It seems that whenever WWE produces a new music CD that the disc is hit or miss. In the case of their latest creation, Voices: WWE The Music Vol. 9, it’s definitely a dynamite smash.

Featuring the long-awaited debut of Randy Orton’s theme by Rev Theory, the title of the album, Vol. 9 has all the latest entrance themes, including the new songs for Umaga, The Great Khali, Kung Fu Naki, Vladimir Kozlov, Maryse and even the new SmackDown theme. 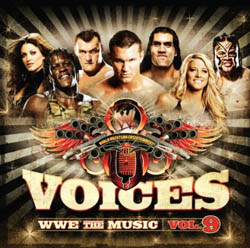 It’s hard to say that there’s a weak track on this CD because in all honesty, there isn’t. Making Orton’s theme the focal point goes along with the Fed’s monster push of Orton as the top heel in the company (Shane McMahon beating him up notwithstanding) and that’s marketing at its best.

R-Truth’s theme is credited to “Ron Killings” and it’s pretty much word-for-word his rapping TNA entrance tune. Jack Swagger’s theme is a part of the CD and along with Orton and Kozlov (whose theme reminds me of Ludvig Borga – remember him?) make the disc worth buying just for those three. However, despite WWE’s efforts to be more family-friendly, Swagger’s theme is titled “Get On Your Knees.” And it sounds like Rage Against The Machine.

Khali’s new theme has a comedic Indian (Punjabi?) tone that totally reflects his new babyface character on TV. Eve and Kelly Kelly have their songs a part of Voices and Eve’s sounds eerily similar to Billy and Chuck’s entrance from years back.

Theme songs seemingly change or are tweaked regularly these days and WWE did a fantastic job in having the newest Kane theme (a remix of his original theme from 1997-98) as well as the newest version of the theme for Cody Rhodes, Ted DiBiase and Manu, also a treat.

Noticeably absent from this compilation, it could be argued, are the songs for Mark Henry, DJ Gabriel, Tommy Dreamer, Dolph Ziggler, William Regal, Mike Knox and The Brian Kendrick, the latter of which should have been on Vol. 9 no questions asked.

As a bonus, if you should happen to purchase this CD at any Best Buy location, a second disc with older WWE wrestler’s themes is included, which maybe isn’t that awesome as five of the nine (The Rock, an Undertaker version, Stone Cold Steve Austin, Jake “The Snake” Roberts and, surprisingly, The Ultimate Warrior) are on other WWE CDs, but the other four (Rowdy Roddy Piper’s newest version, Sgt. Slaughter, the original Hunter Hearst Helmsley and Mr. Perfect) are new to CD.

Overall, Voices is a must-have, even if you don’t have the first dozen or so WWE-produced music discs. It’s the latest and greatest from a company that, though their in-ring action gets a lot of criticism, continues to pop out, for the most part, top-notch CDs and DVDs.