BURLINGTON, Ont. — In the room full of old wrestlers, shuffling along with their hobbled gait and cauliflowered ears, plates of buffet food grasped with thick, gnarled fingers, the Hockey Hall of Fame defenseman stands out.

For one, he’s dressed quite a bit nattier than his wrestling colleagues, the Hall of Fame ring (Class of 1979) the shining testament to his skills. But physically, he’s aged better, or perhaps differently. Hair loss appears to be the main battle against time. 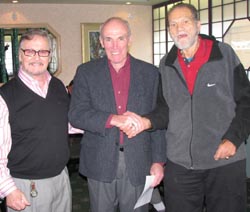 Harry Howell, who played from 1952 to 1976, may not be one of the old wrestlers hanging out for the special Christmas buffet lunch reunion of oldtimers in the Hamilton, Ontario, area, but he is certainly of them.

After all, their lives are not that different.

“I like listening to the stories. They’re like old hockey players. You get a bunch of hockey players, well, the stories get better every year. I think the wrestlers are the same way. At least that’s the way I find it,” said Howell, making his third or fourth visit with colleagues from the grunt-n-groan circuit. “My wife has a saying about old hockey players: How come they get so much better as they get older?”

The same could be said of wrestlers.

Spinning tales the week before Christmas were some of the biggest names to ever come out of Hamilton, Billy Red Lyons and Reggie Love, a Hamiltonian via Scotland, Matt “The Guillotine” Gilmour / Duncan McTavish, as well as a collection of part-timers and local workers, who populated cards from the Golden Triangle down to Pittsburgh: Ron Logue, Ernie “The Executioner” Moore, Jerry Dorsey, Hurricane and Cyclone Smith and Pat Blake among others. Some are a part of the fraternity through family connections, like Jimmy “Red” Simms Jr., whose dad helped train a few of the lumbering beasts. And speaking of beasts, a special import from Toronto is Willie “The Hungarian Wolfman” Farkus, his bark far more undecipherable than his bite. 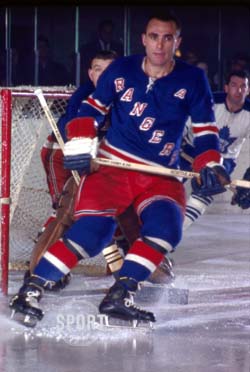 Harry Howell during his heyday with the New York Rangers. Photo courtesy The SPORT Collection

Now a neighbour to Hurricane and Cyclone Smith in a Hamilton apartment complex, Howell admits to having gone to see the matches when he was younger.

“I used to go to wrestling matches too, at the Municipal Pool, years ago. I used to enjoy the wrestling. Whipper Billy Watson, he’d be there. He was a big guy in Hamilton at one time,” recalled Howell.

He rarely got to see any wrestling during his 24 years in the professional hockey, the bulk of which was with the New York Rangers (but also included time at the end of his career with the Oakland Seals/California Golden Seals franchise, the Los Angeles Kings and the World Hockey Association’s New York Golden Blades/Jersey Knights, San Diego Mariners and Calgary Cowboys); rather, it was boxing that held his interest. 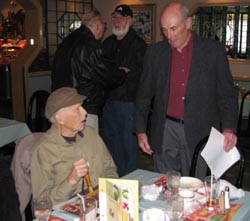 “In New York, at Madison Square Garden, they used to have boxing matches every Friday night. When we weren’t on the road [with the Rangers], I just lived about 10 blocks away, and I used to go and watch the main fights all the time on a Friday night — if we weren’t on a train going to Toronto or Montreal or something like that,” Howell explained.

The 6-foot-1, 195-pound Howell never had any illusion of being a wrestler. “I think to be a wrestler, you’ve got to be big and strong. To make some money, you’ve got to have a bit of a gimmick, I guess, have a fancy name, or wear a mask,” he said. “I was happy with the hockey.”

Having lingered until just Lyons, Love and Moore hold court, Howell said he intends to visit with his new friends again soon.

“I enjoy being with them. They may have been terrors in the ring, but boy, they’re sure gentlemen outside of it.”

Greg Oliver has been to the Hockey Hall of Fame. Not quite the same thing as being inducted.