LONDON, ON — Total Nonstop Action Wrestling rolled into John Labatt Centre for the first time Saturday night for seven matches the night before it made its Canadian pay-per-view debut in Oshawa.

The building, which seats 9,060 for London Knights’ hockey games, was scaled down to about a third of the building for the event. Unfortunately for TNA, only about 500-1,000 fans made the trip out on an extremely wet night. 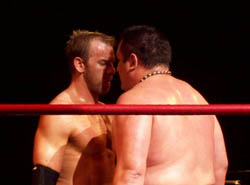 Christian Cage stares down Samoa Joe at the TNA house show in London, ON, September 13, 2008. Photo by Nikki Riches

This was in stark contrast to the last WWE show that ran Labatt Centre, a Smackdown/ECW taping in May, which drew a solid crowd of wrestling enthusiasts.

In the main event, Samoa Joe defended the TNA World Heavyweight Championship, choking out Christian Cage. The match was back-and-forth early on. Christian took control by biting Joe, who was setting Christian up for a move from the top rope. Cage hit a big Frog Splash, but could only get a two count. Following a ref bump, Cage hit the Unprettier, but with the ref slow to get back into position, the move only went for two.

This proved to be the end for Cage, as Joe quickly rallied, hitting the Musclebuster and following it up with the Kokina Clutch. Cage almost escaped, but Joe was able to drag him back to the middle of the ring and completely lock in the hold. Referee Rudy Charles checked Cage’s arm once before calling the match in favor of Samoa Joe.

James Storm garnered the most heat of the night with an anti-Canada promo to start the match, even going so far as to attempt singing the Star Spangled Banner. Some fans on the floor responded with a rendition of Oh Canada.

Chris Sabin got the crowd on its feet by diving over the middle rope onto Storm, Robert Roode, Jacqueline Moore and his own partner, Alex Shelley. After that, Beer Money slowed the match down and used a variety of double-team moves behind the referee’s back to slow down the Machineguns.

Eventually, Shelley was able to tag Sabin. He came in and hit a Tornado DDT on Storm, putting his team in a good position to win the gold.

But the tide changed for good when Moore jumped up on the apron. Sabin went to confront her while Storm tried to attack him from behind. Sabin moved and Storm collided violently with Moore, sending several of Moore’s teeth into the fans surrounding the area.

In the ring, Roode hit a low blow on Sabin and transitioned into the Payoff for the three count.

In the evening’s opening contest, it was an All-Canada triple threat match between Johnny Devine, Eric Young and Petey Williams.

Young immediately ate the Canadian Destroyer and disappeared under the ring. Devine and Williams went at it in the ring for a few minutes until the music hit and out came Super Eric.

He hit a top-rope elbow drop on Devine, but couldn’t convert any further. Williams locked in the Sharpshooter on Devine with Earl Hebner threatening to ring the bell. Luckily for Devine, he got to the rope before Hebner could call the match. Eventually, Super Eric was able to hoist both Williams and Devine on his shoulders and drive them to the mat, where Eric pinned Devine for the win.

The TNA Knockouts Championship was on the line when Taylor Wilde defended against Angelina Love with Traci Brooks as the special guest referee.

Brooks almost immediately asserted herself by kicking out Velvet Sky after Sky tripped Wilde. Sky returned after Brooks was bumped and used spray to blind Wilde. Brooks recovered and saw the spray, but didn’t do anything about Sky being back at ringside. Brooks, though, did play a big role in the outcome as she pushed Love right into a roll-up. A fast three count later and Wilde retained her title.

A.J. Styles got the first superstar pop of the night when he came out for his match against Sheik Abdul Bashir. 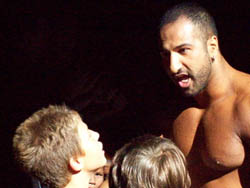 Sheik Abdul Bashir yells at some fans at the TNA house show in London, ON, September 13, 2008. Photo by Nikki Riches

Styles started things out with a springboard crossbody onto the outside, but Bashir gained control from there. Styles would come back with punches and clotheslines before a flying shoulderblock for two.

Bashir would hit a hurricarana from the top rope for two but his own gloating would be his undoing when he tried to hit the Styles Clash. Of course, Styles reversed the hold and hit it himself for the fall.

Special guest Kurt Angle was out next to speak to the crowd. The only thing of note he said was TNA will be bringing SpikeTV with them the next time they come to London.

Abyss took on Rhino following intermission. It was a standard big man power match that built up to a big finish that started with Abyss kicking out of the Gore. Rhino would return the favor later by kicking out of the choke slam. Frustrated, Abyss would grab the ring bell, but swung and missed, allowing Rhino to hit a final Gore for the win.

After the match, Rhino extended his hand in respect, which Abyss accepted only to pull him in for a Black Hole Slam.

In other action, Consequences Creed knocked off Sonjay Dutt in a back-and-forth affair with a backspring roll-up.

After the show, Borash extended an invitation to the meager audience to crowd around ringside and get some autographs from several TNA talents.

Cage, Styles and Super Eric received some of the biggest pops of the night, while the award for most heat, by far, went to Storm.