‘Roughhouse’ Fargo was a wrestling original

When Don Kernodle stood in the center of the ring at the Chattanooga, Tenn., Memorial Auditorium one night in the mid-1970s, everything seemed to be in place — the referee, the fans, and a pair of tough rivals in Dennis Condrey and Phil Hickerson.

But Kernodle suddenly realized one thing was missing — his tag team partner. As he looked toward the audience, he spied his teammate in the second tier of seats, sitting with some women, eating their popcorn, and waving goofily.

That, in a nutshell, was “Roughhouse” Fargo.

It didn’t end there, of course. Popcorn in tow, Fargo raced to the ring, helped Kernodle tie up Hickerson and Condrey and pound the heels into oblivion. The fans ate it up, just as Fargo ate up the popcorn he strewed on the ring apron during the melee. 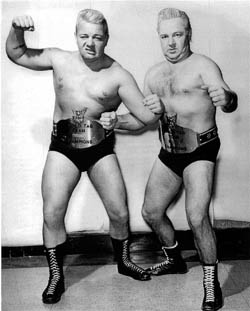 “It was funny as heck,” Kernodle said. “He was a little guy, but he was tough and the fans just loved him.”

Fargo died Wednesday, August 20, 2008, at his home in China Grove, N.C., just north of Charlotte. His passing at the age of 80 represents the loss of a legend who looked like a mild-mannered desk clerk when he wrestled and refereed in the Carolinas, only to morph into an offbeat avenging angel when he hit the mats in Tennessee.

“Sonny was a one of a kind. He was a huge box-office draw for us in Memphis and one of the great people in our business,” said Jerry Jarrett, a fixture in Tennessee as a wrestler and later promoter.

Fargo was born Jack Lewis Faggart, July 20, 1928, in Rowan County, N.C., and lived most of his life in the area. He wrestled mainly in the Carolinas, Tennessee, and the Gulf Coast area, starting in the 1950s. During a career that spanned more than a quarter-century, he worked as the “Masked Rebel,” toiled ringside as a masked valet for the Assassins tag team, and served as a second for the legendary tag team of Jackie (nee Hank), his real-life younger brother, and Don Fargo (Don Kalt).

In his pre-“Roughhouse” days in late 1950s and early 1960s, he frequently paired with Jackie, including once when Don went on the disabled list after accidentally shooting himself in the leg. The Jackie and Sonny show invaded Madison Square Garden several times in 1960 against opponents like the Bavarian Boys, Ricki Starr and Miguel Perez, and the Bastien Brothers.

By the mid-1960s, Fargo was embarking on his unique dual wrestling life in neighboring states. He refereed in Jim Crockett’s Mid-Atlantic promotion, occasionally wrestling on preliminary matches, yet he continued to headline cards in Tennessee well after he turned 50.

His maniacal pretext became part of Tennessee wrestling lore, as Jackie would tell fans two or three times a year that he only could meet a particular nasty challenge by checking “Roughhouse” out of a state mental hospital in Morganton, N.C., to enter battle as his partner. (The hospital is legitimate, though Fargo’s inpatient status was not.)

Clad in old tights and tiny boots, Fargo’s gimmick, even though he was a good guy, was to throw the rules out the window, and maul everyone and everything in sight, including Jackie at times, just like a crazed man who’d been temporarily liberated from a padded-wall cell.

“Jackie just knew how to play that angle of when to get ‘Roughhouse’ and take care of the family chores. When he came, it was ‘School’s out, man!'” explained Lance Russell, the longtime voice of Memphis wrestling. “We could always be assured there’d be a lot of folks in the arena to see the ‘Roughhouse.’ Total craziness.”

Climbing into the crowd, uttering nonsense on interviews, attacking opponents with ketchup bottles or ice cream cones lifted from concession stands — few wildman antics were beneath his standards.

“Sonny had the crazy gimmick and was so successful with it because Sonny made the gimmick real. Most of the fans in our area really thought he was nuts. Whenever we needed a shot in the arm, Sonny would come in to help out. Sonny was a good and decent person,” Jarrett said.

The Fargos held the Southern tag team title for the Tennessee office and worked on and off as a team through the 1960s and 1970s against the Interns, the Von Brauners, and other stars. Russell thought Fargo’s wiry, underwhelming physique, compared with more muscular wrestlers of the day, meshed perfectly with the “Roughhouse” concept.

“He looked anything like a wrestler and I just thought it played into the picture of him not caring whether the opponent was bigger than he was or not. It didn’t make any difference. He’d hit him with anything he could get his hands on,” Russell said.

Tinker Todd, who wrestled him in the Mid-Atlantic and Tennessee, and often traveled with him, marveled at the way Fargo was primarily a low- or mid-carder in the Carolinas before he got the big break across the state line.

Even more memorable to Todd, though, was a serious car accident when a reckless driver near Lexington, N.C., struck Sonny’s Oldsmobile 88. “He and I almost got killed,” Todd said. “We were with Abe Jacobs and I got thrown out of the car and caused myself a little damage.”

Fargo wasn’t above beaning a foe with an oxygen bottle, either, a trick he employed as valet to the Assassins in 1963 during a stint in Florida. Instead of using Fargo as a run-of-the-mill, distract-the-ref manager, Joe Hamilton of the Assassins relied on the valet to revive the team with fresh oxygen during exhausting sequences.

A near-riot ensued one night in Jacksonville, when Fargo brought the bottle crashing down on Eddie Graham, who was a second to the Assassins’ opponents. “When Sonny hit Eddie with it, the sound echoed all through the building. The bottle knocked Eddie cold for a few seconds and left a knot the size of a hen’s egg on the back of his head. Eddie didn’t ask to do it a second time,” Hamilton recounted in Assassin: The Man Behind the Mask.

Back in Crockett country, Fargo was close to the late Johnny Weaver, and officiated at prominent events such as Starrcade. Les Thatcher, who first met him upon entering the Mid-Atlantic in 1963, thought Fargo was an ideal third man in the ring, with an exacting sense of when to insert himself in the action and when to stand back.

“He absolutely understood that. He was a heckuva referee,” Thatcher said. “Matches were better when he was in there because he understood the flow of the match and when he needed to control it, and you just don’t find that in most refs today.”

In recent years, he enjoyed attending the NWA Legends Fanfests in Charlotte and seeing old comrades. He had been in declining health, suffered from diabetes, and was a double amputee. “The thing that just jumped out at me was it hadn’t changed his personality at all. I was so in admiration of that,” said Thatcher, who sat near him at the 2007 fan event. “He was the same character, just laughing and cutting up. He was just Sonny.”

Kernodle and brother Rocky visited Fargo for about 30 minutes at his home last Saturday, knowing he was in bad shape. “He was one of the nicest guys you’d ever want to meet and he was always there for you, helping you in any way he could,” Kernodle said. “We had a lot of respect for him. We loved him a lot.”

Fargos’ wife Delores died in 1999. In addition to brother Jackie, he is survived by a son, Obie; a daughter, Debbie Parson; and numerous relatives. A funeral is scheduled for Sunday at Landis Baptist Church, Landis, N.C.