Wrestling and photography have been synonymous with each other since the inception of portable cameras. Wrestling and San Francisco’s famed Cow Palace have also been linked since the grand old building’s inception in the 1950s. 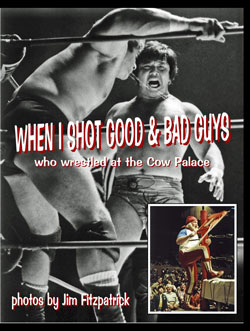 Even though the building has become popular for hosting the west coast legs of such legends as Liberace, John F. Kennedy, The Beatles and Elvis Presley, probably the one most consistent mainstay of the building was Roy Shire’s National Wrestling Alliance San Francisco territory. Names like Ray Stevens, Pepper Gomez, Pat Patterson, Mr. Fuji, Don Muraco and Dory Funk Jr. would grace these hallowed halls all while being photographed by a young kid fresh out of high school named Jim Fitzpatrick. He’d later find fame in another funky California fad — the San Francisco Bay Bombers in roller derby.

Luckily for us, Jim has held onto those images and finally releasing them to the good folks at Arena Publishing, Inc. to produce the author’s second book When I Shot Good Guys and Bad Guys (Who Wrestled at the Cow Palace).

Like most wrestling photographers Jim Fitzpatrick started off as a fan regularly attending shows at the Cow Palace always equipped with camera in hand. One day, bringing samples of his work with him, he built up enough courage to show the ringside announcer his work, who urged him to contact the company’s publicist, and as they say, the rest is history.

Now most fans today are accustomed to the very sleek, sharp, clean images produced by thousand dollar high tech digital cameras that are accompanied with even more thousands of dollars of lighting an flashing rigs — but it wasn’t always that way. What makes one appreciate the gritty photographs in this book even more is that they were taken with a fully manual Pentax camera, a far cry from today’s point-and-shoot, idiot-proof cameras. Aside from having to always keep one eye on the action and using a camera like that, you would have to keep the other eye on the focus ring, light meter and shot frame.With over 100 pages of photos this book is a wonderful collection for any fan of the sport — or art.

From Battle Royals to Dog Collar matches, Jim was close enough to the action to catch it all. Sometimes he even caught a little too much! “One time I had my mouth wide open and suddenly Don Muraco received a chop from Dean Ho. Spit came flying out of Muraco’s mouth and right into mine!” he recalled. With that kind of positioning one can only enjoy the quality of photographs capturing the action and preserving these moments in time.

Highlights of this nostalgic look into the Bay area wrestling scene include photos of aerial shots or mid-flight photos of greats such as Pat Paterson and Mr. Fuji, and a really neat Don Muraco spit shot.

My one and only fault with this book is that the original format of photos were taken in colour but aside from the covers (front and back) all the photos are printed in black and white, probably in an effort to keep the printing costs down.

MIKE MASTRANDREA is the resident photographer at SLAM! Wrestling.