For a music CD to go high on the charts, it has to be something special or unique.

The WWE’s latest compilation, Raw Greatest Hits: The Music, is neither. In fact, if you have any of the WWE’s previous CD collections, odds are you already have 80 percent of these songs already.

The two tracks at the end of the CD, designated as the aforementioned “bonus” tunes, are Melina’s current theme (formerly MNM) and a Mr. Kennedy mix of old intro and new song. The MNM theme a greatest hit? Please. Are you kidding me?

Granted, this CD does include Stone Cold Steve Austin’s epic music as well as versions of The Rock’s and The Undertaker’s, but nothing from Bret Hart, which is a major oversight. No Hitman, but we get Rey Mysterio’s old theme. If anyone can point out when Rey was a member of the Raw roster, do let me know. Maybe I’m being petty here, but if a compilation is Raw-based, why have an incumbent Smackdown superstar’s theme? 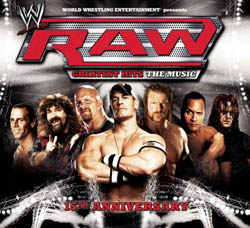 And no Bret Hart. Or Ric Flair. So what, I’ll give a “WOOOOO!” just for good measure.

The other themes included are those of Batista, Evolution (probably the best one on the CD, but it’s also on ThemeAddict: WWE The Music Volume 6), Trish Stratus and Kane. Where is Razor Ramon, Diesel, Randy Orton, The Dudley Boyz, Ahmed Johnson, Lita, The Hardy Boyz (now Jeff Hardy’s theme), Kurt Angle, Edge, or even the friggin’ 1-2-3 Kid and the Spirit Squad? I could go on and on. And WWE couldn’t get the rights to Jimi Hendrix’s classic Voodoo Child?

Should we also be surprised that neither Chris Benoit or Eddie Guerrero are nowhere to be found?

It would also have been a nice touch to add Jim Ross and Jerry Lawler to the mix, but WWE appears to have drawn the line much too soon on where to stop including certain music. It might have also been cool to include memorable on-air calls and promos from the Raw years.

Basically, this CD is just a quick run-through of some of Raw’s top stars from over the years. Even so, this CD seems like it was rushed to production as there are many oversights and glaring omissions. Too, this may be OK, as at least most of these songs are available on other discs and, well, LimeWire.

Might we get a Smackdown greatest hits later on down the road? Perhaps. Maybe that one will have Bret Hart’s song on it. Ya think?

Buy at your own risk, people.