While the MTV wrestling show Wrestling Society X failed miserably on TV, Big Vision Entertainment has come out with a four-disc set of the show in its entirety, plus a multitude of extras, including the unaired series finale, that make this set a definite keeper for any true wrestling fan.

Or just for any fan that needs a non-WWE fix. 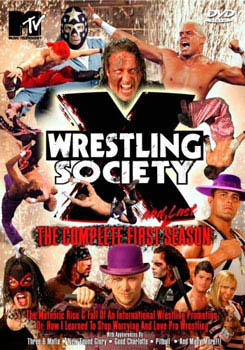 Seriously, if you blinked, you missed WSX. It was only a 30-minute show and only nine episodes aired on MTV, but it featured established and up-and-coming stars such as Vampiro, Sean “6-Pac” Waltman, Teddy Hart, Matt Sydal, Ricky Banderas and Jack Evans.

This DVD set, entitled Wrestling Society X: The Complete First (and Last) Season, has all of the aired episodes with no commercials, plus the tenth episode that includes a Piranha Death Match between Los Pochos Guapos and The Cartel and an Exploding Steel Cage Timebomb Death Match between Dragon Gate and Teddy Hart and Matt Cross.

Some may argue that WSX didn’t catch on with mainstream wrestling fans due to it being on MTV and not having a plethora of “name” wrestlers. But that’s exactly why many fans latched onto the series, including myself.

I liked how the show always had musical guests, including Three-6 Mafia (yes, I’m a fan), Good Charlotte and New Found Glory and the artists joined broadcasters Kris Kloss and Bret Ernst to call the matches. The artists seemed to all be fans and mentioned wrestlers from the ’80s who were their favorites growing up.

The extras on the four DVDs are solid. The Internet-only WSXtra bonus shows are all shown in their entirety, deleted and unaired scenes and virtual trading cards add to this collection. There are also clips of casting tapes of the wrestlers who eventually made up the WSX roster, including some good stuff from Evans, Ruckus and Kaos, and, good Lord, Lizzy Valentine and Lacey bikini videos. Four music videos highlighting Vampiro, Luke Hawx and Alcatrazz, That 70’s Team and The Trailer Park Boyz are also included, along with a vignette on the WSX ring announcer, Fabian Kaelin.

There is also an interactive script gallery, but if you’re into kayfabe, I suggest skipping this section of the set.

Hiden Easter eggs also can be found on each disc by hitting “up, up, down, down, left, right, left, right” when on the “walking down the hallway” image before the main menu.

In watching this DVD set, I came to the realization that WSX was a gem of a wrestling situation that never caught on and that’s a crying shame. Sure, it was held in a small makeshift arena in front of crazy twentysomethings and things exploded and fireballs were thrown (a subtle hint to check out the Vampiro-Banderas incident), but that’s what made it different. It wasn’t created to compete with WWE or even TNA, but it was a change from the norm.

During this day and age, don’t we need that? If you do, pick up this four-disc set. You’ll also remember that WSX had a “world” champion – two, in fact. There is a LOT of material to sift through, but it is worth your time and effort to check it out. It’s a quick look at WSX both in the ring and out and to see many wrestlers before they inevitably make it big elsewhere.

For the most part, the wrestlers are fairly green (at least from a common fan’s perspective) and at times it shows, but what other company out there can boast a TLC (Tables, Chairs and Cervezas) Match? Just Wrestling Society X.

It’s too bad it went down way before it’s time. But its memory lives with Wrestling Society X: The Complete First (and Last) Season.