Looking at the cover of The Best of Chikara DVD, one can plainly make out that this disc features Lucha Libre wrestlers and Claudio Castagnoli – a circus act? Pretty much. But the wrestling is top notch.

I will admit that before I watched this DVD, I had to do some research and find out what exactly Chikara is/was.

Turns out it’s a Philadelphia-based promotion with a Lucha Libre- Puroresu- British- American style that is marketed as an alternative to mainstream wrestling. You bet – it’s awesome! 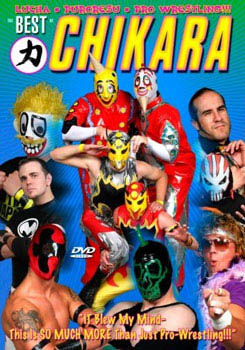 The matches (all from 2005 or 2006) take place in small venues, mostly high school gymnasiums, but the few fans in the crowd seem to enjoy the action. As did I. In these days of WWE and TNA seemingly pumping out a new DVD once a month, seeing a small promotion with up-and-comers is a refreshing change. If nothing else, it makes you think that the big-name superstars began this way and who knows, maybe down the road a Chikara wrestler will be repackaged and end up in the Fed or Orlando.

The Chikara style is a high-flying, Ring of Honor-type. The broadcasters are still green, but still call a great match. This DVD may not be much, but from past experiences with Big Vision, they don’t put out just any old collection.

Featured matches on The Best of Chikara:

The small selection of special features includes bonus matches, a cover gallery, trailers and interactive menus. For what appears to be a small-budget promotion, even having something that can be construed as a special feature is a plus.

All in all, this DVD shows the potential for the Chikara promotion and showcases top indy stars of today, such as Castagnoli, Hero, Sweeney and Quackenbush.

And for under $10, picking up this DVD won’t break the bank. And you may just want want to watch over and over.