To say I have deluged with questions of “what was it like to wrestle in a fire?” and “were you scared?” could not be more of an understatement.

For those of you living under a rock, at TNA’s Hard Justice PPV, Eric Young was in the midst of getting the beating of his life, by yours truly, when some pyro equipment accidentally lit a burlap bag suspended above the ring on fire. As the fire was brought quickly under control, the ring was filled with smoke and flame retardant making breathing all but impossible. 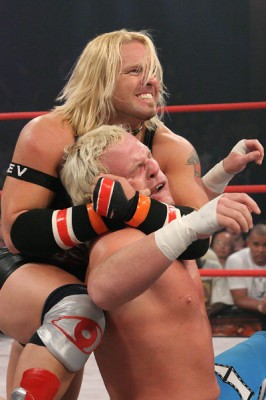 Johnny Devine gets the better of Eric Young at Hard Justice. – courtesy TNAwrestling.com

In answer to the continuing questions: It was crazy. I couldn’t breathe or see ,and didn’t know if I should roll out of the ring and head for cover or wait it out and take my chances. Was I scared? No. Was I coughing up a lung and blind? Yes.

Just to give you an example of how bad it was — the chemicals from the extinguishers ate my singlet that I had worn that night.

As a testament to how tough he is, Eric Young was able to, in the end, get the best of me after said insanity. I truly feel that if things had been different and there had been no fire, there would have been no question that Eric would have been fired from TNA that night as I was firmly in control until all hell broke loose. Literally.

But I am certain I will have a chance to exact some revenge in the future as TNA in a small place and Eric can only hide for so long.

Hard Justice on the whole, after the fire fiasco, ended up being one of TNA’s best PPV offerings and will definitely go down in the weird crap at a wrestling show record books. Personally I thought the three way between Monty Brown, Rhino and Samoa Joe stole the show. But there are cases to be made for a lot of the matches that night.

Kudos have to go out to the TNA office for bringing it all back together and putting on a hell of a performance in the face of adversity and fire marshals!!

Speaking of fire marshals, a special mention must be made to Bob Ryder who refused to leave his headset position during the whole ordeal to try and keep some semblance of order in the chaos. Good on you Bob.

Coming up this Friday and Saturday I get to make a long-awaited return to the rings in Calgary and Edmonton! Friday, I will be at the Ogden Legion of Doom in Calgary for Stampede Wrestling, taking on my old arch nemesis “Dirty” Duke Durrango in what will be one of his last matches, as he has announced his retirement recently. I can’t wait to lock it up with Duke again as he and I broke in together in the Dungeon and he’s one of the guys who truly brings out the best in me. And to say we have been up and down the road together and beaten each other to hell and back is a HUGE understatement. Duke is definitely one of the toughest guys I have ever met in this business and I am sure this weekend will be no different than any of the other times we have faced each other. A tear-the-house-down match, followed by lots of Advil and Aspirin to help take the hurt away!

The next night I will be in Edmonton at the NAIT gym for the Prairie Wrestling Alliance, one of my all-time favourite promotions and venues! The talent there is always top notch and I look forward to seeing the great Edmonton fans again. It’s been a while since I have been back and I hope the fans in Edmonton haven’t forgotten the good ol’ Hotshot! Guess we’ll see this weekend. Hope to see a lot of the old faces out at the shows and some new TNA fans in the audience to check out some great indy wrestling.

In the mean time and in between time, that’s it, another edition of the Devine Intervention.