While it wasn’t a sellout, the approximately 3,700 in attendance saw history made with the event and according to promoter Rudy Hill of Bizzar Tours, “Next time, we’ll be back in an even bigger way.” 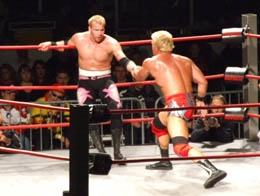 NWA World champion Christian Cage retained his title in the main event against Jeff Jarrett in a match both had won with their respective finishers, but referee Rudy Charles took a bump from Cage against the turnbuckle. Cage took two chair shots to his injured ribs on the floor, but recovered. The two then exchanged sleeper holds before Charles took the cruncher in the corner. America’s Most Wanted entered the fray with Charles out and double-teamed Cage. Cage fought both Chris Harris and James Storm off before Jarrett pounced for the Stroke. Cage countered the maneuver with the Unprettier and as the ref crawled back into the ring, Cage got the 1-2-3 for the win.

Abyss attacked Cage from behind, only to have Rhino make the save. Samoa Joe, A.J. Styles and Sabu soon joined AMW in a pier-sixer. The faces cleared the ring and the heels bolted for the back. Sabu and Rhino then went to leave, only to have Captain Charisma call them back. Cage then thanked the crowd and said he’d be back because “that’s how I roll.” He then made his rounds around ringside slapping hands with the fans and even stayed 20 minutes after that signing autographs in the aisle.

Prior to the match, Jarrett took tremendous heat from the crowd after calling Detroit the “cesspool of North America” and when he heard TNA was coming there he “wanted to puke.” Jarrett then said that not only does Detroit have a joke of a hockey team, not just the Red Wings, but the one that plays at Compuware (Ontario Hockey League’s Plymouth Whalers), but also a joke of a football team, baseball and basketball teams.

Cage then came out and said that his “peeps” all think Jarrett is an asshole. The crowd erupted.

Fans came to Plymouth from all over the country, including a strong contingent from Canada. Several Canadian flags were scene in the crowd when Team Canada was wrestling as well as during Cage’s entrance, which was the biggest pop of the night.

“I only watch TNA,” said fan Ian Meadows of Jacksonville, N.C. “It’s the only real wrestling out there. With TNA, you get all good matches instead of a bulls**t 30-minute interview, commercial break, backstage and then maybe a match like on WWE. Plus, Samoa Joe and Sabu are here and there was no way I would miss them.”

Ed Chuman, on the Board of Directors for the NWA in Chicago, took in the event as well and said he was there to see “the jumping off point for TNA.” Chuman is the liaison between NWA and TNA and wrestled in the 1970s.

“This is a historic venture for the company,” said Chuman. “They’re trying to expand their TV audience and by bringing this show to the fans, I believe it will be a catalyst for the future. In a perfect world, this would have been a sellout, but any more than 3,000 is a success in my opinion.”

Ring announcer Jeremy Borash kicked off the event and was well-received by the crowd. 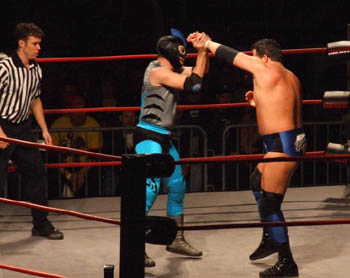 A great opener, with both hitting high-flying moves and gaining near falls. Shark Boy takes the duke with the Dead Sea Drop out of nowhere.

Two Michigan natives in this one, with each getting over with the crowd. Sabin gets two two-counts near the end with a Michinoku Driver and then a frog splash. Both go back and forth with high-impact moves before Sabin nails the Cradle Shock to put away Shelley.

The Insane Clown Posse come out to the ring and cut a promo on where they’ve been wrestling-wise. When they say they once worked for the (then) WWF, boos erupt from the arena. Violent J does most of the talking and seemingly ends the promo by saying the duo is due for tag team gold and it’ll happen down the road in TNA. At this point Team Canada’s Scott D’Amore, Petey Williams and Eric Young arrive. D’Amore calls ICP “second-rate rappers who stole Kiss’ gimmick and kissed Howard Stern’s ass.” Team Canada and ICP both appear to leave the ring, but Williams and Young jump ICP from behind. The bell rings and we have…

The clowns work well with Team Canada and sell even better. Of course, D’Amore interferes and ends up in the ring. Shaggy rips D’Amore’s glasses off and D’Amore grabs the first person he feels, Williams, and hits the Canadian Destroyer on him. Yes, that’s not a typo, D’Amore hit the Canadian Destroyer. Violent J gets the cover and the win. D’Amore celebrates, but turns around to see Williams down and the clowns celebrating. 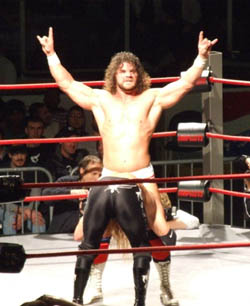 Bobby Roode basks in his domination of Jerry Lynn

Windsor’s Jeffrey Scott is introduced as the ring announcer for this match because of his Canadian heritage. The match begins with several rest holds, but soon picks up. Lynn rams Roode’s head into the top turnbuckle five times, the middle one four and once on the bottom. Roode bails to the floor, but Lynn meets him with a tope from the apron. A solid outing from both grapplers that features at least a dozen two-counts, Roode gets the win as he sat out a sunset flip attempt from Lynn and grabbed the middle rope for leverage.

Sabu hits several monster spots including a dive from the top rope to the floor that started from a chair set-up in the middle of the ring. Another spot saw Sabu land a moonsault from the top rope again off a chair leap, only to not be able to cover right away as he landed awkwardly on his right knee. Abyss brings a table out from under the ring and attempts to power bomb and then chokeslam Sabu through through the wood. Sabu averts both, goes to the top with a chair and nails the Arabian Facebuster while in the process putting himself through the table. A three-count later and Sabu wins.

After an intermission that had Cassidy Riley and TNA Knockout Traci Brooks sign autographs and pose for photos on the concourse with Borash, Traci is then introduced by Borash and comes into the ring to, well, jump around. Borash says she has a T-shirt she’d like to give away and she makes a ringside male a happy customer…with the free T-shirt.

Rhino, from nearby Dearborn, is very over. After chasing D’Amore into the ring, Rhino drills him with the Gore and then lines up A1 for the same fate.

In a match taped for Impact!, early action was outside with Joe getting a 50-foot running start and kneeing Styles into the guardrail. Minutes later, Styles hits an over-the-top suicide dive onto Joe on the floor and chants of “This is awesome!” engulf the arena. Joe nails a power bomb, into an STF and then into a Crossface, but Styles escapes. Joe then locks on the Kokina Clutch and modifies it into a sleeper-chinlock variation and Styles is out.

It wasn’t announced as a title match. A typical match for these two, a huge Tower of Doom lands all four on the mat late in the match. James Storm goes to toss powder into Andy Douglas’ face, but the Natural lands a kick that knocks the powder into Storm’s eyes. Storm then hits a swinging slam on partner Chris Harris. With the ref on the outside breaking up Chase Stevens and Harris, Storm hits Douglas’ injured left knee with a chair shot and gets the pin. EMTs come down to help Douglas, but he gets to his feet to some applause and is helped to the back by Stevens.