WINNIPEG – Ask “The Mecca” Shane Madison what it has been like to be part of the emergence of Action Wrestling Entertainment on the wrestling scene and the stories come pouring out.

“This started out as a pipe dream. Many guys were of the attitude of, ‘We’ll believe it when we see it,'” he told SLAM! Wrestling. “I was the same way for a while as I have heard it all in this business. However, every promise AWE has made they have delivered on and then some.”

In an unusual step for most aspiring wrestlers from Western Canada, the 28-year-old Madison, who grew up in Winnipeg as Jeff Wallace (“a wrestling fan and then some”), headed east to earn his spurs when he first broke in. 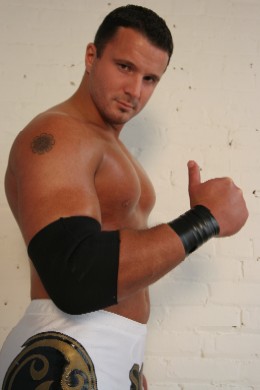 “I was trained in Windsor, Ontario in 1998. I met a guy named Scotty Libido who got me in tough with Professor Maxwell of FMV fame,” Madison said. “Maxwell was an old school hard-ass. They busted my balls and I wouldn’t have it any other way. We trained for three nights a week, four hours a night in some warehouse in a boxing ring with no spring in it. I lived in a house with rats and mice and I had to hang my food from the ceiling so the rodents would not eat it. It was hardcore. I doubt most greenhorns could work a full-time, manual-labour job, train for three days a week for four hours a night for just a chance to make it. Personally, I could count the number of guys who could absorb that punishment on one hand and still have fingers left over. It was tough but it taught me the respect that a lot of guys are lacking nowadays. ”

The first AWE show was actually in November 2003 at Coyotes Night Club in Winnipeg, and drew about 400 people.

“That was more of a test run for us. We didn’t want to be known as a bar show. There were a lot of people wanting to see the first AWE show fail. There was a mass exodus of talent from another local company, a safe weekly bar show promotion but it barely drew 30 people on a weekly basis. AWE was not a sure thing; a lot of guys gambled and burnt some bridges for the good of a better vision of the wrestling business.”

In earlier years the 6-foot, 220-pound tanned and toned Madison was around locker rooms with the likes of the Road Warriors, Honky Tonk Man and Brutus Beefcake. That first AWE card featured a number of imported wrestlers who Madison was very impressed with.

“Having Dan Severn on the inaugural show was very important. He is legitimately one of the toughest guys in the world. Plus, he helped us attract that MMA demographic that has been growing in popularity over the last few years,” said Madison. “Donny DiCaprio looked fantastic in their MMA exhibition bout. DiCaprio is a guy who has been training in MMA over the last few years and is extremely versatile in both professional wrestling and MMA. The MMA match really suspended disbelief and Severn really gave DiCaprio a chance to prove he could hang with him. That was very unselfish of Dan and he will always be a regular in AWE.”

On that first show, Madison teamed with Buff Bagwell in the main event against Chi Chi Cruz and Outlaw Adam Knight. Bagwell has “tons of charisma,” said Madison, who was also impressed by a Toronto import. “When Notorious T.I.D. came in from Toronto, it gave AWE a profile in Eastern Canada that most anyone operating from here except for Tony Condello never get. And T.I.D. helped a lot behind the scenes that day. He’s back with us for this week’s show.”

“Outlaw” Adam Knight, who has been a frequent opponent since Madison returned from Windsor and began his pro career, has high praise for his dedication to maintaining a major league aura. “Shane has always set the bar very high for how a professional wrestler should look and act outside of the ring. That may be a little too high for a naturally heavyset guy like me who never skips a buffet and isn’t married to a tanning bed like Madison is, but seriously he has all the tools and is one of the most recognized performers in Central Canada.”

Realizing that the size of his desired operation required a more elaborate financing plan, AWE promoter Mike Davidson set out to bring in more capital and marketing expertise. It took over a year until the next AWE event, when, on March 11, 2005, AWE presented Larger Than Life, a show taped for pay per view at the University of Manitoba.

“It is funny because a lot of people still wanted to see us fail. No matter which way you look at it the event was a success,” Madison said. “The show was not perfect by any stretch of the imagination but it was a good show.”

Madison thinks the emphasis that AWE puts on bringing in big names to augment and mentor the resident Canadian wrestlers has worked out very well. “A lot of the time when big name talent is brought in they are difficult to deal with. However, all the superstars that we have brought in have been a breath of fresh air. Having guys like Hacksaw Jim Duggan, Jamie Gibson (Noble) and The G-Man (Formerly WWE’s Billy Gunn, now TNA’s Kip James) around only helped the AWE talent. They are willing to give back and help the younger guys better themselves. They teach locker room etiquette, and how to conduct yourself as a professional. Those are lessons that are invaluable. Plus, they make our shows that much more credible and can help get guys booked in other territories. You will see a marked improvement in the AWE roster because of the experience that the big names bring with them. ”

Still Madison isn’t satisfied that the image of the wrestling game in the crowded Winnipeg market sometimes stands in the way of getting a fair share of attention from the media. “We had a lot of sponsors and celebrity media personnel out with AWE Superstars to promote the last show. Sometimes it is a little disheartening because wrestling has always been the ‘bastard child’ of the sports world. If another professional sports organization would bring world class athletes to a show of this magnitude they would get more coverage than what we receive.”

Looking forward to the October 8th taping for the new weekly 30-minute show, AWE Overload, for The Fight Network, Madison said the established talent and Canadian indy performers gives the fans a unique event to enjoy. “Our Director of Operations, Mike Davidson, tries to mix the best young up and coming superstars with some key international superstars like Fatu. It can be a delicate balancing act. You need to have the ‘big stars’ to attract the PPV providers and the DVD distributors but we also have a lot of talented individuals from across Canada that are just looking for a shot at the big time.”

Madison singled out Western Canada veterans like Chi Chi Cruz and Massive Damage as high quality, and the young guys of Massive’s promotion MPW in Edmonton like Bobby Sharpe and AllStar Tom McDonald. He called local grapplers Synn, Jon Cutler, Shawn Houston and Kenny Omega “tremendously talented individuals” and believes that established names like Johnny Devine, Billy Kidman and Brian Christopher bring an “X-Factor” to the show. “It is a balancing act for sure, but with all these ingredients, it makes for a great show and makes the boys extremely well rounded. The fans won’t be disappointed and neither will our TV audience.”

Despite a nickname like “The Mecca”, Madison doesn’t believe the show always needs to be about him. “Mike Davidson always joked about how I have been on all of his big shows but I have never worked a big name for him. So those people who say I get preferential treatment are very wrong. I remember when Mike brought in Eddie Guerrero for a show in 2002 and he wanted Eddie to work with me. But I suggested another local wrestler would be better suited for that spot and I was right. That was the best decision for the show.”

After years of plying the local circuits Madison had to cut back and focus on a more balanced approach to life. “I was a very selfish person and my only concern was wrestling. That bubble burst last year and I grew up a lot. I didn’t want to be another ‘wrestling casualty.’ The business will chew you up and spit you out if you let it. Lucky for me I realized that early in my career and not in the twilight. I matured as a person and I like who I have become. I have a great career as an insurance broker, but with AWE located in Winnipeg, I have the chance to be part of the limelight without having to sacrifice a business career. Wrestling is an ongoing learning process. You never know it all and you continue to learn all the time.”

Madison has definitely paid his dues and it has been noticed. He has had three meetings with WWE officials, an invitation to an Ohio Valley Wrestling tryout last March, and he was among the 75 finalists for WWE Tough Enough III.

“I certainly don’t know it all — and don’t pretend that I do — but I think I can offer a lot of insight into this business. I take wrestling very seriously. Sometimes I bring concerns up to Mike and he gets extremely mad at me. We have had some really intense yelling matches so contrary to what people say I am close with Mike Davidson but mostly on a business level. I am just happy to be a part of something that I can be proud of and attach my name to. Other workers would kill for this opportunity so I hope the guys who work here seize the moment and ride the wave of success.”

Check out www.aweheat.com for more details of the October 8th Back 2 School Bash TV taping at the Investors Group Athletic Centre in Winnipeg and to read Shane Madison’s new weekly column.