HAYWARD, Calif. — APW and Pro Wrestling Girls Association joined forces for the first time for APW’s 8th annual Halloween Hell weekend. The highlight on Friday was the ChickFight ’04 Tournament, which set up the final between Melissa Anderson and Princess Sugey Saturday night.

This is the first time APW has had a two-day tournament for their annual spectacular,like their historic King of the Indies (KOI) tournament in 2001 that first paired the world’s greatest talent like Chris Danials, Low Ki, eventual winner American Dragon, Super Dragon, Doug Williams, Samoa Joe, Frankie Kazarian, Mike Modest, Donovan Morgan, Bison Smith, Spanky, Scoot Andrews and more. The APW has served as the inspiration for Ring of Honor and great promotions, utilizing the top indie talent on the planet. 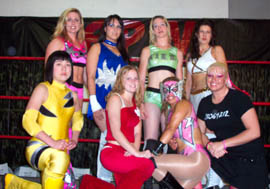 Perhaps one day, those eastern promotions will see pure wrestling matches with women of this calibre.

The girls worked out earlier in the day and Princess Sugey from the Monterrey, Mexico all-women’s promotion (Sara Del Ray from Iron and others have competed there) impressed everyone by being a real shooter and wanting no light. She is very tough and could easily keep up with any ROH-type athlete, as could Melissa Anderson, second generation wrestler. Melissa’s dad Doug used to team with Bill Anderson and the late Louie Spicolli.

When the show started, with all the APW staff dressed to the nines, all the entrants in the tournament came to the ring with a Chick Fight 2004 shirt on after a cool video history of women’s wrestling was shown. This was exactly the classy way KOI was done in 2001 that impressed Dave Meltzer, Bryan Alvarez (who also wrestled!), historian J Michael Kenyon and so many wrestling reporters who flew in for that event. Each one did a short, shoot promo about themselves.

Candice, who competes as a Canadian and is currently training/working for Jesse Hernandez EWF in San Berdo, Calif., didn’t get in much offense, and the masked Sugey was out of this world stretching her, chopping the hell out of her (we’d see that in nearly every match with these female Flairs) and using a lot of innovative holds and submissions in the Sayama Japanolucha style. Sugey also can work the crowd great, pretending not to know English (she is fluent in Spanish primarily) and saying “por que?” each time one of APW’s two female refs would disipline her (Christina McGraw, Dina Massaro). It’s pretty cool that APW has been so progressive the past three years with talented female refs and a female ring announcer(“Betty Beefcake”). Sugey advances.

Anderson, the Cauliflower Alley Clubs’s 2004 Future Legend (holder of the same title belt in APW currently) had a ****+ holds/maneuvers match with Nene Kimura, who is training for the next few months at APW before returning to JD star promotion in Japan. They continued the feud they had from the last big Gym Wars three weeks ago when they tore the house down for that main event. This was an even better match, if that’s possible, which had all the psychology, rationale, moves and escapes so many cry for at WWE and elsewhere–and this was a women’s match. Could’ve easily been part of a Wrestlemarinpiad joint show in Japan–it was that good and Nene can work the crowd too. Melissa has already put in her four months in Japan (she’d like to go back one more time besides more trips to Mexico and Germany). Les Thatcher and so many at WWE are already impressed with her after seeing her work at OVW. Both do the AJW screeching bigtime and were really intense for this, Nene doing the Japan hairtossing of Melissa all over the ring. Melissa got a surprise submission out of nowhere with a move I’ve never seen before. I’m sure they’ll be feuding and giving more state of the art female matches at APW before Nene sadly has to return back to Japan. Perhaps the best technical match on the show, and that’s saying something. I can’t say enough great things about this ROH/KOI type match but what else would one expect from these two pros?

Roxx was trained by Walter Kowalski and has worked extensively for Sheldon Goldberg’s NECW promotion and so many others in the Northeast as well as Japan! Hailey Hatred did some awesome power moves ala Pink Cadillac from Florida days (and has also had a nice Japan run herself). The crowd kept chanting “barbi doll”–hey, we’re all admittedly sexist at heel Hatred and although she was a bit nervous, she really went into fifth gear as did Nikki. The sexist animal I am, I have to admit besides being a totally credible athlete, Nikki has perhaps the best body on a female wrestler I’ve ever seen which good or bad is so important in North American wrestling. Just a beautiful girl, but once they started with the moves and counters; you mentally put that aside and focus on the ability portion. Nikki is another who should be looked at by WWE bigtime after Melissa and Nene. And she really knows how to work the crowd, and showed a lot of great reason for doing things, psychology–totally refreshing. I should mention all the APW guys in the back were watching/studying all the matches big time and applauding big moves, including one of the top trainer/wrestlers in Robert Thompson. That was cool to see, as well as the boys wincing when the girls did legit painful stuff to one another. Nikki got a surprise roll-up and win on her larger opponent who went ballistic. Good stuff.

Christie Ricci(who swears she didn’t take the name from the actress) got a surprise pin/win over APW’s own rookie star Tiffany, the Mafia princess. This was Tiffany’s best match I believe I’ve ever seen, and that’s saying something since she’s worked on APW supercards with her trainer Melissa and Nene. Lots of new moves and psychology from Tiffany which was cool to see since she’s a real sponge for knowledge during training. Sexist pitch (that’s going to happen when the lady wrestlers are all so cool looking): Ricci is one of the tallest, well conditioned (not quite like Nikki) blonde athletes I’ve ever seen–looking to be over 6′ tall. Gorgeous babyface who the crowd was in love with, with many chanting her name in a good way. Tiffany did all her heel stuff and they worked well together. Even match up but Ricci advances. She’s from Hendersonville, TN and a big fan natch of the one and only Eddie Gilbert who we all love and miss.

The APW wrestlers weren’t booked to take any spotlight away from the purpose of the evening–the ladies matches were the main deal. That was classy and the boys graciously acknowledged the women were the stars of the night. JJ Perez watched the match ringside with his belt over his shoulder. All the APW males were in it plus the two Japanese stars and one big tall Hispanic guy who looked like Big Joe from Oregon/Washington. The two Japanese greats were left in the ring with the heel vampire Billy Blade and finally the amazing Asian Cougar tossed out Billy. There was also cool spot harking back to the Lebell/Shire ’70s battle royal days with a multi-man, football type pileup and pin. Great battle royal and now a dream match Saturday night with JJ defending against Asian Cougar!

In the first of two semi-finals in the tourney, Princess Sugey had a drag-out, kickass match with Nikki Roxx before winning with her unusual leg and arm submission that looks like a chiropractor’s nightmare. After Nikki was forced to tap out (selling the pain well–that’s something else all the women did was show great selling when necessary), Sugey kept reapplying the hold and pointing to herself, demanding all of us photographers to keep taking pics of her. It was something else and again Nikki Roxx is a class athlete, as were all the girls or they wouldn’t have been flown in.

Melissa beat Ricci in a deservedly lengthy, 22-minute classic that began like the previous semifinal. Both semis had good displays of mat and chain, great psychology and selling, good give and take, innovation and creativity. The lack of pushed T&A is refreshing and all I can say is this Japanolucha style was well done by all the international athletes APW has and also brought in with Randy Powell’s help for DVD and tapes which is the current way to market matches one could watch over and over. These two top-name wrestlers hadn’t met before and began with great mat and chain wrestling and counters to see how far they could push the other. Both had shaken hands before the bell but the local California fans know you never count Melissa out–she’ll be as aggressive as possible without going full-fledged heel. The crowd was evenly divided with cheers for both, and by this point they were hoarse because all the wrestlers had really stepped it up a notch beyond the typical North American “girls match” to closely resemble a King of Indies, Ring Of Honor pure wrestling match of skill.

For most of these matches, and especially the last two semis, the fans gave standing ovations. After the show was over, all the women entered the ring and had Olympic style rings on banners put over their shoulders–totally class Japan-style that had occured at the 2001 KOI. This two-day series will be as important and influential. These lady wrestlers can hold their own with anyone. Hats off to APW for creating memorable history once again.

The historic Halloween Hell takes place Saturday at 6 pm PT at APW dojo/Arena. Matches include: Robert Thompson versus his arch rival Orlando Mathias in the big cage; APW highflying champ JJ Perez (fresh from his latest Japan tour with Jardi Franz) defending versus Asian Cougar; and the main event tourney final–Melissa Anderson wrestles Princess Sugey in what should be 5 star++++.

I forgot to mention in APW training pre-tourney show last night, Melissa Anderson and Princess Sugey(pronounced Sue-hee) who does the hilarious and dead serious promos in Spanish really impressed one another, having never met. When they locked up, they began pounding each other in the chest to test each other; then doing a mat/chain clinic while everyone watched. Sugey thought the girls would be all powder puffs who hadn’t competed in the full ladies group in Monterey, Mexico that occasionally contracts out to Paco Alonso, but she was impressed with Melissa. I belive Nikki, Ricci and Hailey Hatred have all competed for that LLWF group there.