The only poems many wrestling fans appreciate are the raps that John Cena throws down as promos, or the ones Leaping Lanny Poffo used to throw out into the audience on frisbees. Toronto author Michael Holmes is hoping to change all that with the release of Parts Unknown: Wrestling, Gimmicks and Other Works, his poetic tribute to sports entertainment. 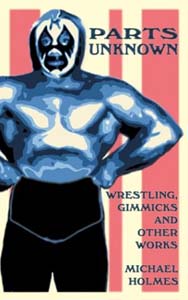 With its release through publisher Insomniac Press, Holmes hopes the book will be a good introduction of this literary art form to a relatively new fan base.

And despite the fact that most popular wrestling books tend, like Foley’s best-seller, to be biographies, Holmes believes that discerning fans will also be able to appreciate other types of work. Particularly as he sees a lot of similarities between wrestling and poems.

“Poetry, more than all other literary forms, is most like wrestling. For the most part, there’s always a form to a poem, just like there is in a good wrestling match. Two guys can’t just go into a ring and throw each other around and have a four-star, five-star match. There’s a frame to a match, they’re telling a story. That kind of planning needs to go into a good poem. I’m trying to shape the poems into something meaningful.”To that end, the book is a definite success. In the book’s 30-plus poems, Holmes pays tribute to all aspects of the industry, covering life in and out of the ring. Subjects include the top stars of the business (in poems like “The Walls of Jericho”, “The Wrath of Kane” and “A Man, Barely Alive” which honours Stone Cold Steve Austin) to mid-carders (“The Godlike Genius of Scotty Too Hotty”) to legends (“The Excellence of Execution” and “Real American”). Even the aforementioned Poffo gets the nod in “Wrestling with Rhyme”.

Unlike Poffo’s offerings, though, the poems in Parts Unknown aren’t intended to elicit a comical response. Rather, many of these poems are highly sophisticated in their imagery, language, and references. To truly understand the poem “The Goldberg Variations”, for example, requires knowledge of not only Goldberg the wrestler, but also the story behind the classical music piece of the same name. Of course, not all of the poems require Google to fully appreciate them; but it may help the reader gain further insight into some of the stories being told. In fact, Holmes prides himself on having written poems that specifically do cater to more knowledgeable wrestling fans.

This respect is evident in the way that Holmes can gain inspiration by nearly anything wrestling-related, and can use that inspiration to paint brilliant literary images through his words.

Scotty Too Hotty’s hat-adorned hairstyle, for example, is described by Holmes as “his head of McDonald’s fries”. The theme music for the tag team of Windham and Rotundo sparked “Real American”, in which readers are reminded that “the most beloved entrance theme of the me-decade wasn’t always the Hulkster’s.” Mr. Socko is similarly homaged in a clever poem (“For Cowboy Bob Orton”) where the only vowel used is the letter “o” … “Soon Socko stoops to no good, mocks LOD’s old school holds, cold-cocks Scotty Too Hotty; Snowplows poor Snow (oh, Molly Holly sobs)”.

Holmes, 37, also pays tribute to the unique language of the wrestling industry, first in the poem “What?” which is a compendium of catchphrases heard over the years, and then again in the list poem, “Finishing Moves”.”That one hammers home how innately poetic the wrestling industry is. A lot of people could never, in this lifetime, generate some of the names of finishing moves that are so inherently lyrical. Look at some of the names used in wrestling: Norman Conquest, Dragon Suplex, Perfect Plex, Superfly Smash, Atomic Arabian Facebuster, Pearl River Plunge. The words are very poetic.”

Notwithstanding that, Holmes realizes that the book may not be the easiest sell to non-wrestling fans, even those who are otherwise interested in poetry. But he’s not too worried about that.

“I think that the literary snobs aren’t necessarily going to get this book. It will probably be more appealing to wrestling fans than people who are more fans of traditional poetry. But I don’t really care too much about that. That’s not the reason I wrote the book; I wrote it because I write poetry about things I love.”

Holmes has penned other books on poetry, including james i wanted to ask you and Got No Flag at All. He has also written a novel entitled Watermelon Row.