Book has a ‘Chokehold’ on insiders

In the weeks since the release of Chokehold: Pro Wrestling’s Real Mayhem Outside the Ring, there has been a whirlwind of activity among wrestling insiders — e-mails flying through e-space; phone lines ringing and jangling; musty, yellowed clippings fingered time and again — all revisiting ancient wars in promotions that no longer exist. 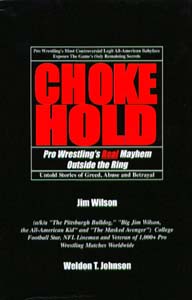 That so many people have devoted so much time to the reconstruction of trivial events from 30 years ago is understandable. Though the book, by ex-wrestler Jim Wilson and sociologist Weldon T. Johnson, largely focuses on a world whose time has passed, it might represent the most revelatory and notorious volume ever on pro wrestling.

As a result, historians and fans are busily crediting or discrediting the book as they raise the same question about Wilson and Johnson’s exposé that others have asked about their sport:

In 556 remarkable pages, Wilson traces his transition from a NFL lineman to wrestler, covers every step of the battle for control of the lucrative Georgia wrestling market in the 1970s, and argues for comprehensive wrestling reforms, including worker unionization. And his supporting ammunition is truly explosive. A few allegations:

Incendiary stuff, indeed, but assessing its accuracy is complicated by the fact that Chokehold has two entangled plot lines. One concerns Wilson’s misfortunes as a pro wrestler, while the other is a distillation of thousands of pages of unreported depositions, U.S. Justice Department memos, FBI reports, and court filings.

For many readers, one story inevitably colors the other, usually with ample swatches of grey. Most notably, Wilson has been persona non grata in pro wrestling for more than two decades, especially after his participation in an ABC 20/20 program in 1985 that exposed industry tricks such as “blading” at a time when much of pro wrestling maintained a veil of secrecy.

A star lineman at the University of Georgia, Wilson hooked up with Ray Gunkel’s Atlanta-based promotion in 1968, following in the footsteps of many NFL players who wrestled in the off-season. His name and athletic background made him a natural hero, and Wilson quotes Gunkel as saying, “If you go with the program, we’ll make you world champion.”

But the good guy wore out his welcome very soon. Early on, Wilson, accustomed to a higher level of employee care in the NFL, was appalled by the way promoters treated wrestlers, and gained a reputation as an annoying clubhouse lawyer. He also angered veterans by balking at losing matches or refusing to “blade” himself to open up a gusher of blood.

Most of all, he claims to have refused Barnett’s advances in 1973, reportedly telling him, “I don’t have to sell my body to get the strap [world title belt].” At that point, Wilson said he became little more than preliminary match fodder. For the balance of his career, he squeezed out a few bouts with independent promotions, ran unsuccessful competing cards in the NWA Georgia territory, picketed some establishment shows, and railed against the deceitful underbelly of pro wrestling.

Wilson’s account is almost numbing in places – he wrote that he awoke to find the family’s German shepherd bludgeoned the morning of an independent show he put together in Atlanta in 1974.

Still, whether a blacklist prevented him from an NWA championship run is far from certain. A mid-carder at best, Wilson was a comparative unknown outside of rings in the southern U.S. His face never adorned the major wrestling periodicals, a telltale sign of impending stardom, and he has been described as a dull (and disgruntled) worker. In a deposition cited in a footnote, Barnett testified that Wilson was asked to leave the Australian tour because of “his promiscuity with airline stewardesses.”

What he did have going for him was a tenacity and dogged litigiousness that far exceeded any of his contemporaries, and that is what sets Chokehold apart from other wrestling books. Wilson filed lawsuits against the NWA and its lead promoters in 1976 and again in 1979, alleging a myriad of antitrust violations, fraud, and other shady dealings.

Between the paperwork from those actions (Wilson said he eventually settled for less than $100,000) and a mountain of government reports and memos obtained under the Freedom of Information Act, Chokehold is a mother lode of information about the NWA from the 1950s to the 1970.

Despite the 1956 Justice Department decree, Wilson and Johnson clearly establish that the NWA continued to operate as a classic monopoly into the early 1980s by blacklisting wrestlers, boycotting competitors, and bribing arena managers and TV stations to maintain territorial strangleholds.

The case studies — based on sworn statements and legal filings — are almost endless. Wilson himself was a witness to the NWA’s orchestrated campaign to drive Ann Gunkel, Ray’s widow, out of the business after her husband’s death after a match in 1972. (She eventually reached an out-of-court settlement.)

On a broader scale, when TV impresario Eddie Einhorn and promoter Pedro Martinez created the International Wrestling Association in 1975 — the first true attempt at a national promotion — they were doomed to failure. The fledgling IWA offered contracts to all wrestlers, along with guaranteed minimum pay — an unheard-of benefit at the time.

Yet, the IWA quickly went under — Einhorn lost more than $500,000 — in part because he was locked out of major arenas. In Winston-Salem, N.C., the city signed a contract with NWA promoter Jim Crockett giving him an arena “protection clause” in return for financial help with the local hockey team. A disaffected Einhorn told Wilson that the pattern was repeated throughout the southern U.S.

Ironically, the NWA monopoly disintegrated under the weight of Vince McMahon’s nationalization in the 1980s. McMahon’s WWE now has greater control of wrestling than the NWA ever did, and Wilson is unsparing in his belief that wrestler unionization, minimum health and safety standards, and tenacious governmental oversight are more important now than ever.

In the end, Chokehold is more valuable in suggesting what to think about, rather than what to think. Farhat’s promotion and the IWA dried up for a variety of reasons, most historians believe. And skeptics see the Tommy Rich/Jim Barnett tale as an urban legend. Even the referee for the match has dismissed the conspiracy theory, noting that Rich had no idea he was going to win the title that night.

But it is worth pondering how the rat-a-tat switch of championship belts marked a break from the past and foreshadowed the off-handed way in which titles are handled today.

Chokehold is not for everyone. It is not an easy book to read — Wilson’s stridency rarely pauses to catch its breath — and it lacks the warmth of the autobiographies of Mick Foley or Bobby Heenan. Still, it is a necessity for anyone interested in the history of the NWA and the ugly side of wrestling.

But is it “real?” With the broken limbs, the sexual peccadilloes, the steroids, the overt racism, the backstabbing, the hearsay, the inflated self-importance, and the unprecedented level of documentation, there is only one conclusion: