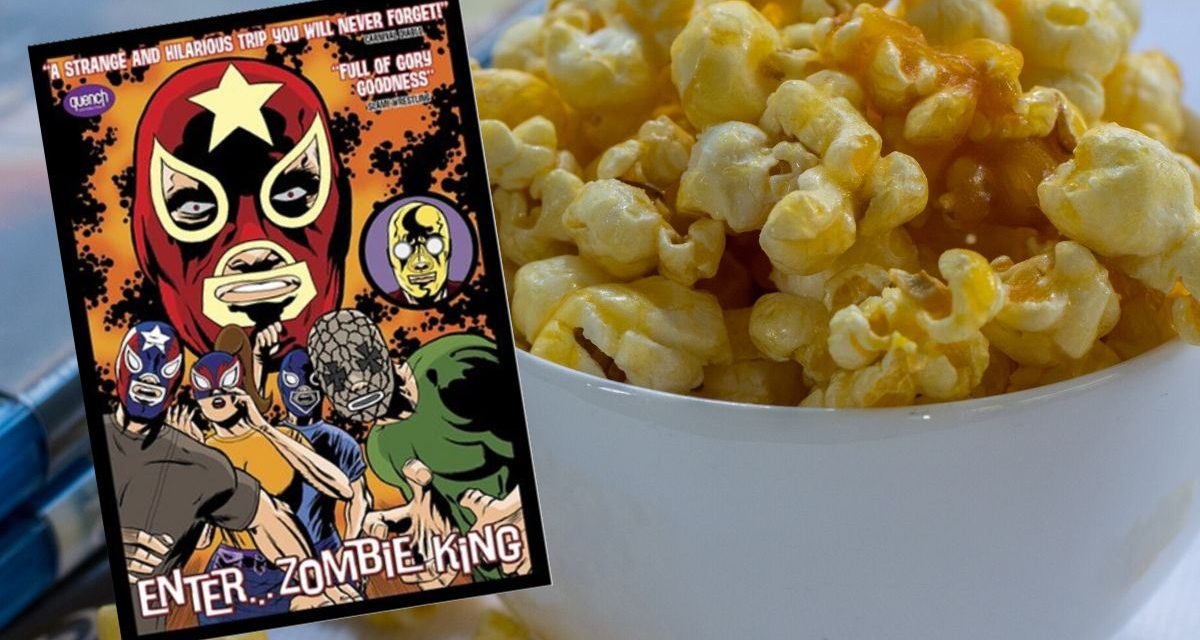 The independent film, Enter … Zombie King, is indeed a strange brew – the two producers have deep roots in comic books, the director is obsessed with Mexican masked wrestling, and the co-writer is a graduate of Naked News. Then throw in a bunch of pro wrestlers, including Jim ‘The Anvil’ Neidhart and NWA-TNA’s Sinn and Tracy, and one is guaranteed a strange ride.

Enter … Zombie King, which has its world premiere Friday, November 21st at the Bloor Cinema in Toronto, draws inspiration from George Romero films, 1960s Marvel Comics, and Mexican wrestling movies, and in the words of its press release, “smashes archetypes, emasculates genres and tells a story that warms the heart.” 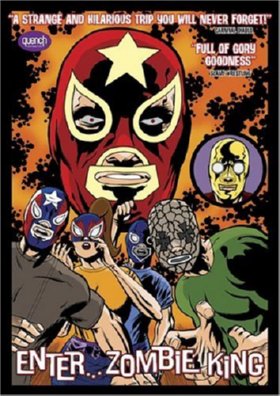 But the story of the film actually being made over a three-week period in December 2002 hinges completely on the Squared Circle Pro Wrestling Gym in Toronto’s west end, and its many students and graduates.

Bill Marks, one of the producers of the film, came up with the story of masked wrestlers versus zombies in the woods that are killing the townspeople. His background was in comics, as the founder of Vortex Comics (Mister X, Yummy Fur, Stig’s Inferno), and he brought in Steve Solomos, the founder and manager of The Beguiling Comix Shop in Toronto as co-producer.

But Marks only really knew one place to turn for lucha libre (masked Mexican) wrestling. “Since I knew I wanted to make a Mexican wrestling movie, I immediately called Stacey Case. I thought, ‘Who better to direct a Mexican wrestling movie in Canada than Stacey Case?'” said Marks. Case, a musician, silk-screener and artist, had directed a series of short films starring Arriba, The Parkdale Wrestler.

Case is not shy about his obsession with lucha libre, proudly recalling a line from the Toronto Sun‘s Kieran Grant in 2001: “[Case has a] love for Mexican wrestling that borders on the pathological.”

Toronto’s Michael Paszt, who had recently worked on a documentary on lucha libre and lives part-time in Mexico City, often writing articles on the Mexican wrestling scene, entered the scene next. He directed Marks and Case to the Squared Circle Pro Wrestling Gym, where Rob Etcheverria (aka wrestler El Fuego) trained students in the finer aspects of the lucha style, and who had been to Mexico to wrestle himself.

“Michael was instrumental in introducing us to Rob Fuego and saying, if you want to make a Mexican wrestling movie, here’s people doing lucha-style wrestling in Toronto. Which was just gold,” recalled Marks. “So through this odd connection of Stacey Case and Michael Paszt, we ended up wanting to make a Mexican wrestling movie, finding luchadores in Canada, and Stacey brought in Sean K. Robb, who I collaborated with on the screenplay. And, of course, Sean has a massive love of professional wrestling.”

Robb had worked with Case at the Naked News, where he wrote scripts and Case was a cameraman. Enter … Zombie King was his first feature screenplay, and it was a job he took to heart. To Robb, the film has aspects of comedy and horror, with multiple doses of B-movie campiness brought on by the low budget. “As much fun as the movie is, and as funny as it is, besides the fact that it plays with the conventions of all these different genres, it’s not in any way making fun or spoofing any of them, or satirizing them in any way. We just honestly enjoy the thing that inspired this weird little movie,” said Robb. “We were taking all of it very seriously. We love this stuff. And hopefully that shows up in the movie.”

Initially, the trainers at Squared Circle were asked to train some stuntmen in the basics of the lucha libre fighting style. Within a week. Needless to say, it didn’t work, so the producers decided to offer the wrestlers themselves work doing the stunts. It snowballed from there.

“When we saw what Rob and the Squared Circle guys could do, we basically started writing the movie around what they could do,” said Marks.

Wrestlers were paired up with actors roughly the same size and built as themselves. Because almost all of the characters were in lucha masks or under zombie make-up, the plan was to dub in the voices in the editing process. So, when a wrestler was subbing for the actor, they got the same opportunity to read the lines so the editor would know where to dub in the lines.

The original lead heel, the Zombie King, was supposed to be played by legendary horror director George Romero. But he fell ill, and hardly missing a beat, the decision was made to keep Sinn (Nick Cyjetkovich) as the bad guy, after impressing the crew with his inspired readings in the stunt scenes. El Fuego was called upon to be one of the lead heroes, Tiki, when the original actor was unable to make the shoot. Others, like Tracy Brooks and Angel Williams had their roles as zombies significantly upgraded to take advantage of both their stage presence and their enthusiasm for the roles.

“George got sick and couldn’t come, and Nick was so good, we just made him into the Zombie King,” said Marks. “The discovery that Nick was such a powerful, charismatic performer was just one of the great, happy accidents of the picture.”

Everyone involved in the behind-the-scenes process came away with a tremendous appreciation for the everyday skills of pro wrestlers. “[The wrestlers] were fantastic,” said Robb. “They had to work really long hours because most of the time, of course they were just sitting there waiting to do their bits. Half the time, they were better than the actors, frankly. I’m going to get into trouble for saying that, but the fact was that they could be called on to do just about anything, they were willing to do absolutely everything. They were always contributing new ideas, just little bits, just little gimmicks and jokes for their characters. The film is considerably better because of their involvement.”

Case had worked with a few of the wrestlers over the years, designing posters for the Apocalypse Wrestling Federation. He was thrilled and impressed by getting to work up close with them. “This was kind of neat to really work with them. There were so many times when those guys just saved the day. And they’re so professional. The whole wrestling community is totally awesome,” said Case. “They bent over backwards, they did everything you wanted. There were times, as the director, I was, like, ‘I don’t think you should be doing that.’ And the producers would go, ‘Don’t say that, man. Don’t say that.’ Because you don’t want them to hurt themselves. I loved those people.”

Jim “The Anvil” Neidhart was on set for just one day. “He steals every scene that he’s in,” said Case. “He does a Hulk Hogan imitation. ‘Jim, forget about being a sheriff. I’m going to re-write the script a little bit. I’m the f***ing director. Forget that you’re the sheriff. Now you’re Jim ‘The Anvil’ Neidhart as the sheriff. I need a couple of the Jim ‘The Anvil’ Neidharts in here.'”

Fuego worked as the stunt coordinator on the film, and Case and director of photography Adam Swica turned to him again and again for advice on the fight scenes. “It was totally fun coordinating fights with Fuego,” said Case. He’d explain what he needed, walk through the fight scene with Fuego, then sit back to watch. “They’d rehearse it a couple of times in the freezing cold winter with bare arms, down on the waterfront with the cold wind blowing in off Lake Ontario. The next thing you know, it’s ballet. It was just awesome, totally cool. I wouldn’t trade that experience for anything. All the other crap that I might have dealt with afterwards, in the year since, I can go right back to directing the film, and I was literally standing on the sidelines going ‘Yeah, Yeah! Harder! Harder! Hit ’em again!'”

According to Case, the film is not perfect — some of it by design. As a Canadian production, with a short shooting schedule and low budget, many of the shots planned in the original script had to be changed to work in reality. The production was rushed, and winter was coming quickly.

But, in partnership with Swica, Case got a slew of intentional continuity errors into Enter … Zombie King. “I drove the continuity girl nuts,” he said. “Because I know these [Mexican wrestling] films inside and out, I just started writing in continuity errors everywhere. She’s like, ‘Is his jacket supposed turn brown then back to blue?’ I’m like, ‘Yep’. Me and Adam, we got it completely. We started changing things around. A guy’s holding a cigarette in one shot. Cut back to him and he’s holding a cigar. Back and he’s holding a cigarette. It’s real quick, fast, fast, fast.”

In short, the film will hold-up on repeated viewings. “There’s just lots of stuff, even in the backgrounds,” said Case. “There’s one big fight scene, and there’s little tiny things, like when Rob punches the giant, fat wrestler in the stomach, the guy turns around. He turns around, and if you’re watching Rob, Rob just starts taking on the next zombie. But if you’re watching the fat guy when he turns around, he turns around, holds up both his arms, and clotheslines two zombies as he goes down. But if you’re not watching for it, you won’t see it. It’s actually fun. I like being in a crowd when people are watching because everybody laughs at different things because there’s so much going on.”

Enter … Zombie King doesn’t have a distribution deal yet, but all involved are hopeful that the screenings this weekend in Toronto will lead to a deal.