A normal path for a new book is a lot of sales in the first three months, and then things cool off. With Dan Murphy’s Bodyslams in Buffalo, however, things have been different. 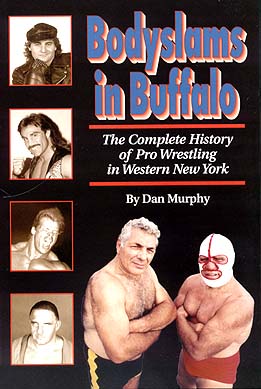 The book, a history of pro wrestling in Buffalo has been picking up steam sales-wise, said Murphy. “I’m selling more and more as each month goes on as the word-of-mouth gets out. It’s picked up a second life online. A few mentions on Kayfabe Memories, and a few other sites, and we’re getting orders from all across the U.S. In fact, I know that copies of the book have been given to The Missing Link and Johnny Powers, which is just an absolute delight.”

Murphy, 28, has been a freelance writer for Pro Wrestling Illustrated since 1997, and he found the connection invaluable for inspiration, research and photos.

“In my experiences with Pro Wrestling Illustrated, I’ve just gotten more and more interested in learning about the territorial system and how it developed into what we have today,” he said. “One of the things about Buffalo is that it’s not a territory that was very well known. There’s not a lot of record keeping of it. Just through word of mouth, and the people that I know from my hometown of Buffalo, wrestling’s been popular since the 1940s. So it made curious to see what the territory was like, how did this develop and who were some of the big stars who came up through the ranks. So I did some research, went into the PWI archive, and pulled together the basic history.”

Having already written the very successful The Erie Canal: The Ditch that Opened a Nation for Western New York Wares, Inc., Murphy had no trouble selling Bodyslams in Buffalo to the publisher.

“Brian Meyer, the publisher, called me and asked if I had any other ideas, if there was anything else that I’d like to work on,” Murphy said. “I pitched this idea, Bodyslams in Buffalo. It was kind of a risky move because wrestling is in the middle of a downturn, obviously, now. Wrestling tends to eat its own past. The fans of today aren’t familiar with the stars of 20 or 30 years ago for the most part. So I was going to try to write a history of a territory that wasn’t really that well-known, and make the appeal from people who were fans in the 1940s up until the fans of today. It was a sprawling-type project, but we wanted it to be concise and readable and entertaining. Brian loved the idea and we got it going.”

In the Publisher’s Ponderings at the front of Bodyslams in Buffalo, Meyer admits to taking a bit of a leap of faith. “Dan’s concept started to grow on me. Subsequent outlines and chapter summaries were enough to convince me that the idea had potential. Bodyslams in Buffalo is a unique and revealing look at Buffalo’s wrestling legacy.”

After graduating from Canisius College in 1996 with a bachelor’s degree in English and a minor in Irish Studies, Murphy was a reporter around western New York. He later went into public relations. He has just taken a job with his uncle, as director of sales for Lockport Locks and Erie Canal Cruises. “It’s kind of connected to the Erie Canal book. I’m going to be booking group tours, banquets at a facility in Lockport, right on the Erie Canal.”

Bodyslams in Buffalo is a real celebration of wrestling in the city. It talks about the early years of grappling in Buffalo, the NWF of the 1970s and the visits by the WWF, ECW and WCW over the years. As well, Murphy features the wrestlers who came out of Buffalo: Adrian Adonis, Lex Luger, Mark Lewin, Johnny Swinger, Mark Mero and Reno.

Central to the 112-page book are the best known grads of Buffalo: “The Destroyer” Dick Beyer and Ilio DiPaolo, who died in 1995 when he was struck by a car. DiPaolo’s family continues to run Ilio DiPaolo’s Restaurant and Ringside Lounge in his honour. According to Murphy, there wouldn’t have been a book without their co-operation. “In the very beginning, I decided I would only do this book if Dennis [DiPaolo, Ilio’s son] and The Destroyer approved of it. The Destroyer met me at [DiPaolo’s] restaurant wearing his mask. He sat down, ate lasagna, kept his mask on the whole time. It was great. He told me everything about the history of the territory, and told me where all the bodies were buried and everything.”

Ilio DiPaolo’s Restaurant and Ringside Lounge will be the site of a major event on Saturday, April 10, 2003 at 1 p.m. The Pro Wrestling Hall of Fame, from nearby Schenectady, NY, will be honouring The Destroyer and DiPaolo with special awards. Fans are invited down to the event to meet the Destroyer and meet author Murphy, who will be signing copies of his book. Murphy has heard that Diamond Dallas Page and Kimberly will be coming as well.

For information on ordering Bodyslams in Buffalo, see www.buffalobooks.com.