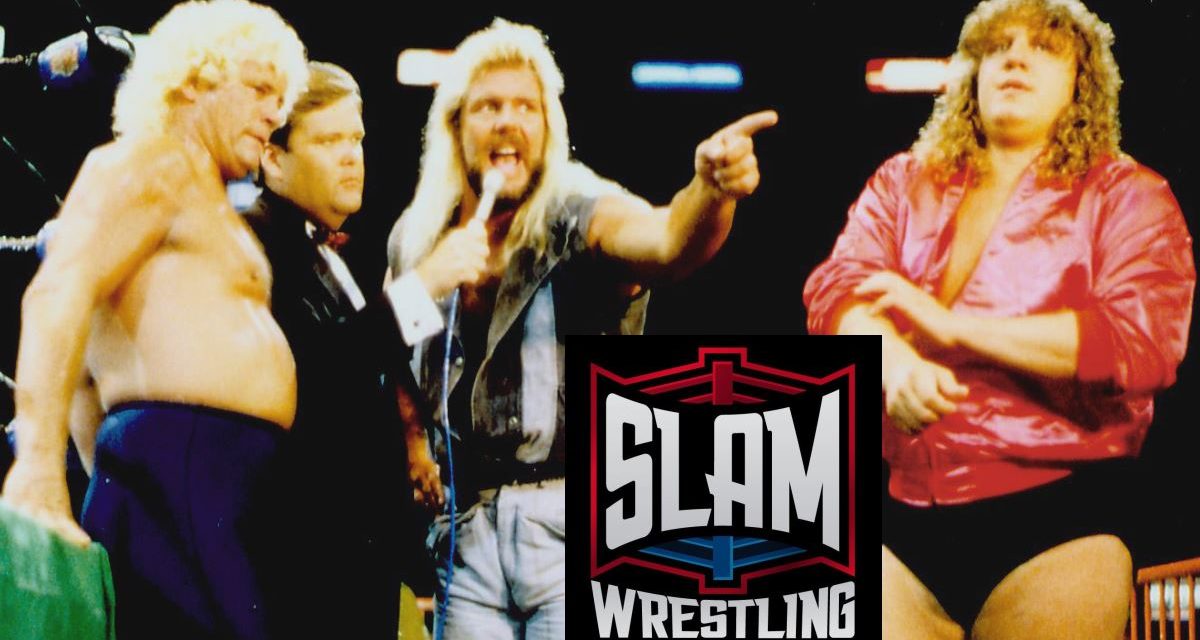 If a man can be judged by the love and affection he elicits from his friends, then it can truly be said that Terry ‘Bam Bam’ Gordy was one of a kind.

Gordy, a member of the famous Fabulous Freebirds trio of the late ’70s and ’80s, was found dead in his home Monday morning in Soddy Daisy, TN. Early medical reports indicated he died of blood clots to his heart. He was 40.

A former two-time Triple Crown Heavyweight champion who also formed the legendary Miracle-Violence Combination tag-team with Steve ‘Dr. Death’ Williams, Gordy was one of the greatest foreign wrestlers ever to compete in All Japan Pro Wrestling.

He was also one of the most adored.

Yesterday, friends and colleagues spoke lovingly of the man that many referred to simply as ‘Bam Bam’. 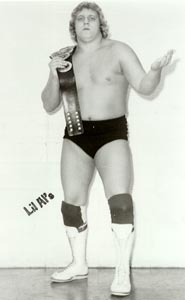 Current All Japan Pro Wrestling star Johnny Smith was shocked and saddened when informed of Gordy’s untimely death. Smith, a regular with All Japan since 1989, was a frequent opponent of Gordy and remembers the six-foot-four, 289-pounder as a ‘gentle giant’.

“What a performer in the ring. He was unbelievable,” Smith told SLAM! Wrestling. “I worked with him lots of times. He was an easy-going guy, especially outside the ring. In the ring, he could turn it on and get into his character and get the job done.”

Stan Hansen was a frequent tag team partner and opponent of Gordy’s in All Japan, exchanging the Triple Crown title with him twice over a six-week period in 1990.

Hansen, considered a god by the Japanese public and generally recognized as the greatest American wrestler ever to compete in Japan, recalls Gordy as one of the best wrestlers he ever worked with.

“He was a great talent. He started young and he was just a big, teddy bear type of kid. He had a tremendous amount of talent, developed a great sense of his own character… He was probably one of the better talents in pro wrestling. He had a natural ability and had his own unique style and character and that’s very difficult to develop. He was special.”

Hansen enjoyed working with him because Gordy’s physical style in the ring was so close to his own.

“He dished it out as well as taking it. He was a great opponent and a great partner. He was as good as they get… He’d fight for you in a New York second but he was the easiest going and nicest guy to get along with… He was a great guy. Just a really nice country boy that would give you the shirt off his back… I’ve got some good memories of Terry and I together. We were a successful tag team and also some really good matches when (Dan) Spivey and I were partnered up against Terry and Steve Williams. Those were some classic matches.”

Jimmy Garvin was a close friend of Gordy’s stemming from their days together in Fritz Von Erich’s World Class territory in the mid-’80s when Gordy was teamed with Michael ‘P.S.’ Hayes and Buddy Roberts in the original Fabulous Freebirds. Garvin would later go on to become a regular partner of Gordy’s in the NWA in 1989 along with Hayes in a revamped version of the Freebirds.

Garvin remembers Gordy as a natural athlete that picked up wrestling almost effortlessly.

“He was great. He was very talented, very intense. He had been wrestling since he was 16 as a pro and he certainly almost seemed to be a natural. He was always there when you needed him, his timing was perfect, he was tough, his endurance was good, he’d give 100% every time.”

Having travelled with him for so long and forging a close relationship with him, Garvin considered Gordy a close, dear friend.

“He was a great guy, he had a big heart. He was a great athlete and he was fun to travel with on the road, in Texas in 1984 when I travelled with him there. We all ran together. (The Freebirds and I) were a pretty tight group and we had a good time together. He was a lot of fun to be with.”

Promoter Bill Watts first put together the Freebirds trio of Gordy, Hayes and Roberts in the old Mid-South territory and remembered being awestruck the first time he saw Gordy, then 19 years old.

“I’d never seen a kid that had that much natural ability and that was that size, and had never really been a formal athlete. He’d never been a guy that worked the weights heavy or anything else. This was just God’s gift to him.”

“He was one of the special kids that I just feel so privileged for the short, brief time that he was in my life, because he was an exciting guy,” continued Watts. “I enjoyed him in the ring, I enjoyed him out of the ring, I enjoyed being the promoter. I also was still in my career in those days, so I got to work in the ring with him, and boy, I want to tell you, he was the kind of the guy that was just a natural in there. It was just a pleasure to be in there.”

Watts recalled disagreeing with Buck Robley, his booker at the time, over whether or not the Freebirds would become stars.

“Buck just didn’t see their talent. He was going to trade them to Florida for a couple of guys who were good, but I just saw this unbelievable talent. So we finally got Buddy Roberts, who was one that I brought down when I first bought in to this area as a promoter. I brought him down from Minneapolis with me. We got Buddy and we created the Hollywood Blonds. And (they) became the Freebirds. They just became phenomenal. It was a perfect chemistry.”

As world champion of Bill Watts’ Universal Wrestling Federation in 1986, Gordy had a long feud with the One Man Gang, real name George Gray, later forfeiting the title to him following an auto accident.

Gray remembers those matches with Gordy in the UWF as physical encounters.

“All the matches, I thought, were pretty good. They were all pretty rough and tough type matches because that was both of our styles anyways… To me, he was a great worker. I had no complaints at all with him. I enjoyed it very much. He was professional all the way … in the ring.”

Current WWF personality Paul Bearer managed Gordy and Hayes in the late ’70s when he was then known as Percy Pringle and considered Gordy a friend.

“He was poetry in motion. In my estimation, without a doubt ‘Bam-Bam’ was the best big man ever to step into the squared circle,” Bearer wrote in a special message appearing yesterday on WWF.com. “He was the one of the finest human beings to walk across this green earth. I am proud to be able to call him my friend.”

In the early ’90s, Terry Gordy was on top of the world. He was one half of the greatest tag team in the world with Steve ‘Dr. Death’ Williams, making $10-15 000 a week for All Japan Wrestling and was considered by many to be the future of professional wrestling.

And then the bottom fell out.

Gordy burned the candle at both ends, living life outside of the ring just as intensely as he did inside. He drank heavily and partied hard, abusing an assortment of drugs during his career.

In 1993, as he was flying into Japan for the start of another All Japan tour, Gordy overdosed on the plane and was rushed to the hospital where he lay in a coma for five days.

Although he returned to wrestling, he was a shell of his former great self. Close friends described him as ‘slow’ and ‘out of it’.

He was never the same again.

“One of my proudest feats was working with [Terry ‘Bam Bam’] Gordy [in ECW],” WWF star Raven told SLAM! Wrestling contributor Chris Gramlich this past December. “Gordy had that drug overdose in Japan, his brain just wasn’t the same and it was his first match back in the States in a long time.”

“Everybody knew that he did drugs. Cocaine or he did whatever else was there,” revealed Garvin. “He wasn’t as crisp. He wasn’t as clear in talking to him. He would wander a little bit or you would be talking to him and maybe you’d feel he wasn’t exactly listening or in the conversation with you 100%. He got a little slow and I think the incident that happened in Japan did have some damage.”

Garvin thinks Gordy turned to drugs because he was dealing with a lot of personal demons.

“Terry was a big guy and he had a tough reputation and sometimes that can overwhelm a person to the degree that they lose themselves in the character and they find they can’t really express themselves because its not in the character.”

“(I think he thought he) had to hold in a lot of stuff, to the point he had to be Terry Gordy the wrestler and not Terry Gordy the man,” explained Garvin. “I think a lot of wrestlers, because of the character and the role playing that they do, that they find themselves in the character when they don’t need to be. I think sometimes maybe that’s what Terry was going through.”

The general consensus among friends and critics is that the overdose in 1993 stopped Gordy’s wrestling career dead in its tracks and that had he been able to fight his addiction, Gordy could have went on to become one of the best heavyweights in the history of wrestling.

“Terry Gordy, physically and psychology-wise, was pretty unique in this business,” opined Stan Hansen. “If he hadn’t lost his health he could have been one of the greatest ever. The thing that hits me is that so many of my partners, be it Giant Baba, Bruiser Brody, Gary Albright and now Terry Gordy, they’ve all passed on… I always thought Terry was one person that could really have taken over and establish he was the guy.”

“He was an awesome worker. Just a natural from the first time I saw him. He would have been one of the all-time greats for sure,” offered Dave Meltzer, editor of the Wrestling Observer Newsletter. “As far as I’m concerned his career was over (after the overdose). He came back but it was the ghost of Terry Gordy.”

Gordy’s addiction didn’t change the fact that he was man who lived life to the fullest and was loved by many.