Pricey WrestleMania book not worth it 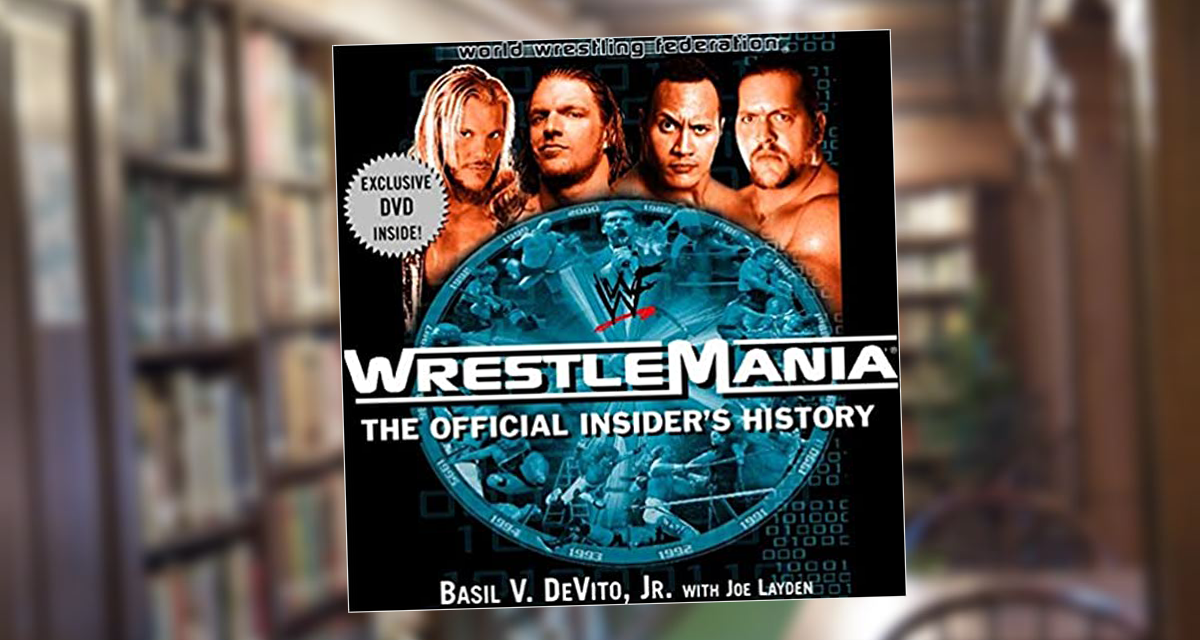 At first glance WrestleMania: The Official Insider’s Story looks impressive. Its colour photographs, graphics and listings are positively eye-catching. It sure is an attractive tome. Nevertheless, when one sits down and actually reads the content written by Basil V. Devito Jr. (XFL President and longtime WWF employee) and Joe Layden (The Rock Says…), we soon realize that the inflated book is all style and no substance.

With a title like The Official Insider’s Story we assume that we’ll get the scoop on all the behind-the-scenes happenings that surrounded each and every WrestleMania. That doesn’t happen. A better title for the book would’ve been Basil V. Devito’s Official Story. Serving as the WWF’s head marketer for many years Devito recounts his personal endeavors to promote the WrestleMania events.

He details his closed-door meetings with interested partners and companies: The site problems the WWF encountered with several of the venues (eg. How they outfitted the Pontiac Silverdome with viewing screens.) The publicity stunts he masterminded such as the gag weigh-in session for Mr. T and Roddy Piper prior to WrestleMania 2.

All of this is very interesting if you are planning a career in marketing or publicity but for the hardcore wrestling fan, Devito’s fond recollections are for the most part neither interesting nor compelling. Devito’s approach is way off base. WrestleMania: The Official Insider’s Story would’ve been fascinating if it was told from a booker’s point of view or someone who was privy to the reason why crucial decisions were made. We don’t care what type of attractions were available at the Trump Plaza Hotel and Casino, the site of WrestleManias 4 and 5. We want to know how Hulk Hogan and Andre The Giant were persuaded to let themselves be eliminated from the WWF World Title tournament or how Randy Savage reacted to the story line involving his wife Elizabeth and Hogan.

Speaking of Hogan, a large portion of the book is concerned with Devito describing how Hogan changed from the loyal “company man” to a distant loner the longer he remained in the WWF. As he tells it, Hogan was an agreeable personality to work with for a time then as his attention was diverted to projects outside the wrestling ring and as his relationship with McMahon soured (possibly over the ’80s WWF steroid scandal which isn’t alluded to) until Hogan was routinely shrugging off his obligations to the company. To illustrate his point Devito describes a special company party held to commemorate Vince McMahon’s contributions to the industry. Wrestlers such as Piper and Savage prepared long and involved speeches praising and roasting McMahon. When it was Hogan’s time to say a little something he brushed away the mic and sat silent shocking everyone in attendance.

Piper throwing some real punches at Mr. T during their WrestleMania 2 boxing match, the fact that the WWF imposed a pay-per-view blackout across Michigan to make sure the Pontiac Silverdome was filled for WrestleMania 3, Hogan becoming involved in a jet-ski accident the day before WrestleMania IX and a WWF Magazine hitting the newsstands declaring Savage the champ before WrestleMania IV was held are the only real eye-opening pieces of information found in the book’s 190-plus pages. Even with the inclusion of a special DVD video inside (containing WrestleMania highlights fans have either seen before or have in their collection already), the $74.00 Canadian ($49.00 in America) price-tag isn’t justified. It’s far too much for far too little. A book chronicling the history of WrestleMania is a great idea. Having a publicist-marketer write it from their point of view, is not.