Steven Richards discusses the politics of Right To Censor

Steven Richards, deep in the middle of a political movement of his own, wants to remind fans of the World Wrestling Federation to get out and vote in the U.S. presidential election today.

“You’d better get off your ass and actually vote for one guy or the other, no matter how much they both suck,” he told SLAM! Wrestling before the WWF show at Toronto’s Air Canada Centre on October 28. 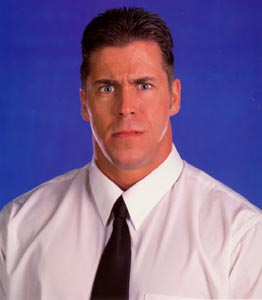 He has had an interesting perspective from which to watch the whole initial WWF participation in politics this past summer. Having taken the company public, Vince and Linda McMahon got their stars involved in both the Republican and Democratic conventions, and challenged the main candidates, George W. Bush and Al Gore, to appear on Smackdown! in a debate to be moderated by Minnesota governor Jesse Ventura.

At the same time, Richards’ life changed in the summer when the Right To Censor was born, and he was thrust into the spotlight to clean up the WWF, while at the same time poking fun at the various political groups that had protested the vulgar, sexual nature of some of the WWF programming. The L. Brent Bozell III-led Parents Television Council, an ultraconservative group that helped convince some advertisers to pull their ads from the WWF, was a prime target.

“It always makes me mad that anytime anyone looks at wrestling, despite the fact that it’s the highest-rated cable show, we always get the highest buys in the pay-per-views … anytime you hear anyone talk about wrestling … they laugh, they roll their eyes, they make jokes. Nobody ever really takes wrestling seriously,” Richards complained.

The 29-year-old Richards has certainly made fans take him seriously, perhaps for the first time in his career. Gone are the parody gimmicks, the knock-offs, the comedy. And he couldn’t be happier.

“This is a great opportunity. I don’t think that a lot of people knew that this would get this big — when it started out as just Steven Richards, before there even was a Right To Censor, that it would have this many people or this big of a reaction from the fans. I tried my best. They gave me the opportunity and I’m running with it. So is everybody else in Right To Censor.”

He has nothing but praise for the four other members of Right To Censor, and believes that each one brings something different to the RTC.

Over the course of the angle’s run, Richards claimed to never have asked for a wrestler to join RTC, never having lobbied for anyone in particular.

In fact, he didn’t lobby for the role himself. It came out of nowhere.

“It was so sudden how it happened,” Richards began. “[It’s] 4:30 in Worcester, Massachusetts, I thought I was working Metal.

“They came to me and they told me, ‘Do you want to cut your hair?’ I was kind of shocked. I was scared because I had my hair, it’s an ego thing. But I said I’d cut my hair because every time I took a big chance, it’d paid off. Thank God it paid off this time. This is the biggest payoff of anything in my career since the BWO. And I’m making a lot more money this time!” (He admits to missing his long hair, however.)

The BWO was, of course, the Blue World Order, and Richards’ main claim to fame. That was during his ECW days, and he was Big Stevie Cool, and the BWO was a parody of WCW’s New World Order. ECW couldn’t keep the blue BWO t-shirts in stock.

Richards was born Michael Manna and grew up poor in Philadelphia. He worshiped wrestling and fought his way into the sport after finishing high school in the early ’90s. He became a mainstay of ECW, from the early days of the promotion in 1992, until mid-1997, when he was briefly in WCW. After that didn’t pan out, he did some work for ECW, and the indies until the WWF called.

Things aren’t all that different for Richards now, and that’s partly why WWF fans don’t see him in the ring getting beaten up as much as they’d like to see. “I would love to wrestle more, but I’m hurt right now. I tore my PCL about a month and a half ago. I’m having a lot of problems with my shins. My knee’s healing, but if you’ve ever had shin splints, mine are far beyond shin splints. I have to get checked out. It can’t be a fracture because I’d know. There’s something going on down there and every time I get a bump on it, it hurts a lot.”

But like many wrestlers, Richards is reluctant to take time off in the middle of a big push. His time many never come again. “Look at all the talent we have. Look at how easily I could lose my spot, how easily I could lose my job. I don’t think Vince McMahon would do that — he’s stuck by me through my injuries since I’ve been here. But I wouldn’t blame him. Here’s a guy who’s hurt all the time, taking time off. That’s why I did not want to take time off. This is the opportunity of a lifetime. This is going to set me and my family up for life. I’m going to make sure I make it good. You may never get an opportunity like this again.”

With the recent addition of Ivory to the ranks of RTC, and the apparent slow conversion of Eddie Guerrero as well, the group is in danger of becoming like the New World Order or the Corporate Ministry — too big for their own good.

“There’s a certain hex or jinx or curse that goes with having too big a group. You start to get lost. People within the group, let alone within the company, start to get lost in the shuffle. I would love right now to have a lot of people, but it would be hard to say in our instance that everyone’s unique. And in our group, everybody is unique. The only thing I feel bad about right at this point is that someone like Bull doesn’t have the opportunity to talk,” he said. “If anybody should be speaking the least, I think it should be me.”

Steven Richards wants off the microphone? “I love speaking, but the point I’m trying to make is that if you hear Goodfather, if you hear Val, if you hear Ivory and if you hear Bull, they’re just saying whatever I said before. So I’m talking through them. All that I’ve got to do, the commentators just have to say, ‘he sounds just like Steven Richards. Steven Richards told him to say that. He’s brainwashed him.'”