A November Julio Dinero will remember

This weekend’s ECW pay-per-view, November To Remember, promises to be one that Julio Dinero will never forget. After all, it will be his first PPV appearance for the company in a wrestling capacity.

Dinero has been on PPVs before, most notably last year’s forgettable Heroes of Wrestling card (as Julio Fantastico), as well as previous ECW cards running interference, but this will be the first time he gets to let his stuff shine for a hardcore audience out in cableland.

“I’m looking forward to it,” Dinero told SLAM! Wrestling with more than a hint of excitement. “But there’s six of us though, so I don’t know how much stuff I’m going to get to show. There’s only so much time for each person to showcase their stuff, but I sure will try to make the most of my three minutes in the ring.” 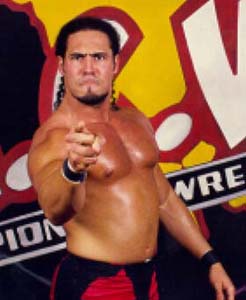 His three minutes in the ring will come in the form of a six-man tag match-up pitting him and his ECW stable of Hot Commodity — EZ Money, Julio Dinero and Simon Diamond — against three big fan favourites in ECW, Roadkill, Danny Doring and Kid Kash.

“It’s a straight six-man tag team match. I think Spike Dudley is involved somehow. I don’t know if he’s going to be a ref, or at ringside, or whatever. He’s involved because we’ve had a few issues with him since the last pay-per-view. He’s somewhere in the mix. He knocked out Chris Hammerick from the pay-per-view. He hit him with an Acid Drop on a chair, so Chris is out of the pay-per-view, so I hope he’s there so we can get some revenge on him.”

When you have a team consisting of Dinero, Money and Diamond, wouldn’t it make more sense of Kid Kash was on the heels side?

“We’ve been trying to get him in, but he just doesn’t like us for some reason,” laughed Dinero. “We like Kid Kash; Who wouldn’t want a guy who could do all that stuff, but he just seems to want to be on his own path. He’s been successful so I can’t blame him. But we’re hoping to cause him some un-success, so maybe then he’ll decide to join us if he can’t beat us.”

As for the rest of the card, Dinero promised that the fans will get their money’s worth. The card is seemingly solidified, with headline match-ups including the FBI vs. Mikey Whipwreck and Tajiri for the tag-team straps, and New Jack vs. Rhino for the TV title. But it’s the interesting and unusual main event that Dinero is most looking forward to. ECW champ Jerry Lynn, along with Sandman, Justin Credible and Steve Corino all vie for the gold, in a different set of circumstances.

“It’s not a four way dance. The main event is Steve Corino, Sandman, Jerry Lynn and Justin Credible. It?s called double jeopardy, one-on-one, two different matches going on at the same time, and the winner of each match wrestles, and the winner of that is the ECW champion.”

His pick to come out on top? “That’s tough. I will pick Jerry Lynn. He’ll have the stamina of the four. He’s in the best shape out of the four, so I figure he’ll be able to go the longest. Sandman might be the favourite, but I think Jerry Lynn will probably keep it.”

While the card is intriguing, it has to be a tougher sell because ECW no longer has a cable television program to promote its product. Dinero thinks that it may not be as tough as some people would think.

“I don’t believe necessarily that our buyrates will go down, if anything they might go up. People know when the pay-per-views are, if they follow it, and this might be some people’s only chance to watch us. Our PPVs are usually our best shows. If you’re going to spend $20 a month, I think you get a better deal. As far as what I think, it’s unfortunate. All the publicity you can get is good, but I don’t think it will hurt us too badly. And if our buyrates are good I’m sure we’ll be on another network fairly soon, because there is obviously a market for what we do.”