NASHVILLE — Colorado Mike Rapada is the forgotten world champion. But he’s going to do his damnedest to change that, to make both his name and his NWA World title recognized.

Rapada won the National Wrestling Alliance title in September in an eight-man tournament, defeating Hector Guerrero and then Jerry Flynn in the final. In mid-October, he successfully defended the title against hot prospect Chris Harris at the NWA’s Battle of the Belts in Nashville, and three days later, survived a bruising match against Sabu in Tampa. 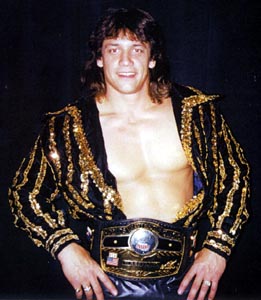 Mike Rapada with the NWA title.

In Nashville, Rapada took some time to talk to SLAM! Wrestling about his career, dreams, and hopes for the NWA World belt. And he’s quick to defend the NWA title against anyone who is out to slag the gold recognized by a collection of promoters since 1948, and which dates back even further.

“The NWA World title means just as much as it ever has, it just hasn’t been out there for the people to see it as much,” Rapada said. “This belt here, people can actually get to and touch, and have a Polaroid taken with the world champion. Of course in the WWF and WCW, there’s no chance that even a fan is probably going to touch or even see a belt like that.”

(Canadian fans in the NWA-affiliated CWF and ECCW promotions be forewarned: The flag on the NWA title for Canada is for some reason the Ontario flag rather than the Maple Leaf.)

He plans to go wherever he can to defend the title, saying that travelling and seeing the world is a goal for him as much as making money. “Wherever they send me, I’m going to go,” he said.

The story of the 6-foot-3, 231-pound ‘Colorado Kid’ Mike Rapada started out in Colorado Springs, following a divorce. Down and out, he was living with an aunt and uncle, washing windows and doing carpentry. He entered a few Toughman competitions and shortly thereafter left for Nashville to pursue a career in wrestling. It took three months, but eventually he convinced Jeff Jarrett to train him for a while. But Jarrett left for the WWF (the first time) and Rapada sought out help from the likes of Kenny Wayne, Buddy Wayne and others.

In 1994, he was named Rookie of the Year in the old USWA promotion out of Memphis. He also had a reign as North American champ out of Jonesboro, Arkansas, beating Cactus Jack, and as USWA World champ, beating Jerry ‘The King’ Lawler.

Until winning the NWA World title, he had been NWA North American champion, the top belt recognized by the NWA Worldwide promotion based out of Nashville.

Rapada looks pretty average outside the ring, and except for the big wrestling hair, he could pass for a jock of any sort. Definitely an ‘average Joe’, Rapada is soft-spoken and friendly, never giving off an air of superiority or cockiness.

But when he steps in the ring, there is a transformation. Rapada reeks of ‘good guy’ like Kerry von Erich always did, and previous attempts to turn him heel were foolish and short-lived. The Colorado Kid is built physically solid, and is a bit like Tito Santana or Tom Zenk in looks.

What is his style in the ring? “Traditional, but I’ll walk with anybody,” Rapada said. “I’ll do high flying, any kind of style that you can imagine.”

“My style will interchange with anybody else’s style. It doesn’t matter if you’re seven-foot tall, if you weigh 100 pounds or if you weigh 600 pounds, it doesn’t matter, I can wrestle you. Where some guys [with their] high flying tactics, they can only wrestle high flyers to have a good match. Me, I’ve got it covered from top to bottom. I’m not a speed demon, I’m not a big, muscled-up weightlifter guy. But I’m in good enough shape, I’ve got enough there, I’m fast enough and I’m strong enough to do the job.”

Growing up, he admired wrestlers like the von Erichs, Lawler, Hulk Hogan and Randy ‘Macho Man’ Savage. “The only reason I say the Macho Man — he’s a heel and I’m a babyface, let’s get that in the right words, he’s a bad guy and I’m a good guy,” he laughed. “But he was a wrestler. When he was a bad guy wrestler, his wrestling tactics were still scientific, a lot of them.”

The NWA title tournament in September was a result of the previous champion, former Olympian judoka Naoga Ogawa, forfeiting the title because he was too injured to defend it. Rapada doesn’t think that the belt lost any standing because Ogawa, a big name in Japan, gave it up without a fight. “He didn’t give it up, give it up. He was wanting to wrestle for it,” Rapada said. “Just because he gave it up doesn’t make him any less of a champion, it doesn’t bring any clouds over the belt because it’s still a top-notch belt.”

Politics obviously played a part in Ogawa relinquishing the title. The collection of promoters that make up the NWA wanted the title to be defended in their territories, which range from British Columbia to Winnipeg, and through the mid, and eastern United States, plus Puerto Rico, the United Kingdom and New Zealand.

Was Rapada aware that he was in for the ultimate push in the NWA before the show in Tampa? He claimed ignorance. “I didn’t know anything about it, to tell you the truth. I didn’t have a clue until I got down there.”

Some fans may know Rapada from the R & B Security gimmick recently in WCW. The offer from WCW came about at the right time for Rapada, and he said that the door is still open for him to return one day.

“WCW opened the door for me to give a little time where I didn’t have to wrestle and beat myself up. When I entered the [NWA World title] tournament, I wanted to be in the best shape that I could be in. They gave me a few matches to knock the ring-rust off me and keep me out there going. As far as being down there wrestling for them, I enjoyed it. They had me all over the world. I don’t think that anybody out there wouldn’t have went. Made good money doing it, hanging out with my friends, and at the same time got a chance to take a little vacation and get ready for the tournament.”

Money is definitely the toughest part of being a wrestler, according to Rapada, who has been doing nothing but wrestling for eight years. “I look at it as a rich man’s hobby. If you don’t have money before you get into the wrestling business, don’t expect a whole lot after you get in. There are a lot of wrestlers that just work for a real low rate and just try to get on TV and stuff. It’s hard to pay the bills when you’re not getting paid.”

Rapada knows that he has an uphill climb in front of him to make the NWA World title meaningful again, and is ready for the challenge.