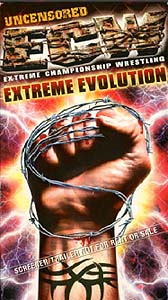 Pioneer Entertainment’s first ECW Wrestling home video to hit the home video market is a disappointment on all fronts. If you eliminate the first two matches, which if you are already an ECW fan you’ve seen before on pay-per-view, you are left with three bouts that hardly justify the $19.98 price tag ($14.98 for the censored version) for the ECW Extreme Evolution tape.

Knowing the wealth of archival material ECW has to draw from such as the classic barbed wire match pitting Terry Funk against Sabu or the thrilling, five-star battles between Rob Van Dam and Sabu, you have to wonder why the five matches were selected when better material exists.

Pioneer Entertainment’s production value (the animated barbed wire is truly wicked) is positively light years ahead of the competition. ECW wrestling has never looked so good or been packaged so well on video. Certainly the producers desired to showcase ECW’s current roster and those who have moved on to high-profile positions in other companies to indicate ECW’s influence on the wrestling business. But to offer a handful of matches when other video companies (R.F. Video, for example) are selling four or more hours of ECW material for the same price is aggravating to the die-hard fan who was craving for something more substantial.

The selling point of Extreme Revolution is the much sought after Sandman – Raven barbed wire match from 1996. It is bloody. It is brutal. It symbolizes everything that fashioned ECW into the cutting edge federation that the Big Two inevitably mimicked. The Eliminators – Gordy, Williams match is also quite the exemplary tag team struggle. Perry Saturn’s flying elbow smash off a scaffold above the ring is cause for replay after replay as is Francine falling out of her dress during a Tommy Dreamer piledriver in the finale of the mixed tag match.

To the newbie, the tape is an enlightening introduction to the federation that does hardcore wrestling better than anyone else. Veteran fans though will be displeased with the meager and repetitive content. In November, ECW: Path Of Destruction, the second video in the series will be released. Here’s hoping the second time will be the charm.