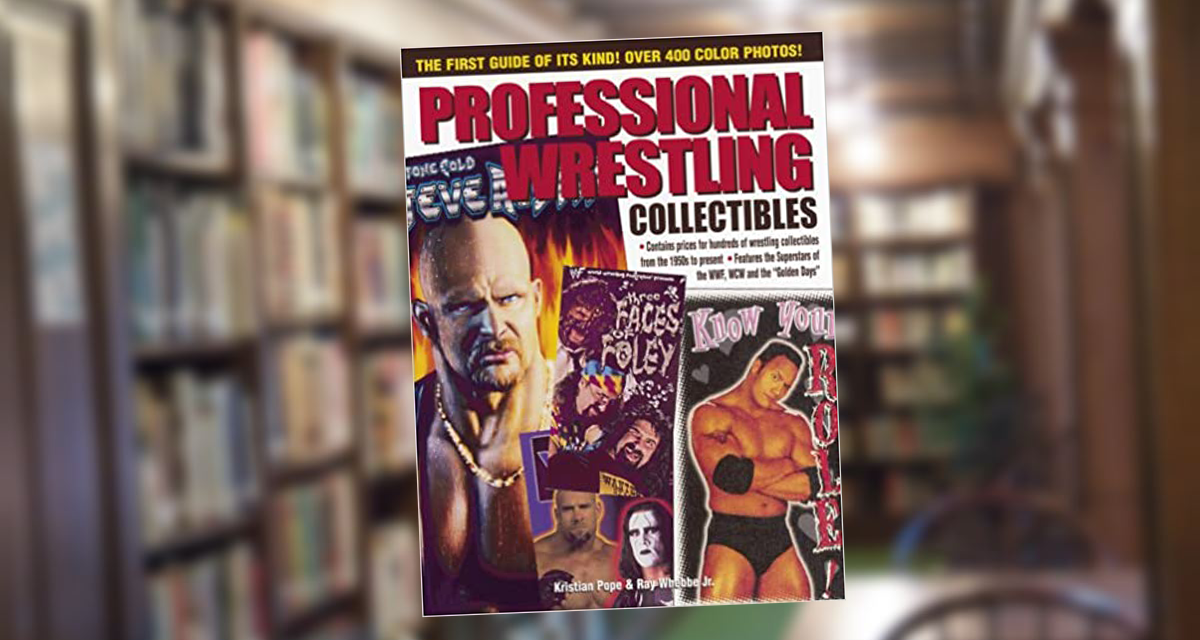 By TERRY HARRIS – For Slam Wrestling

From a collector’s point of view, the new book Professional Wrestling Collectibles should be considered a valuable resource. However for a hard-core collector, I think it will be more of a novelty item and essentially become a wrestling collectible itself.

The book, written by Kristian Pope and Ray Webbe Jr. and published by Krause Publications, is broken down into different segments on wrestling collectibles. The first segment deals with unique and oddball collectibles such as an autographed pair of Tommy “Wildfire” Rich’s wrestling boots. The unique aspect about these boots are that he wore them in 1981 when he defeated Harley Race to capture his first and only NWA World Title. It goes on to list many other unique wrestling collectibles such as Terry Funk’s branding iron, Jimmy Snuka’s ring attire and on and on. A very interesting and well-researched chapter.

The book then takes a lapse with what is really not much more than filler content – which wrestler you should consider collecting memorabilia of and why you should collect that particular superstar. It lists the who’s who of pro wrestling, but really, is this needed? If you are a collector, chances are you already know about the wrestlers. It lists deceased stars such as Andre the Giant, Bruiser Brody being more of a premium. I think you should collect whoever you like and not worry so much about the value of certain items. Perhaps there is a local indy wrestler in your area and you feel he has a lot of upside. I am an avid collector, but I also like to go with hunches and sometimes purchasing unknown quantities of unknown wrestlers can make your collecting more affordable and offer you more enjoyment seeing the guys develop right before your eyes over the years.

There is also a half-assed attempt to list some of the videos that are currently at your local video store. It gives you the names again of several stars you should look for when you are looking for videos. Again this is a good list of wrestlers to look for, but it is subject to what your taste is. They also give a plug for some very reputable video tape resellers that you can order tapes from at a very reasonable price (warning: U.S. dollars). One of the tendencies again is for the book to go out tell you what wrestlers you should be looking for, that is seemingly the whole theme of the book to keep repeating what you should be looking for. They also give you a good breakdown on what makes certain tapes so entertaining, whether it be specific territories (Mid South to Japan) or powerful interviews, heel turns and their own personal favourites of the past and present. It will definitely jog your memory in many respects.

The section on wrestling figures (aka dolls) is very well researched and will surprise a lot of people with their collections of how much they are worth. The only thing it fails to mention is that the prices are assuming the figurine is still in the original package and is mint condition. The book will also become dated very quickly as the prices change on these figures almost monthly, but at the very least it will give you an education on pricing and lets you know the amount of figurines that are out there. The AWA was the first to have wrestling figures in the U.S. although Remco, the manufacturer, had all of the wrestlers with the same body so the only way to differentiate between the figures was by their heads, or in Ric Flair’s case, by his robe.

And how could you have a collectibles book without wrestling cards? Aside from the occasional issue of Canadian Sportscard Collector, it is hard to get a sense of the pricing on your cards. The book lists from Allen & Ginters cigarette cards to modern high gloss WWF and WCW cards. It then breaks down the pricing even further by listing various food issues, knick-knacks and comic books. One of the most interesting collectibles was a Whipper Billy Watson soda bottle that booked at $175.00!

How many wrestling fans knew there was a wrestling museum? And in of all places Newton, Iowa? The museum has almost 8,000 square feet of wrestling history. Some of the more interesting pieces were Lou Thesz’s world heavyweight title and Strangler Lewis’s famous headlock machine.

Every wrestling fan has some programs, magazines or wrestling books and probably have no idea of what their actual value is. Professional Wrestling Collectibles should give you a pretty good idea of what some of your collectibles are worth. You will receive an in depth look at the history of the publications. They specifically focus on Norm Kietzer as he provided many of the programs for the AWA, NWA, WWF and the Mid South as they are prominently illustrated in the book. Looking through the pictures of all the old wrestling programs, magazines and books is a great trip down memory lane. I cannot say enough about the wrestling signs listing shows from Madison Square Garden to the Des Moines Veterans Auditorium.

If you ever thought that you had seen a wrestler in a movie but weren’t sure, this book will put your mind to rest. The authors have gone so far as to list all of the masked Mexican wrestlers who appeared on the silver screen. Also listed is the roots of Rock ‘n Wrestling from the Freebirds all the way up top today’s rock and wrestling themes. Again there are lots of pictures showing some of the unique records produced.

The biggest collectible today in wrestling, I think, is the autographs as they are not so mainstream as hockey and baseball, plus wrestlers are very receptive to autographs. (Yes even the heels.) This is a very well detailed and laid out section. I was amazed at how affordable some of the autographs actually are to purchase. Again, it is the who’s who of wrestling – from Abdullah the Butcher to The Zebra Kid.

A staple of any wrestling fan’s diet is the internet and this will give you more sites to check out than you can imagine. From the wrestlers’ own sites to the actual promotions’ own sites you will find them all.

The book finishes up listing all of the former or current hotbeds of wrestling, this could have been a book in itself and I felt this was really just an afterthought by the authors. Listings from the AWA to the Mid Atlantic this will give wrestling fans a bigger appreciation of wrestling.

All and all I thought the book was very well done. I think in some cases they could have done without things and in other cases they could have detailed a little better (i.e. territories). I think this is a must have for all wrestling fans and it will no doubt educate and enlighten even the most core enthusiasts alike. Well done guys!

Some mini errors through out the book:
Lugar is spelled Luger
Mattel is spelled Martel
David Kegney was the Wildman, not the Wolfman, and it’s spelled McKigney
Hasbro wrestling dolls had moving body parts.

TERRY HARRIS is a resident of Toronto who collects wrestling figurines, programs, magazines, tapes, pictures, autographs and is most proud of meeting Ric Flair and having the opportunity to speak with him. His favourite collectible is the old Strangehold programs that Frank Tunney had for his Maple Leaf Gardens shows and having most of them autographed by the wrestlers on Wood Street or better yet having rubbed the magazines on the old ramp to get the wrestlers’ actual blood. Keep in mind he was only a kid back then!