This Sunday at WCW Mayhem, Vampiro will make his Canadian pro wrestling debut. Kind of strange for a lad from Thunder Bay who has been wrestling for a dozen years, eh? 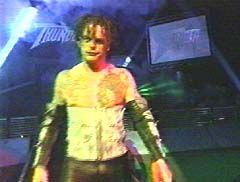 “I’ve wrestled a total of zero times in Canada,” explained Vampiro from his home in Thunder Bay, Ontario, four days before the pay-per-view. “I don’t even know if any Canadian fans know who I am, but I hope they do.”

Though he has never wrestled in Toronto, he is no stranger to Canada’s largest city.

“If I get a hold of a mic on Sunday, I’ll definitely let them know that I was a doorman at The Horseshoe, I worked at the Big Bop, I was a roadie for Teenage Head, Jack DeKyzer, and I spent my time throwing up on Queen Street,” he laughed. “I lived in Toronto for a long time.”

In particular, Vampiro, whose real name is Ian Hodgkisson, is looking forward to wrestling in the home of the Toronto Maple Leafs, the Air Canada Centre.

WCW in their constant changes in direction, seldom announces Vampiro as being from Thunder Bay, so the former junior hockey player isn’t sure if Canadians realize who he is.

“This is really a big thing for me this weekend in Canada,” he said. “I hope people watch, and I hope that people realize that I am Canadian. I’m really looking forward to rocking the house.”

It could be a weird scene during his match with Berlyn. In the American arenas, fans have been known to chant ‘U.S.A., U.S.A.’ to get under the German’s skin.

But Vampiro is looking past the match. “To tell you the honest truth, I think this is the climax of this angle. I definitely think that when this is over, I’ll be moving on. Evidently moving up, so I’ve been told. They’re trying to groom me to work against the big names.”

He doesn’t think a chain match is a way to showcase his skills, but does confess that it will be an “interesting” match. “I’m guaranteeing blood,” he vowed. “I’ll definitely show my skills as a babyface.”