Amanda Storm has nothing nice to say about Precious Lucy.

Storm, a woman who regularly wrestles men on the indy circuit and trained with Killer Kowalski, will be facing Lucy in a women’s match at the International Wrestling 2000 show August 9th in Montreal. Lucy has been a fan favourite at the first two IW2000 shows this year, and is sure to have the crowd’s support behind her against antagonist Amanda Storm. 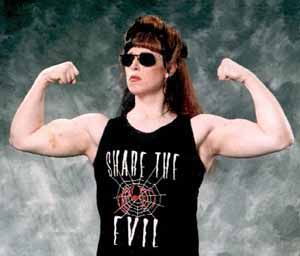 “I don’t really think about her too much,” Storm admits, “except that she is a cute little wrestler.”

When they worked at the same show in Maine but in separate matches, Storm was sure to note Lucy’s strengths and weaknesses, “of which the latter far outnumber the former,” she claims.

“To be honest, I don’t really consider [her] much of a challenge or a threat. Quite frankly, she is too small and weak to hurt me unless she brings an electrified baseball bat to the ring with her, and the last time I checked, we were’t having a hardcore match. I’m feeling pretty confident.”

When further probed, Storm reluctantly admits that there is bad blood between her and Lucy, but claims it’s mostly on Lucy’s part. “We were sitting in the locker room one day,” she said, “when I said to her, ‘What’s up with your Canadians anyway? I mean, come on – you frogs are really nothing more than American wannabe’s on the budget plan.’ I was going to wax eloquent about how Canadian money looks like something that Parker Brothers puts out, but she sort of snapped and had to be restrained by all thiry-seven of the valets who were in attendance that evening.”

Storm thought the whole thing was funny and water under the bridge, nothing more, but apparently she’s still holding a grudge. “Quite the masochist,” Storm calls her for actually wanting to wrestle in a match with her. “My style is really no secret. Like Killer Kowalski, I like to pick out a bodypart and work it – usually the legs on the bigger guys and arms on the women. Throw in a few bodyslams, powerbombs and maybe a snapmare off the top rope or two, along with a generous helping of extracurricular activities and you have the perfect recipe for a victory served Amanda Storm style!”

It’s unlikely Precious Lucy agrees entirely with Storm, so it should be quite the fight when they finally step into the ring together at the Centre Pierre Charbonneau on August 9th.

Amanda Storm is actually Alexandra Whitney, and is from California. She trained with Kowalski at his school in Boston, Massachusetts. She follows a long line of greats to graduate from the school, including HHH, Chyna and Saturn.

Storm admits it was difficult to find a good, reputable school that would train women. Finding the man who trained Chyna was both a blessing and a sound idea, and with Kowalski’s credentials and experience, it made for the ideal choice. She started her training in 1998 and even though she’s now out on her own, she still returns to sharpen her skills. “Kowalski’s motto is ‘Once a student always a student,'” Storm says, “so I can go for as long as I want, even if I am fortunate enough to make it to the big time someday.” Apparently, many current stars take advantage of opportunities to return and continue their training here.

Storm, though, may still have quite a ways before she gets there. “I got my start in the Sacramento Valley Wrestling Alliance,” she says, “where I quickly became their women’s champion.” From there, she bounced around out west for about a year and then moved to the Northeast, where she’s just now starting to garner attention from promoters.

She has also worked with Kowalski’s Wrestling Allstars, the Trans World Wrestling Alliance in Philadelphia, and she’s in talks with Yankee Pro Wrestling, and apparently a number of promotions down south have shown interest in her services. As well, she has teamed up with “Mr. USA” Tony Atlas to form Allstar Wrestling. They will be promoting shows in the central and southern Maine area, with their first shows being on August 20th and 21st.

So far, Storm seems to have yet to find her niche. “I have to admit that I lose more matches than I win but my loses invariably come due to factors outside of the match and *never* because my opponent is actually tougher or more skilled than myself. My wrestling career to date has been a long road of corrupt referees, cheating opponents and freak accidents. And even when I do lose to a pin, I consider it a victory when when opponent leaves the ring all bloody and bruised and with many months to look forward to taking her or his meals through a straw, while I am unscathed because I lost to some cute trick or a quick roll up.”

Her biggest triumphs to date, however, have been outside the ring. An article about Storm will be appearing in an issue of Penthouse magazine sometime in 2000, unfortunately unaccompanied by pictures, and MTV came to her house and interviewed her for ninety minutes for part of a piece about wrestling. The producer tells her it will be running sometime in August, so keep an eye out.

Of her in-ring pursuits, though, she does remember one night above others, and for good reason. “There was this one match where I was scheduled to fight a guy who was about my size,” she says. “He must have spent two hours before the match complaining to everyone in the house that he ‘had to wrestle a woman’ and how it would kill his ‘male credibility.'”

“Finally,” she continues, “he made the mistake of saying this male credibility thing in earshot of me. So I walked up to him all sweet as pie and said, ‘I understand completely and you are absolutely right. I mean we both know that if we just go in there you’ll cream me in six seconds because I’m only a woman (yeah, right!), and then you’ll look like a bully. So make like you don’t see me and let me hit you with a chair first. I’m not very strong so it won’t hurt and then that’ll give you a good reason to knock me out. Please don’t hit me too hard though or I might cry. Ok?'”

“Well, the idiot bought it hook, line and sinker, and let me hit him over the back with the chair. But I put everything I had into it, which is quite a lot, and laid him out on the mat colder than yesterday’s leftover pizza. Then I threw him over the top rope and proceeded to beat the living daylights out of him with anything that came to hand. The timekeeper’s bell, a piece of the crowd barrier, the steel steps. You name it, I hit him with it. I lost the match by disqualification of course, but it was great fun and I’ll bet the fans remembered our names when they went home that night!”

On the subject of today’s wrestling, Amanda Storm is more of a student than a fan. She sometimes watches Raw or Nitro, she admits, but she does so with a notebook in hand, studying what seems to work and what doesn’t. What is it about The Rock that makes him so over with the fans when his finishing move is a glorified elbow drop?, she muses. How can Steve Austin be a face when everything about him screams heel?

As a budding promoter herself, her opinion on the use of women in wrestling as a source of T&A rather than entertaining wrestling, is “if that’s what they want, let them have it.” Her personal preference as a wrestler is to see women portrayed in matches much like the man, where the action is the focus. Women “don’t have to have their butts hanging out in leather shorts,” she adds. She insists that women in wrestling gear, working in the ring, will not only be noticed for their talent, but also their bodies. “We can see that they have legs without having it crammed down our throat,” she says. “Too much of a good thing, sometimes, can be tacky.”