Edge explains The Brood’s break from The Ministry

The Brood and The Ministry have gone their separate ways. 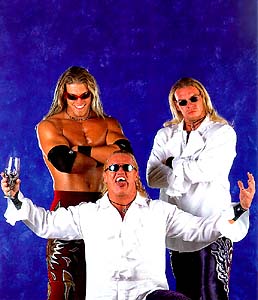 The split on Monday Night Raw happened probably faster than anyone expected. Even for the wrestlers themselves.

“We’ll probably be together until the year 2000 with the whole apocalypse thing,” Edge told SLAM! Wrestling prior to Wrestlemania. “But everything’s always up in the air when it comes to the WWF.”

The break from the Ministry probably marks the beginning of a big push for The Brood. The WWF has a lot of money tied into making The Brood into big stars.

Edge’s “brother” Christian said that there will soon be Brood neck chains and t-shirts available to fans.

The Brood joining The Ministry seemed a natural fit back when it initially happened. Edge and Gangrel both excelled at bizarre, pained facial expressions. But the members were aware that they could be lost behind the star power and size of the Undertaker.

Edge viewed the union in a positive light.

“If anything we’ve been on TV more because of [joining],” Edge said then. “The Brood is doing their own thing. Now we’re also doing the Ministry thing. So that means we’re double-barrelled.” (Well, not anymore.)

But Edge still saw where the drawbacks would have been.

“The only problem is being swallowed up with so many guys.”

That concern is gone now that The Brood have been exiled. What they still must be concerned with is how long this trio will remain together.

Edge would not explain why he was feuding with Gangrel when he first joined the WWF.

Both Edge and Christian see a bright future for The Brood.

Edge recently received his first title shot when he and Gangrel faced the team of Owen Hart and Jeff Jarrett for the tag titles just prior to Wrestlemania.

Christian has already worn some gold when he was the light heavyweight champion. But he hopes that people will not see him as just a lightweight.

“I want to be able to compete with anybody because I can,” Christian said.

From here, The Brood have many opportunities in front of them. Revenge against The Ministry will probably be a bloodbath.