There’s no question that Jason has been making a Sensation in the WWF.

Since debuting on RAW dressed up as Owen Hart, Jason Sensation’s skills doing impressions have been praised.

But who is the person behind the massive, fake Owen Hart nose?

Why, a polite Canadian of course!

Slam Wrestling caught up with Jason Sensation at the recent WWF SkyDome press conference in Toronto. He was in town promoting Saturday night’s show, and taped an edition of TSN’s Off The Record.

The 20-year-old Sensation was born Jason Tavares in Mississauga, grew up in Newmarket and now lives in Toronto.

He was inspired to start doing impressions by Canadian Andre Philipe Gagnon, specifically Gagnon’s one-man version of We Are The World.

“I guess it was a God-given gift,” said Sensation. “I’ve got to thank the good Lord for that.”

“That came from bugging Carl De Marco a lot,” he said. “Being persistent. Sending in videos, showing up a lot. Finally he said, let’s give this guy a shot.”

From his home in Newmarket, he made regular journeys down to Toronto (about an hour’s drive) to Maple Leaf Gardens for wrestling. His favorite wrestlers? “Ric Flair, Bret Hart. Tough to say between the two.” 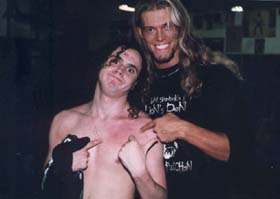 Recently attacked during an edition of RAW by Owen Hart, Sensation was put into the dreaded Sharp Shooter. He said that “sucked” and swears he will “never” step into the ring against Hart.

He has a huge range of impressions, and this reporter witnessed him doing Val Venis, Hollywood Hogan, Shawn Michaels, Owen Hart, Undertaker, Steve Austin and even Chyna.

“I do everybody as best as I can,” he said, admitting that he believes a time will come when he will want to be know for something more than his impressions.

After his performance introducing the semi-main event at Saturday’s SkyDome show, WWF ring announcer Howard Finkel should fear for his job. Sensation received a huge ovation from the crowd and proceeded to entertain them by previewing the main event (Kane vs Austin vs Undertaker) in the voices of the participants. Then, in his Owen Hart voice, he introduced the Ken Shamrock vs Owen Hart match.

Sensation offered the following advice for anyone trying to break into the wrestling game, but the message translates into almost anything.

He’s not sure what’s up next for him, and he isn’t on any sort of a contract with the WWF.