Mat Matters: NWA has All Access to fans and the future in 2022 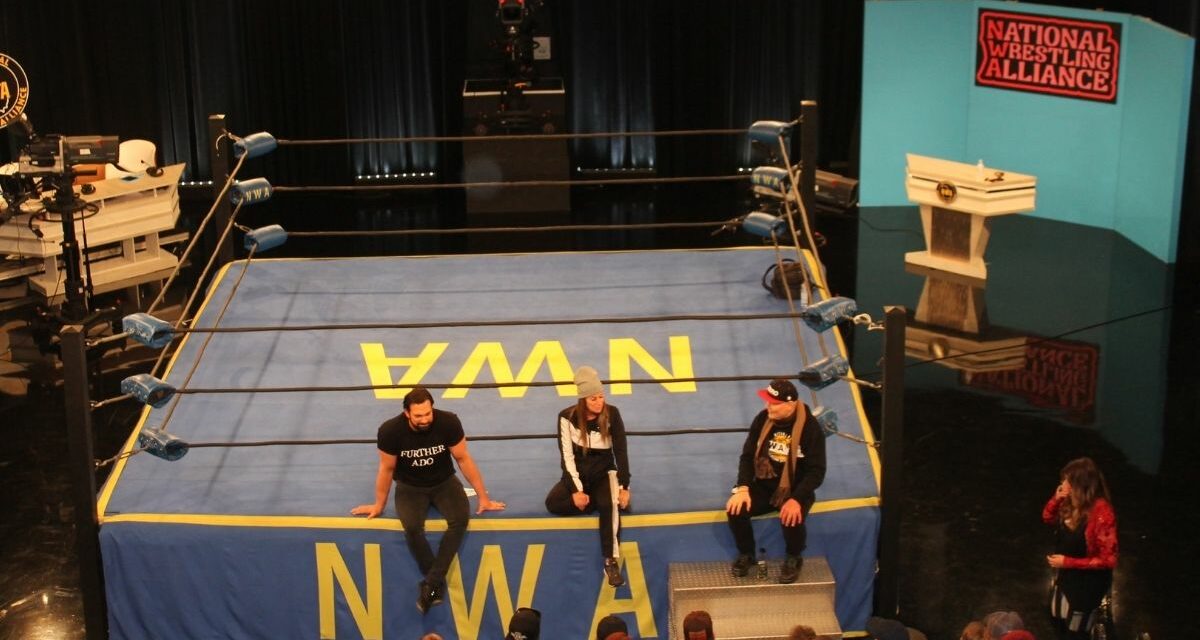 What is old becomes new again. That’s the feeling I get when I think of the National Wrestling Alliance in the modern era. But yet, I’m old enough to remember a time when the NWA was on its last legs. The image of “The Franchise” Shane Douglas is still fresh in my mind, when he tossed the Ten Pounds of Gold down to elevate in its place Extreme Championship Wrestling. It almost felt like that it was the final nail in the coffin for the NWA as we know it.

Sure, there were attempts to bring back the NWA to its prominence and heyday, but overall, there was something lacking. For myself, I’ve been pondering that a bit, and it wasn’t until my interview with Aron Stevens for NWA 73 that I started to see not only what was lacking, but also view the promotion in a new light. This was one of the quotes that he shared during our interview that I couldn’t find a place for originally in the article, but it seems so perfect for this moment. He said:

I equate NWA, and I said this the first set of [TV] tapings [to] what ECW was in the mid-’90s, because all ECW was… was an alternative, right? It was the people that never really fit in anywhere else, or the people that were wanting to kind of revitalize their careers. It was… it was a pirate ship. It was kind of this hodgepodge of great talent that, you know, like, ‘Oh, wait a minute! What’re these guys doing?’

And it was when you watched it, it wasn’t like RAW or it wasn’t like [WCW Monday Night] Nitro; it was its own thing. What we’re doing is: we are the alternative, but at the same time we are all extremely proud of the tradition that goes along with those three letters.

That, right there, sums up what the NWA means in the modern era. While it hearkens to the past, there is talent and staff that presents the NWA with a fresh outlook, down-to-earth characters fans can get invested in, and… yes, Virginia, there is professional wrestling galore!

Now, with news of the NWA and FITE.tv adding a new streaming service of NWA All Access at $49.99 (all prices US dollars), that includes the NWA Powerrr shows and pay-per-views.  Also, with the NWA USA shows free on YouTube, as well as the Powerrr shows showing afterwards on Friday nights where it all started, this is a great time for any wrestling to tune in to the NWA product to see another alternative.

Now that we got the fanboy-ing and fangirl-ing out of the way, what does the future hold for the company going forward? That would require someone with an MBA to really suss that out.

Might as well flex that degree a bit, and use the S.W.O.T. model to map the potential out. For those of you not in the know, S.W.O.T. stands for: Strengths, Weaknesses, Opportunities, and Threats. This is what any business worth their salt utilize to show what’s working, what ain’t working, how to fix it, and what problems lay ahead.

Make no mistake, folks, professional wrestling is a business, so let’s jump to the first part of the S.W.O.T. model, and that is the…

Since NWA Owner Billy Corgan acquired the product in 2017 through the parent company, Lightning One, Inc., the focus was on emphasizing the “history, tradition, and legacy.” In order to do that, Corgan used the NWA Heavyweight belt and instituted the Ten Pounds of Gold series, with “The National Treasure” Nick Aldis as the standard bearer. With challengers aplenty in Tim Storm and Cody Rhodes, that pulled fans in to see importance and the legacy of the belt that ran on YouTube. 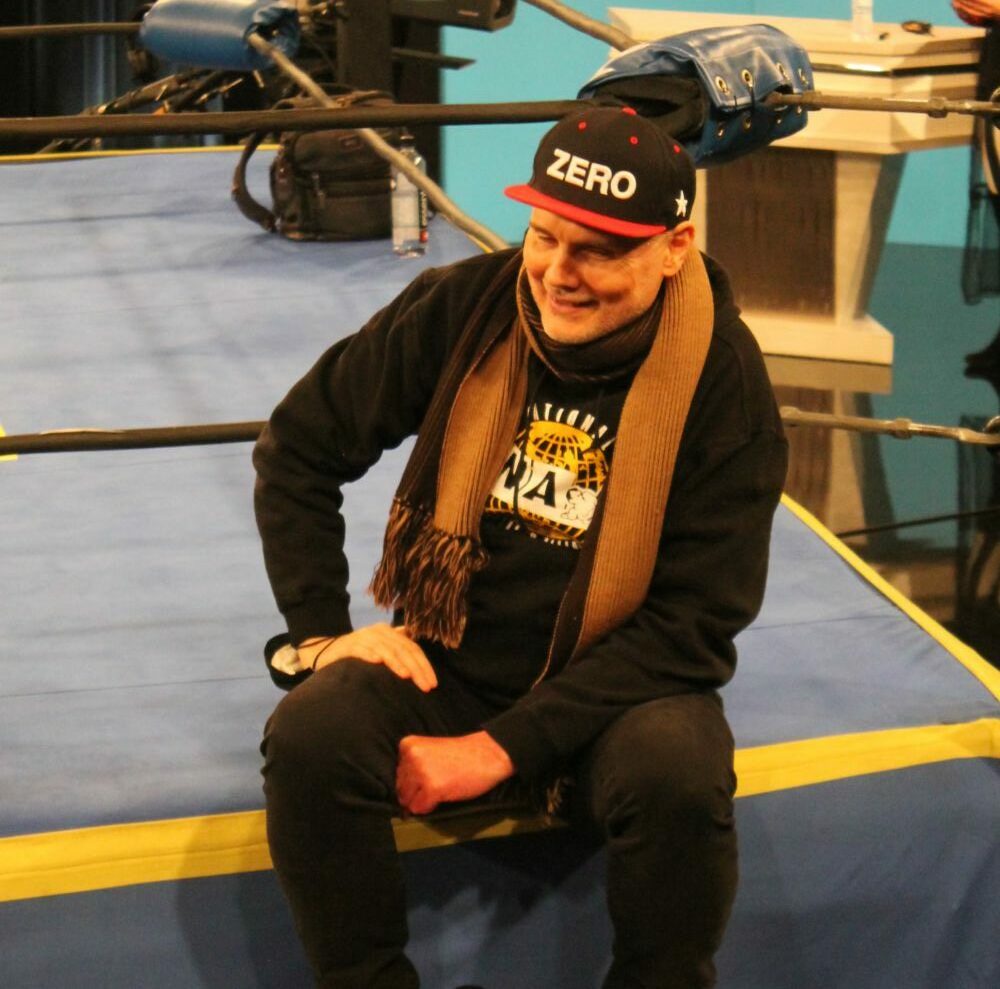 Billy Corgan in December 2021 at the NWA tapings in Atlanta. Photo by Greg Oliver

That, in turn, turned to the series, NWA Powerrr, that focused on a smaller TV studio show like the kind you would see in clips from Georgia Championship Wrestling, and the like. Also, the shows are just one hour.  I love wrestling, but really, who wants a bloated three-hour promotion that doesn’t deliver wrestling?

Sorry, it must be my allergies kicking in.

The other nice thing is that it is now a smaller promotion, and has the ability to do those smaller crowds at tapings, and get the product produced in a timely manner. Plus, initial reports from other website state that the NWA is exceeding FITE’s expectations.  Which leads to the NWA’s…

Quick aside: if you feel like this where I’m going to go off on the talent, then look to troll on a sub-Reddit or Twitter, because that is not the purpose here.

Now, it can be argued that the title picture around the NWA National championship is lacking of late, or there’s too many titles in the division (e.g. the Television title, Tag Titles, etc.) and not enough talent, but that is an easy fix, which we’ll talk about later.

No, the biggest weakness that I can see to the NWA product is a lack of a national TV program. YouTube and FITE are good for the moment, and streaming services are the wave of the future. But, if the NWA wishes to attract more fans to the product, some sort of television deal will need to be addressed.

Now, it doesn’t have to be a WWE/AEW arrangement like NBC Universal or TNT, respectively, but it can be a difference maker. On the NWA’s YouTube channel, it gets approximately 25,000 views. Compare that to IMPACT! Wrestling, where on the AXS! Television channel, its viewership ranges from 90-150K. Again, not in the same ballpark of WWE and AEW, whose viewership is in the millions, but it is a difference maker.

Of course, that is one of many…

While the deal with FITE does put them in a good position, the question is always what value can the NWA product offer a fan? Well, it depends on how you market it. For me, I subscribe to NWA at the current $4.99/month price, and then factor in the pay-per-views every couple of months, which are around $14.99. With the NWA adding a total of six pay-per-views, then your monthly bill if you kept going at that rate is somewhere around $180 for the entire year.

Now, the NWA can use that as a case to justify the $49.99 price tag, because that would save the average fan almost $130. Also, if the NWA can grant fans access to old footage of wrestling matches from yesteryear, like WWE has with its video library, that can tie in with the “history, tradition, and legacy” for newer fans coming to the product, or fans who want to remember the glory days of Terry Funk, Harley Race, et al.

Get your NWA merch! Photo by Greg Oliver

Another opportunity is to keep the “forbidden doors” open, with companies like IMPACT and AEW. Having talent come in and be given another chance at showcasing their skills in another promotion can only help to add intrigue and keep fans interested in what will take place next.

Also, with the added NWA USA show, there is a great time to showcase talent that haven’t had many chances at the spotlight, and to show off new talent like Darius Lockhart. The NWA Junior Heavyweight tournament, and an emphasis on the NWA National title, currently held by Chris Adonis, needs to be brought up more often and it provide a perfect place to be spotlighted on the new show.

Finally, we come to the most important part of the S.W.O.T. model, the…

There are really three threats I see on the horizon for the NWA. The first being, since it is a smaller company, it is not in a position to compete with an organization like AEW, with access to resources such as television, and talent have more opportunities to cash a bigger paycheck. It’s the nature of the business, and it is to be expected.

The other is Game Changer Wrestling. While GCW has its own niche fanbase, it is also on the FITE app, and the NWA is one click away from losing a potential fan, not to mention it is competing with other fight-based promotions, and FITE has been a great equalizer, opening the door to many promotions you have never heard of.

The other threat that can be detrimental is another pandemic. I bring this up because, as of this writing, the Omicron variation of COVID has come to the United States, and has started to affect life as we know it. It’s even come to affect sporting events and players alike… again.

It wasn’t that long ago that the NWA, along with other promotions like Ring of Honor and Major League Wrestling had to halt production in an effort to keep talent safe.  During those early days of COVID, NWA talent like Eddie Kingston, Ricky Starks, to name a few, went over to AEW to keep up their momentum and pay their bills. Thankfully, the NWA was able to stay relevant with the Prime Time Live shows on FITE and then it returned in force in March of 2021 at the Back for the Attack PPV.  Since then, the NWA is back on pace to where its production was before the pandemic hit.

But what about the next time? I bring it up because ROH is currently on hold with its production, and its talent has moved on to other promotions, and the future of ROH looks uncertain. It’s worth noting that ROH was considered to be the spiritual successor to ECW, which went out of business and was absorbed by WWE. ROH was in the same position as the NWA is now, where it had the buzz and the partnership with Sinclair Broadcasting. Bottom line, none of that mattered at the end of the fiscal year.

Overall, the future does look bright for the NWA, and it is definitely riding the momentum. As long as it remains agile and continues to grow its fan base and its viewing opportunities with YouTube and FITE.TV, the NWA’s access to the future looks very good.