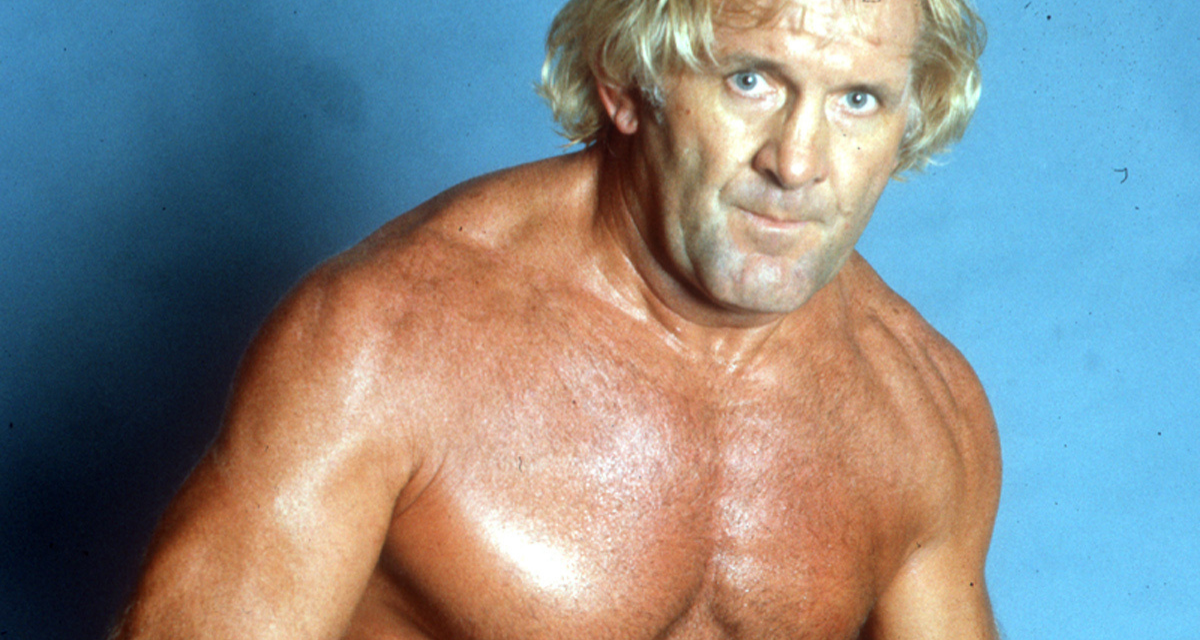 The news of Reggie Parks’ passing on the morning of October 7, 2021, in Tucson, Arizona, made more noise than Reggie ever did. To those who ever met him, you know what is meant — “Quiet Superman” Parks just might have been the softest-spoken, most modest superstar in professional wrestling history.

And he was a star twice over, as a wrestler and then, out of necessity, he ended up making championship title belts. (We’ll tackle beltmaking in a separate story!)

According to the Rico Mann run Facebook page, Reggie Parks – The King of Belts, “Reggie passed peacefully this morning in Tucson, AZ after a short but valiant battle with COVID-19.” He was 87.

Born Reginald David Parko in August 27, 1934 in Edmonton, Alberta, Parks grew up on the outskirts of town.

“I lived on a farm until I was 14 years old. I played a little hockey when I was a kid,” Parks recalled in 2013. There were 17 kids in his school one year, comprised of grades one to seven.

There was a homemade rink near the one-room classroom, and Parks played in net. “I was a goalie with a scoop shovel,” he chuckled, noting that the scar on his nose wasn’t from wrestling but from playing hockey. “When we moved into the city, for some reason, I just never got into hockey.”

Though he didn’t play much hockey in Edmonton, he did compete in many sports, and began weightlifting at age 13.

“I started at a boxing and wrestling club in Edmonton, then Stu Hart took me under his wing. He more or less was the guy that got me going, got me out on the road,” Parks explained.

Parks was a wrestling fan, which was how he came to Stu Hart’s attention.

“I used to go to the matches in Edmonton. I was an usher at the matches there. I was 14 years old, 15 years old. … George and Sandy [Scott], I remember when they came up there for the first time. Al ‘Tiny’ Mills … George and Sandy, they were one of the best babyface teams that were around. … It was quite impressive to watch them guys,” said Parks. “I used to hang around the dressing room and all that. Stu Hart would be there. Some of the old guys would say, ‘Stu, why don’t you give the kid a chance? Send him somewhere so he can go and wrestle.’ So he did. He sent me out to Seattle the first time I ever left the country.” (Records show that it was June 1956, but he had worked in Vancouver prior to crossing the border.)

Parks liked to downplay his accomplishments — and there were plenty.

For one, the 6-foot-2 Parks had one of the most chiseled physiques of the time, on his frame, which he carried at around 225-230 pounds, with 17-inch biceps, and 50-inch chest expansion. 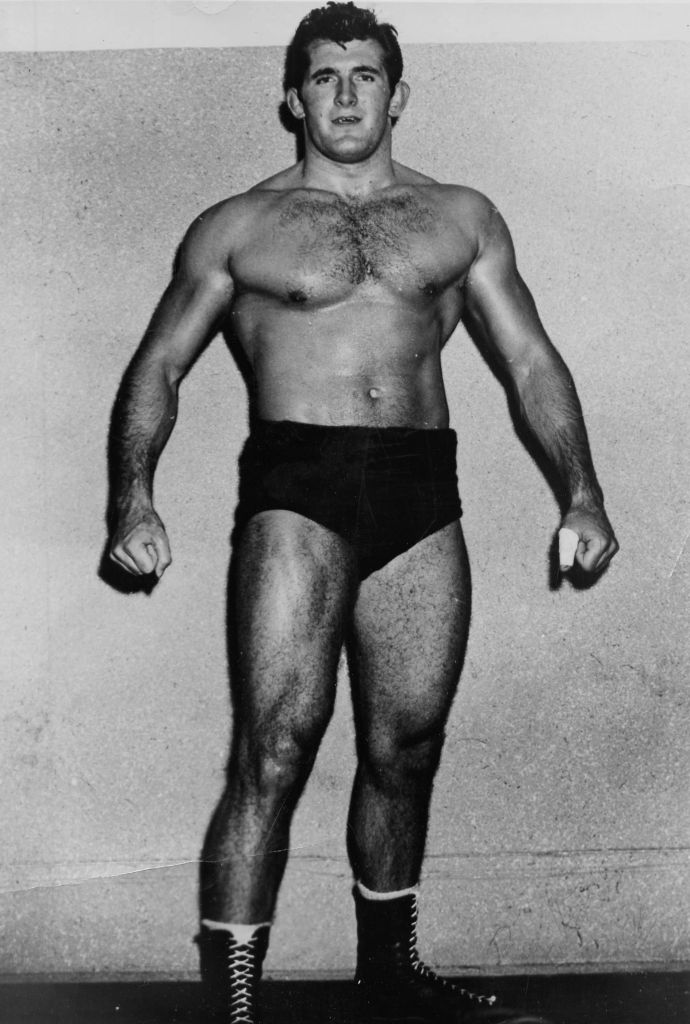 The always in shape Reggie Parks.

One profile in a 1967 Wrestling Revue magazine was titled “Body Beautiful … That’s Reg Parks” and in a 1965 profile writer Tom DeCola claimed that Parks “got his profile at the same shop the Greek Gods used to shop in. Recently a female wrestling fan addressed a letter simply, ‘Magnificent Creature, Omaha, Nebraska.’ Reggie got the letter without delay.” Asked about the letter, he said, “I used to get mail there — Reggie Parks, Omaha, Nebraska, and it used to get to me. … You used to walk down the street, people would yell at you, horns would be blowing, ‘How are you doing!?'”

Of course, not everything can be believed from the wrestling magazines. Parks was regularly promoted as being from Melbourne, Australia, which, one supposes, is more exotic than Edmonton. 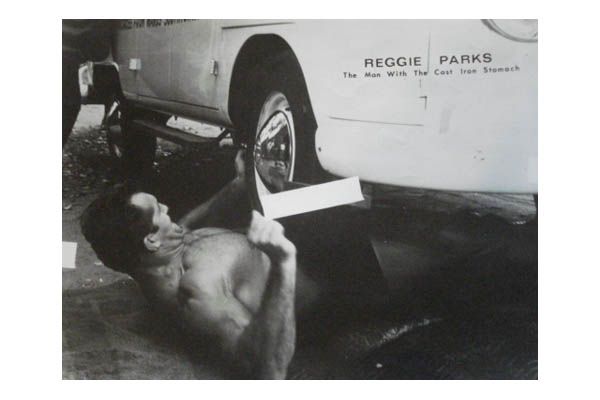 A promo photo showing a car on Reggie Parks.

Pictures do not lie, though, and there were a few occasions where Parks would let a Volkswagen Beetle drive over his stomach, with just a towel covering his “cast iron stomach.”

Or he’d allow a fan to jump off a ladder onto his stomach. 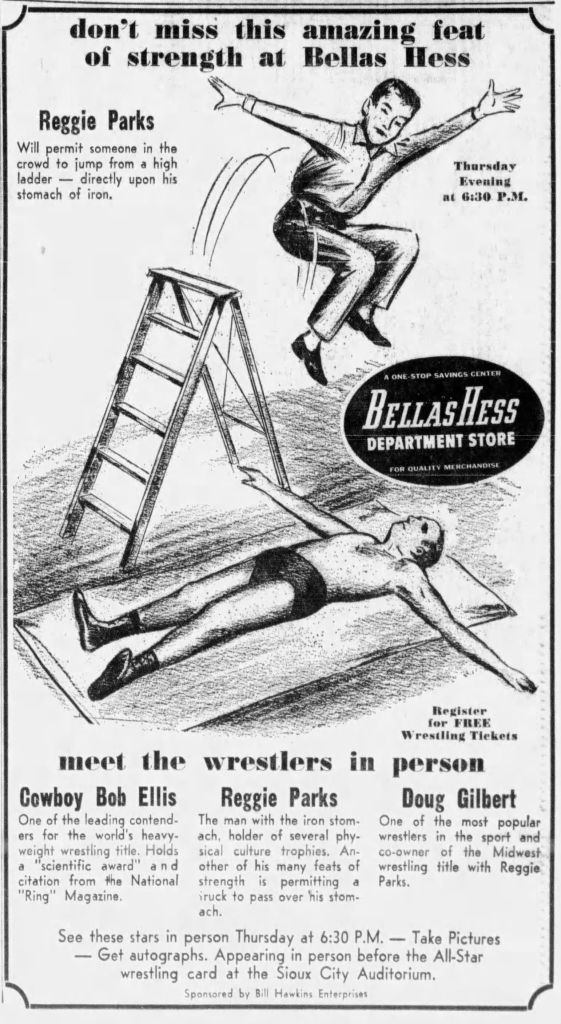 He loved working out. “I was very discipled. Hell, I’d be the first guy in the gym in the mornings to work out, to play racquetball, handball, use the weights. … I kept the tools of the trade sharp,” he said. It was mainly YMCAs in the early days, but training gyms started to come into fashion as Parks’ career progressed. “A lot of places, the gyms would let you workout for free. That was always quite common.”

Parks said he never heard of steroids until meeting a young Superstar Billy Graham in the early 1970s. “In those days, you were all natural, that’s for sure! I credit it to good beer, I guess.”

Challenged to think about it, Parks figured he was a bad guy “in the odd spot” but for the most part he was a Grade-A hero.

“I was too young and too pretty. I didn’t want to be a heel anyway,” he chuckled. Parks never found it tough to be a good guy. “It’s just a natural Canadian thing. I was always nice.”

There is a skill to being a likeable babyface, he noted. “It’s about how you portray yourself. You do something that people like. It’s awful easy to do something people don’t like.”

The opponent had a lot to do with it, Parks added. “You’d get these big, burly oldtimers in there that would beat the hell out of you. You’re automatically out there typecast as a babyface when you’re young. Your old gruffy old guys were just natural heels.”

As a long-time hero, including under a mask, circa 1980, as The Avenger (“It was just a name”), Parks had some Babyface vs Babyface matches and gave some thought to them.

“Once in a while, they’d book you in babyface matches, but you could … no, it was kind of easy. Either guy could be the heel — not an out-and-out heel, but you could do something, and whomever the favorite was, you were a good guy wrestling a good guy that was established in that area,” he mused. “The general audience would sort of pull for the guy they knew. You were fine, you were okay, but they kind of pulled for the guy that they knew, their favorite.” In the Minneapolis territory, Parks faced Billy Robinson in many babyface matches.

Parks noted that he “preferred to be in the ring with somebody who was established. It was an easier match.” 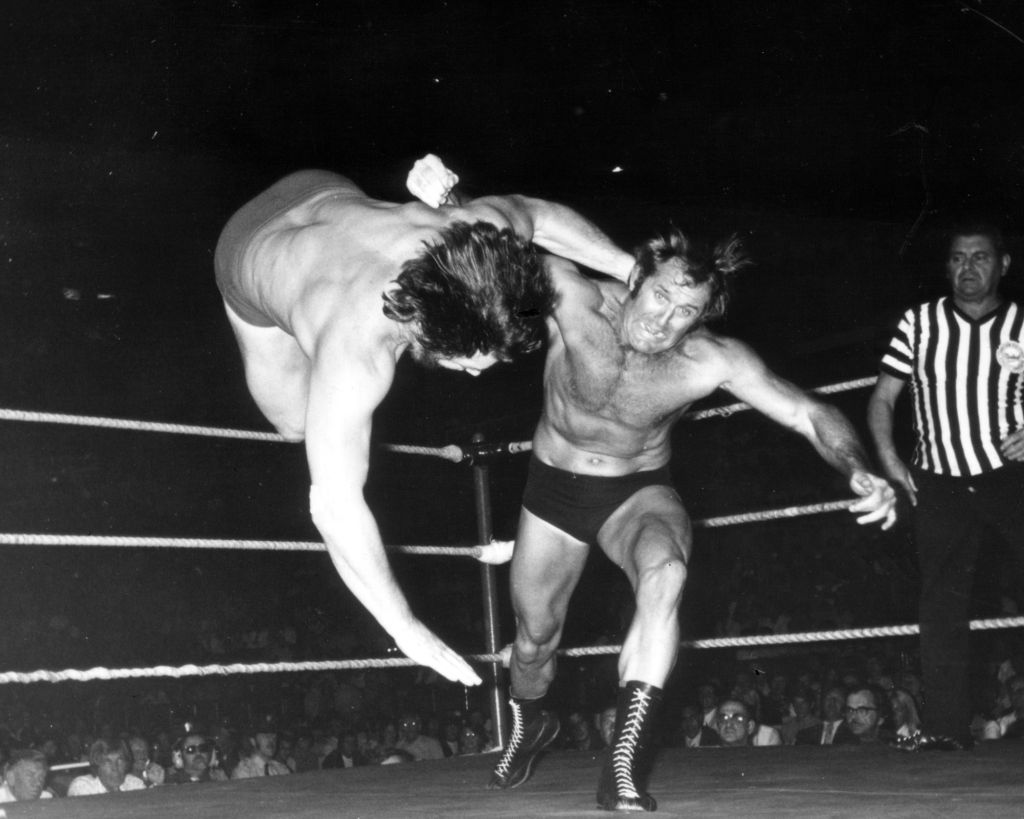 He mentioned Lord Alfred Hayes, again in the Minneapolis-based territory. “We were in the ring 15 minutes, never touched each other, and had a riot. We had women jumping in the ring, hitting him with their purses. He was great. Never had to do a thing — those are the matches I liked!”

That brings up the master of psychology. “Johnny Valentine used to stand in the corner and look at people and they’d hate him. They’d be ready to kill him and he never did anything. Master psychologist in the ring. … I wrestled John in Seattle when I first started. He was an up-and-down kind of guy, all kinds of highspots, he could really move and do all kinds of things. After a while, he changed his style. He told me one time, ‘The promoters never knew it, but when my knees got bad, I could hardly move, I could barely walk.’ He changed his style and became successful that way. He’d just stand there and beat the crap out of everybody.”

For someone so associated with wrestling belts, Parks held few during his actual career. In 1961, he was half the NWA World tag champions out of San Francisco, with Enrique Torres, and, based out of Omaha, he was Midwest tag team champion six times between 1967-71, his partners including Woody Farmer, Stan Pulaski (Eric Pomeroy) and Doug Gilbert (Doug Lindzy). 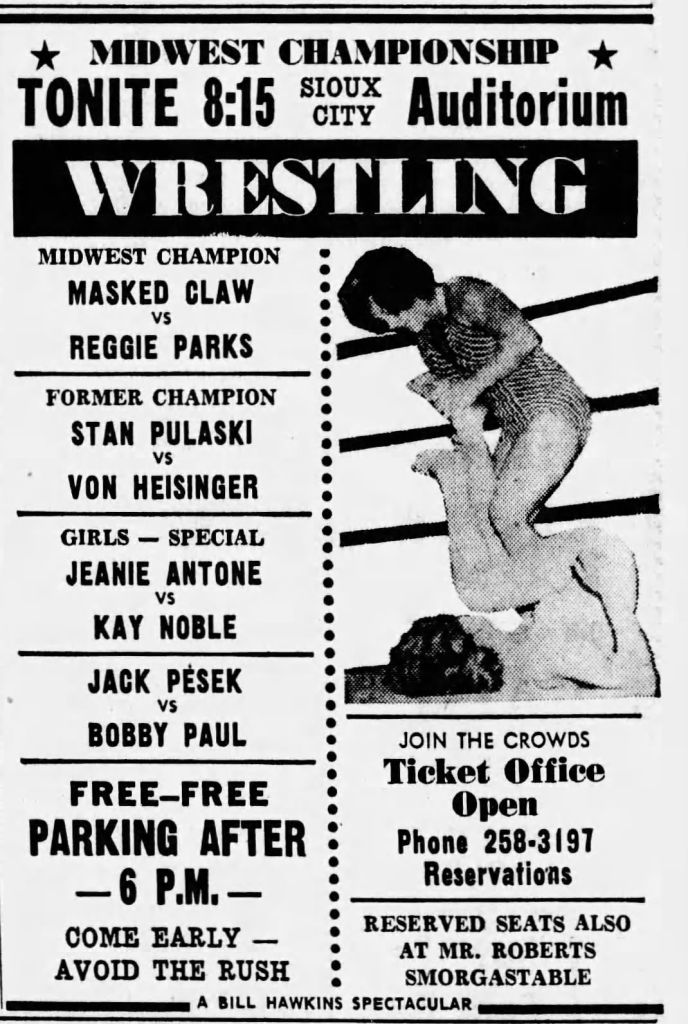 “I wasn’t a young guy anymore, and I wanted to get out of the business,” he said. “There’s so many stories and things, places. It was a constant adventure every night to travel. … It was great fun.”

“When I finished my career in Tampa, Florida, I worked a little bit on and off, here and there, refereed for the WWF. In the early days, everybody would get a six-, or 12-pack of beer, and get in their cars and drive. Hell, it was a party every night, lots of fun, everybody was having a good time. Then in Florida, I traveled with the bloody pot smokers, and they’d get in the car, light up, and you wouldn’t hear a word out of them for 200 miles, like zombies. I’d be in the back, drinking my beer, listening to music. I’d think, ‘These guys are really having fun.’ … Pot just changed everything. It was way, way, way different. Nobody seemed to have the, I don’t know, the fun, the spunk, like the old guys used to.”

On the personal front, Parks never had any children. He was married and divorced once, and lived in Arizona with Trish for 22 years, until her passing in 2006.

Another love was motorcycles, and Parks had a 1988 custom soft-tail Harley-Davidson that he drove from Arizona up to Edmonton numerous times. For years, he made the drive to Los Angeles or Las Vegas for the Cauliflower Alley Club reunions, where he was presented with the 2009 Art Abrams Lifetime Achievement Award.

Asked about the award, Parks was modest. “It’s something you’ve done for a lifetime, I guess. I don’t know.” Parks was at the 2021 Cauliflower Alley Club reunion, popping in to say hi, but skipping the formal events to gamble.

In 2009, Parks lamented, “I go, and there’s a lot of people I don’t know anymore, a lot of the guys are gone. Every year, you lose more and more members there.”

The beltmaking empire of Reggie Parks will be covered in a separate story.