One of the special parts of induction weekend at the Professional Wrestling Hall of Fame is hearing what the stars themselves think of the museum in Amsterdam, New York.

Whether it’s their first visit or fourth, there’s always something new to see. 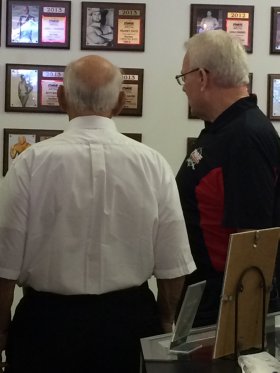 Johnny Walker and JJ Dillon consider the names inducted into the Professional Wrestling Hall of Fame. Photos by Andrea Kellaway

On Saturday afternoon, a few hours before he was to be inducted in the PWHF for his role as Mr. Wrestling II, Johnny Walker (sans mask) was wandering the museum with his youngest son, Robert.

SLAM! Wrestling caught up with him as he was slowly making his way along a wall featuring hundreds of publicity photos, for wrestlers big and small.

“I’m knocked out, believe me. It’s the most magnificent thing I’ve seen in ages. It’s absolutely gorgeous,” gushed Walker. “They’ve got guys on the wall that I used to wrestle back in the ’50s and ’60s — ’49 actually was the first time. God Almighty, I can’t believe they have so many fine fellows out here. I’m flabbergasting, I don’t mind telling you. I really am.”

The other half of the Walker family’s wrestling connection was his wife, Olivia, who died in 2000. She was a seamstress and is responsible for many of the famed ring wear from the 1970s and 1980s.

Walker was pleased to see his wife’s work on display too. “The robes over there, I see robes that my wife had made many years ago for Ric Flair, Lou Thesz, Paul Orndorff, many of them.”

Barbara Goodish, widow of Frank Goodish – better known to wrestling fans as Bruiser Brody – shared her thoughts on the Hall of Fame while accepting Brody’s induction into the PWHF.

“The most awesome experience I have had, just walking into that building and seeing, two floors of just walking around. I wish I had been here a week, and I still wouldn’t have seen everything. It is just phenomenal,” she said. “I was taking a picture of the 2014 inductees, and my camera froze. It’s never frozen before, it’s never done anything else. Is that a sign, or what? It’s like saying, ‘You’re doing what’s right, you’re actually here and accepting this award.’ I’m honoured, just honoured. I wish he was here accepting it instead of myself.”

During the main event of the PWHF induction, Bill Eadie took to the podium, entering the Hall as the Masked Superstar. It was his second visit to the PWHF building.

“I went to the Hall of Fame last night. [PWHF President] Tony [Vellano] was nice enough to open it for us,” Eadie said. “I was here a couple of years ago — I thought it was a couple of years ago, but it was 2003. My God, it’s grown. My daughter and son-in-law were with me. I was looking at the pictures, the articles, and it brought back so many good memories.”

In Calgary, Bob Johnson has been involved in the wrestling business for decades. He hosts a radio show and had Tony Vellano and Cowboy Johnny Mantell on to talk about PWHF induction weekend.

Vellano and Mantell, who chaired the selection committee this year, talked so well about it, Johnson made a last-minute decision to attend.

“I’ve been in the business a long time. I said to hell with it, I’ve got a Visa card, I’m going down,” said Johnson, adding that the Hall was “far beyond expectations. It was a wonderful experience.” 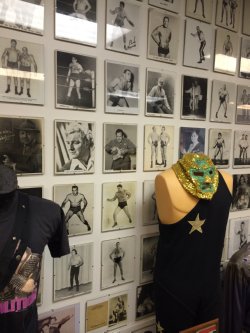 The host of the induction banquet was B. Brian Blair, and it was his second visit to the Hall of Fame building.

“If I was here five times, I couldn’t see all the wonderful stuff that’s here. It’s absolutely amazing,” said Blair. “So much from A to Z. Every wrestler that you’ve heard about, thought about, dreamed about, they’re all here. And the way that everything is displayed, it’s fantastic.”

Blair said that he loved everything — “jackets, pictures, boots, pants, action figures, posters from Japan. You name it, it’s here.”

Though it’s a bit of a cliché, Blair did urge those who love professional wrestling to make it to the Professional Wrestling Hall of Fame.

“I think every wrestling fan, sometime in their life, they’ve got to put this on their bucket list,” concluded Blair.

For fans wanting to visit the Professional Wrestling Hall of Fame, it’s in Amsterdam, NY, which is about an hour east of Albany, along the I90 Interstate. It is free to get in, but only open on weekends.

Greg Oliver is the Producer of SLAM! Wrestling. His son, Quinn, contributed to this report by asking Mr. Wrestling II one of the questions. Greg can be emailed at [email protected], and you can follow him on Twitter @gregmep.