Several wrestlers making their inaugural appearance at the reunion, and, in one case, a veteran returning after a long absence, entertained a large crowd at the club’s Baloney Blowout. 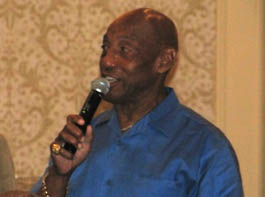 Earl Maynard chokes up addressing his many old friends in the audience. Photos by Steven Johnson.

Among the first-timers were bodybuilder-turned-pro Earl Maynard, who traveled from Barbados. An emotional Maynard said he was pleased that he finally decided to attend the reunion because it gave him a chance to see people he had not seen in decades.

One of the colleagues with whom he reunited was Pete Sanchez, who wrestled mostly in the Northeast for about 30 years and also was making his CAC debut. Sanchez recalled he worked with Maynard in New York in the late 1960s.

“I’m honored to be here,” said Sanchez, a big supporter of the Pro Wrestling Hall of Fame in upstate New York. “It gave me an opportunity to see guys like Bruce Swayze that I haven’t seen in 40 years.”

Canadian Dan Kroffat, who also was King Crow in California, spoke passionately about his CAC attendance, saying: “This is a gathering of people who have created a legacy for wrestlers in the future and wrestlers who have gone, and I consider it a privilege to be among them.”

Among other new faces at the reunion were Dean Higuchi, a tag team champion in the WWWF in the 1970s, and Killer Karl Kox, considered one of the best and toughest heels of his era. 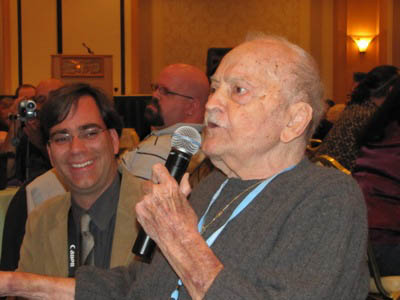 Greg Oliver, one of the Baloney Blowout hosts, tries to get the microphone away from Ted Tortaus.

The star of the Baloney Blowout, a deli meat and sandwich tribute to the days when wrestlers’ dinners consisted of baloney sandwiches en route to their next stop, unquestionably was Ted Tourtas. The 90-year-old vet broke into the business in 1941 and counted stars like Jim Londos and Leroy McGuirk as close friends.

Tourtas was involved in CAC functions at the club’s onset in the 1970s, in part because of his relationship with Mike Mazurki, the wrestler and actor who got the organization off the ground.

After a long CAC absence, once Tourtas got control of the microphone during an open chat hosted by SLAM! Wrestling’s Greg Oliver, he was not about to let go. He launched into tales of some of the greats he knew, including Dr. John Bonica, a famous doctor and wrestler. Among his tidbits, Tourtas recalled that he once lent a mask so Bonica could work under a hood at carnivals to earn some extra money for his medical pursuits.

As for his own skills, Tourtas laughingly said he banned the dropkick from his repertoire when he tried it once and hit his opponent in the kneecap. The audience gave Tourtas a standing ovation for his performance.

Awards handed out at the blowout included posthumous honors to Lee Fields, the Alabama wrestler and promoter, whose family was in attendance. Cowboy Bob Kelly presented the honor, and choked up as he related still wears a belt buckle that his friend once gave him.

The family of George “Scrap Iron” Gadaski, best known for his work in the American Wrestling Association, accepted a posthumous award in his name. Derek Kosti called his dad “one of a kind. He was a man of the people.” 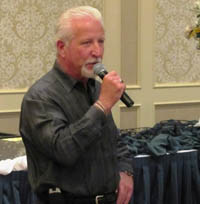 Vince Fahey, who runs the Kayfabe Memories website, was recognized with the Red Bastien Friendship Award for his support of the club. Longtime Minneapolis wrestling announcer Mick Karch called the popular site, which is marking its 10th anniversary, “a place for all of us to reunite.”

The James C. Melby Award for excellence in wrestling history went to Vance Nevada, an expert on wrestling in western Canada and a name well known in historian circles.

Also announced at the blowout was the formation of the Female Fighting League.

Jason Deadrich, a CAC board member, said the organization is planning to hook up with promoters and women wrestlers around the world to upgrade the quality of women’s wrestling, saying it often overlooks skills and athletic ability at the national level.

Melissa Anderson, known as Cheerleader Melissa, is a part of the group and said she sees it as a way to “get women’s wrestling back on track.”