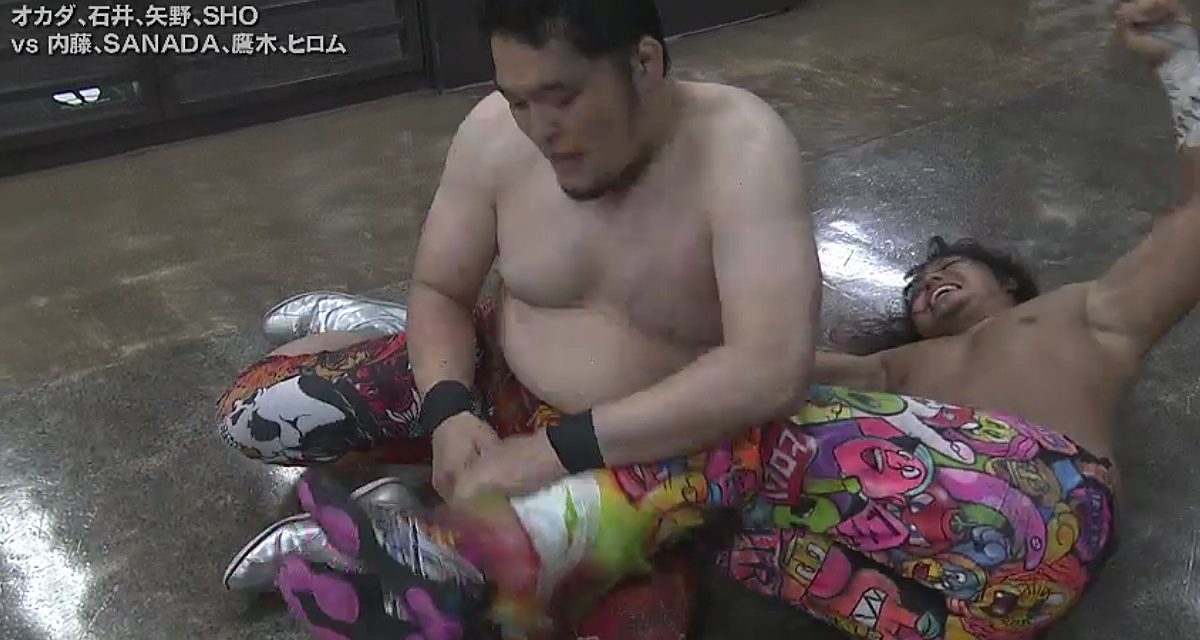 The most interesting bout of Night Four of the NJPW Cup was one that was not even part of the tournament.

IWGP Junior Heavyweight Champion Hiromu Takahashi spent the night being terrorized by Toru Yano, a pair of hair clippers and his trunks which rivaled those of Mister Fantastic of the Fantastic Four.

From the very start, Hiromu was terrified stepping through the curtain. He wouldn’t even approach the ring without his Los Ingobernables de Japon back-up. Yano and Hiromu began the match with Yano extended his hand in friendship. A visibly frightened Hiromu backed off into one of the corners. He demanded that the official search Yano before they locked up.

The official found a spray bottle of disinfectant in Yano’s pant, under his knee pad. Yano pulled an electric razor from his pants while the official was confiscating the bottle. Hiromu loses his mind shouting at the official. Hiromu runs for his life. He demands the official do something. 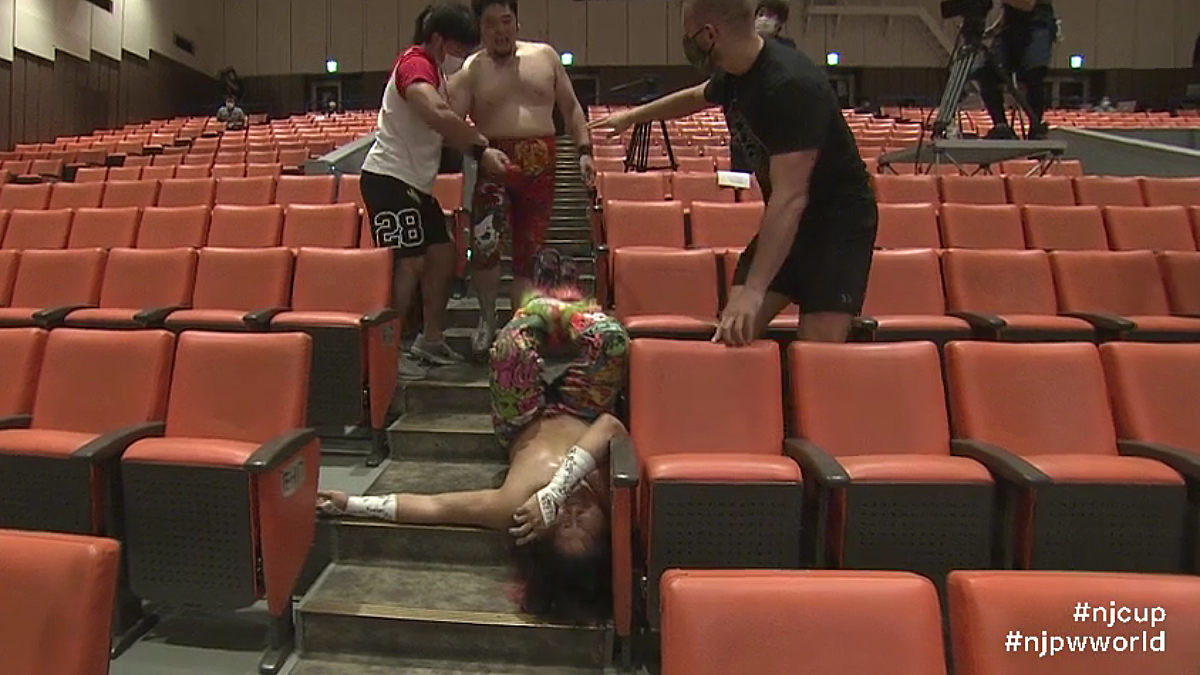 Later on, Yano retrieves another smaller electric razor out of his tights. How much room does Yano have in those tights? Is this like Doctor Who and the TARDIS?

Yano chases Hiromu around the arena and into foyer brandishing the clippers. Yano catches up to Hiromu who begs off. Yano slams Hiromu on the floor then hog-ties him with athletic tape as the official continues his count back in the ring.

Okada runs into the foyer, stopping Yano from shaving Hiromu warning Yano of the official’s count. Yano takes off running. Hiromu begins hopping. Neither can beat the count back. Young Lions stop Yanu from shaving Hiromu…this night. Both teams are counted out. 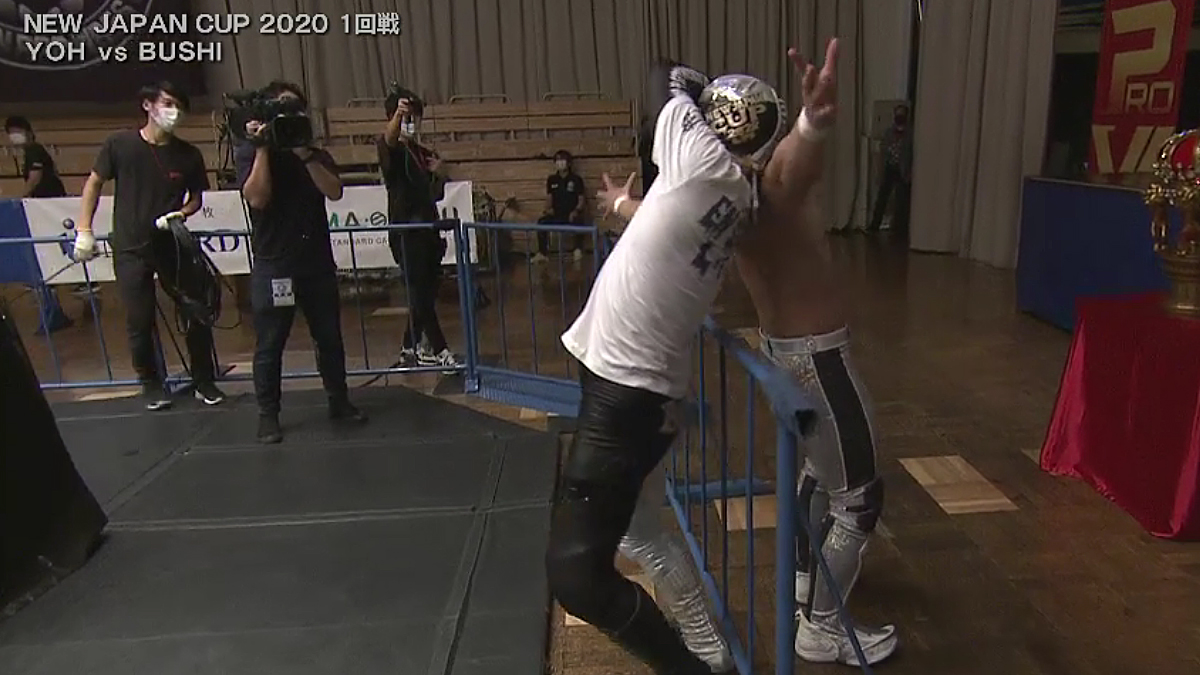 Bushi gives Yoh a neckbeaker on the barricade. Courtesy: NJPW.

Bushi is the first to turn what should be a great technical confrontation to a nasty brawl. Yoh counters with a plancha on Bushi on the floor. Bushi whips Yoh into the ringside barrier as the official issues warning after warning to him. The final straw is when Bushi gives Yoh a neckbreaker on the railing. Bushi is ordered back into the ring as the count is laid on Yoh. Yoh jumps back in at 18. Bushi has to reach for the ropes to escape a figure four leg lock by Yoh. Bushi DDTs Yoh on the apron. Bushi’s spinning neckbreaker has Yoh barely kicking out. Yoh counters MX with two German Suplexes. Bushi moves on in the tournament by pinning Yoh with MX.

Yoshi-Hashi may be as bland as unmarinated tofu but he has been giving his all lately in an attempt to break through to the next level. This match is no exception. Although Tenzen is still a powerhouse at 49, the former NJPW nWo member cannot out-wrestling Yoshi-Hashi on this day. Yoshi-Hashi impressively makes Tenzen submit to the Butterfly Lock.

No surprise that Bullet Club gets dastardly here. Jado distracts the official so that Yujiro can put his pimp stick into action. Yujiro misses with it, collides with Jado and is pinned by Goto’s GTW.

Kojima and Evil are like to trucks colliding. It is brute force versus brute force. Evil pins Kojima with Everything is Evil.

Except for the opening match and the comedy bout between Chaos and Los Ingobernables de Japon this was a fairly predictable night of NJPW action.