Even though it delivered, first dual Royal Rumble was emotionally exhausting 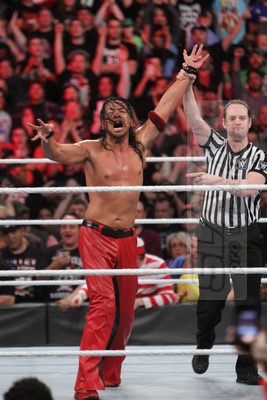 PHILADELPHIA – On a night that really was as historic as WWE claimed it would be, we learned a few things amidst an enthusiastic Royal Rumble crowd at the Wells Fargo Center in Philadelphia. Foremost among those lessons was that while having two Royal Rumble matches on the same card can be done successfully, it’s asking a lot of even the most hyped up fans to stick with them through all the emotional ups and downs.

The men’s Rumble found itself in a place it’s never really been: the middle of the card. That wasn’t a problem in and of itself, as this year’s battle royal was booked beautifully and the fans ate it up. We got comedy bits (poor Heath Slater), a quick elimination, multiple overlapping subplots and the surprise return of Rey Mysterio, all handled in fine fashion. The final four was an effective mix of established stars and those still on the come up as John Cena and Roman Reigns tangled with Finn Balor and Shinsuke Nakamura.

The ultimate pairing of Reigns and Nakamura was even better, as there was legitimate tension in the air about who would emerge victorious. It was one of those times when WWE used the history of a certain locale to its advantage, which was fitting considering the Reigns triumph in Philly three years ago was one of the more mystifying missteps in recent memory.

Yet Nakamura’s popular victory effectively killed the crowd, and the two title matches that followed it were eerily quiet. The tag team bout that saw The Bar defeat Seth Rollins and Jason Jordan for the belts was more storytelling than amazing action, but plenty of people used it as an excuse to hit the bathroom or reload on food and drink. 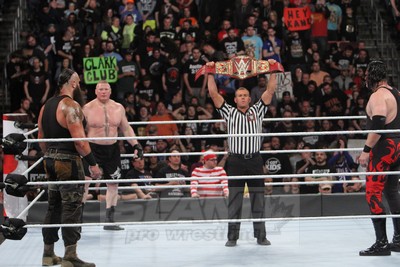 The Universal title up for grabs.

The same could be said to a lesser degree for the Triple Threat Match for Brock Lesnar’s Universal Championship. With a strong build and the rising popularity of Braun Strowman, this could have been the centerpiece of another card, but it suffered in-between the two Rumbles. It didn’t help that some of the tables were uncooperative, leading to some less than spectacular destruction, but the feeling in the arena was understandably one of anticipation for what was still to come.

For the most part, the Women’s Rumble delivered despite the very real issue of the current roster only holding about half the number of women needed to stage it. The returns were numerous and welcome, and Lita and Michelle McCool, specifically, were allowed to have crowd-pleasing sequences instead of just entering and being ushered out. 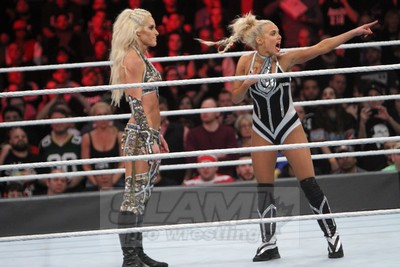 Asuka was a worthy winner, and it made sense to continue building her up as an unstoppable force all the way through WrestleMania. Still, much of the talk is inevitably going to focus on what happened after Asuka won, when Ronda Rousey made her much rumored WWE debut. As an opening segment, it wasn’t much, as she simply pointed to the WrestleMania sign, offered a handshake to Asuka which was quickly rebuffed and pointed at the sign again.

Some fans in the Wells Fargo Center were clearly hoping the former UFC sensation would debut, even getting a small chant going for her prior to the No. 30 entrant (which ended up being Trish Stratus). However, bringing Rousey out after the match was over minimized her pop somewhat, because parts of the crowd were already filing out when her Joan Jett anthem hit.

On the way out, plenty of fans were jazzed that Rousey arrived, with some even suggesting that people who left early would be sad they missed her arrival. Others didn’t seem to get what the big deal was, and there was some thought that her presence meant the WWE wasn’t quite confident enough about the Women’s Rumble going on last without an ace in the hole.

Still, that pales in comparison to the undeniable truth from Sunday night (and not that Rusev Day is way more over than anyone could have dreamed, though that is also a fact). Assuming we get two Rumble Matches a year from here on out, WWE creative is going to have to be very careful about how they book things, because the fans just can’t be expected to keep up the same level of intensity for two battle royals and the matches in-between.

Put more bluntly, if the Philly fans hyped up over their Eagles’ trip to the Super Bowl in a week can’t stay at a fever pitch for that long, no one can. Booking team, you’ve got your challenge ahead of you for the 2019 Royal Rumble in Arizona, and a whole year to figure it out.