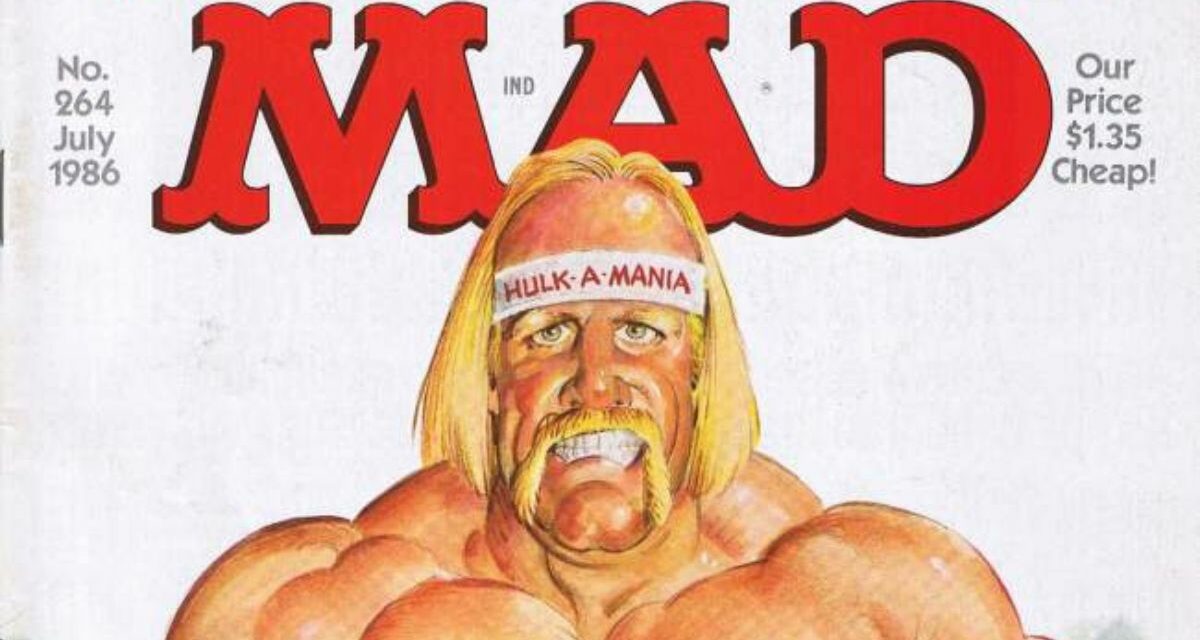 This has been a banner year for pro wrestling comic books, and I’ve had a blast reading (and reviewing) as many of them as possible, but pro wrestling and comic books are far from a new partnership. Some of the first mainstream pro wrestling comic books published in the United States were released in the early 1990s, when Valiant ran five issues of WWF Battlemania (1991-92), an oversized comic book perhaps known more for its striking cover art than the content within, and WCW struck what would in hindsight seem like a much bigger deal with Marvel, running 12 issues of WCW World Championship Wrestling (1992). Most of these pro wrestling comics centered around fictional stories of WWF and WCW pro wrestlers, and that particular style of wrestling comic has continued for years, whether it was the limited Undertaker and Stone Cold Steve Austin comics, published in 1999, or The Rock, published in 2001 (all by Chaos!), or the more recent WWE series of comics published by Boom! Studies from 2017-19. 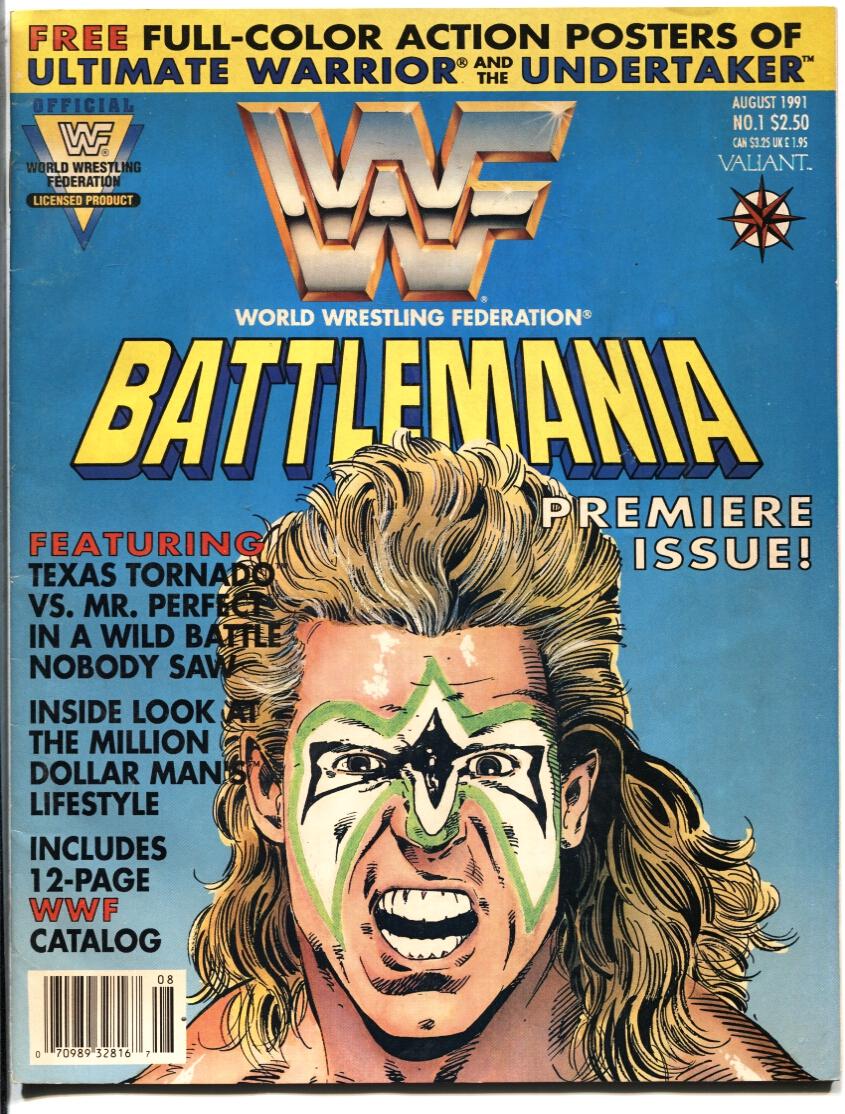 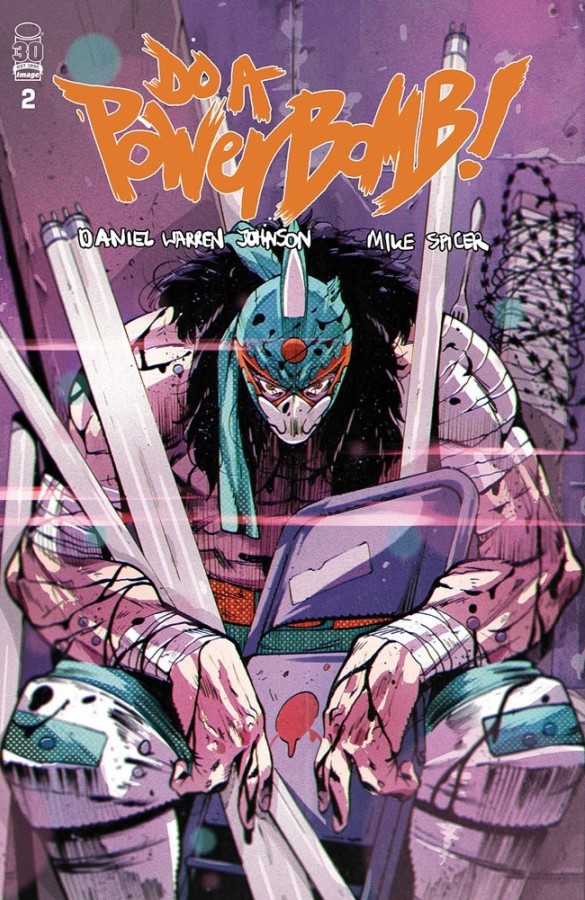 Perhaps the most famous example of this would be Amazing Fantasy #15, otherwise known as the first appearance of Spider-Man, when Peter Parker tests out his new “spidey” powers on wrestler Crusher Hogan, who was famously portrayed by the late Randy Savage under the name Bonesaw McGraw in Sam Raimi’s Spider-Man (2002) (please don’t break into my house, I promise I don’t own a copy of Amazing Fantasy #15). Despite this first example coming from arguably one of the most famous (and most valuable) comic books of all-time, this is a niche category, to be sure, but it’s fun and relatively inexpensive to collect, whenever I spot a new example in the wild. Other than Amazing Fantasy #15, I wouldn’t say there’s many, if any, other iconic, and hence expensive, wrestling issues of non-wrestling comics, which means I’ve acquired most of my collection for under ten dollars each.

One of the first comics like this I purchased was Mister Miracle #25 (volume 2, 1991), which features a one issue story of the character Big Barda wrestling for the Bad N Beautiful Babes of Wrestling. I found Mister Miracle #25 in a grungy, yellowed dollar box, where it likely sat untouched for years, until I saw its gorgeous Joe Phillips cover staring up at me, and brought it home to be bagged and boarded and added to my collection. 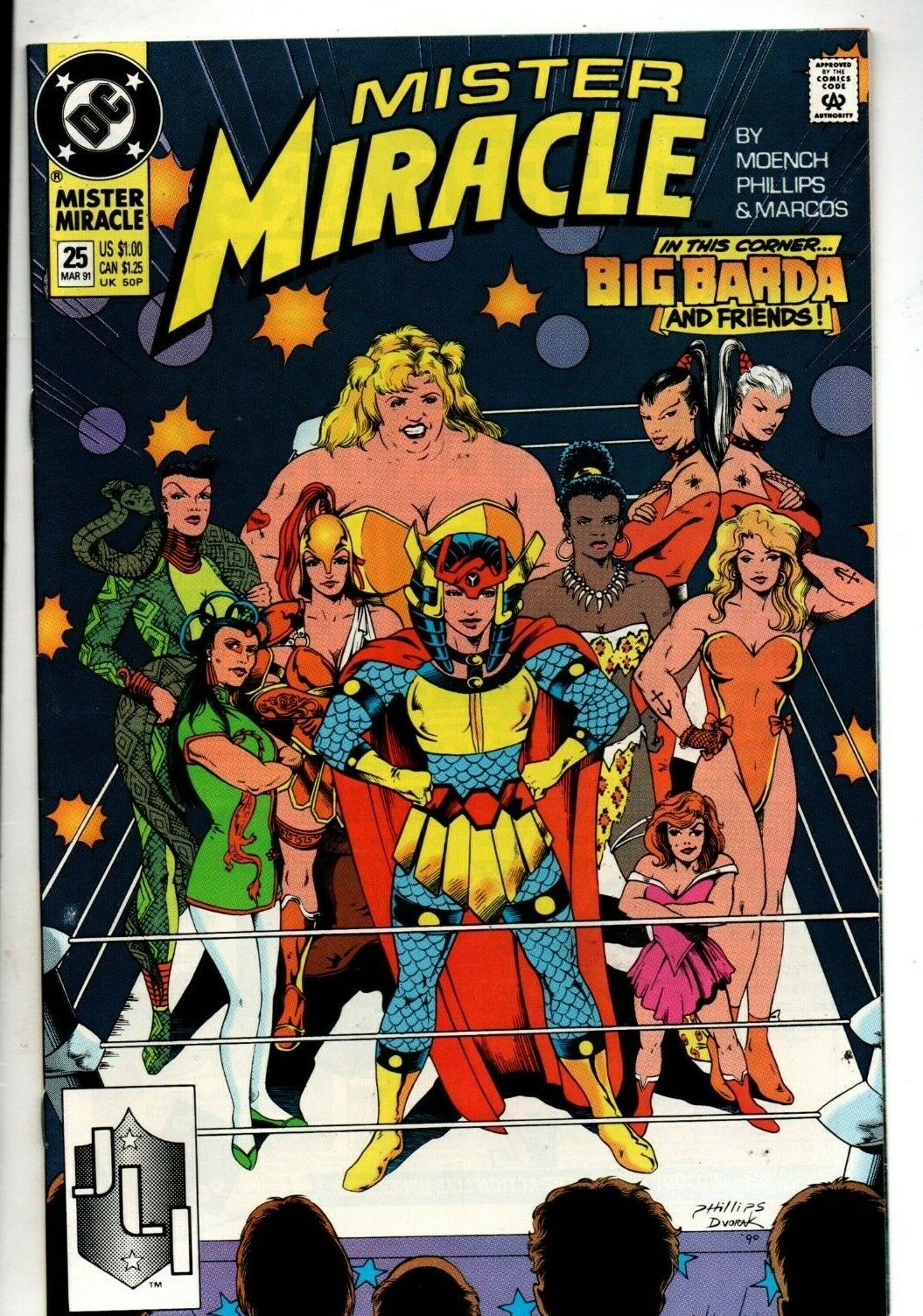 Another favorite example of a wrestling issue of a non-wrestling comic book is Howard the Duck #5 (volume 1, 1976). This one cost me a little more than one dollar, but it was worth every penny. Again, the main attraction for me was the beautiful Gene Colan cover, featuring Howard the Duck, smoking a stogie in red and white boxer shorts, posed in a wrestling ring with a hulking brute named Emile “The Goat” Klout. Only a small part of the story is actually focused on the wrestling match, with “The Goat” offering $10,000 to anyone who can beat him, and Howard the Duck doing just that, not unlike what occurs between Crusher Hogan and Peter Parker in Amazing Fantasy #15. 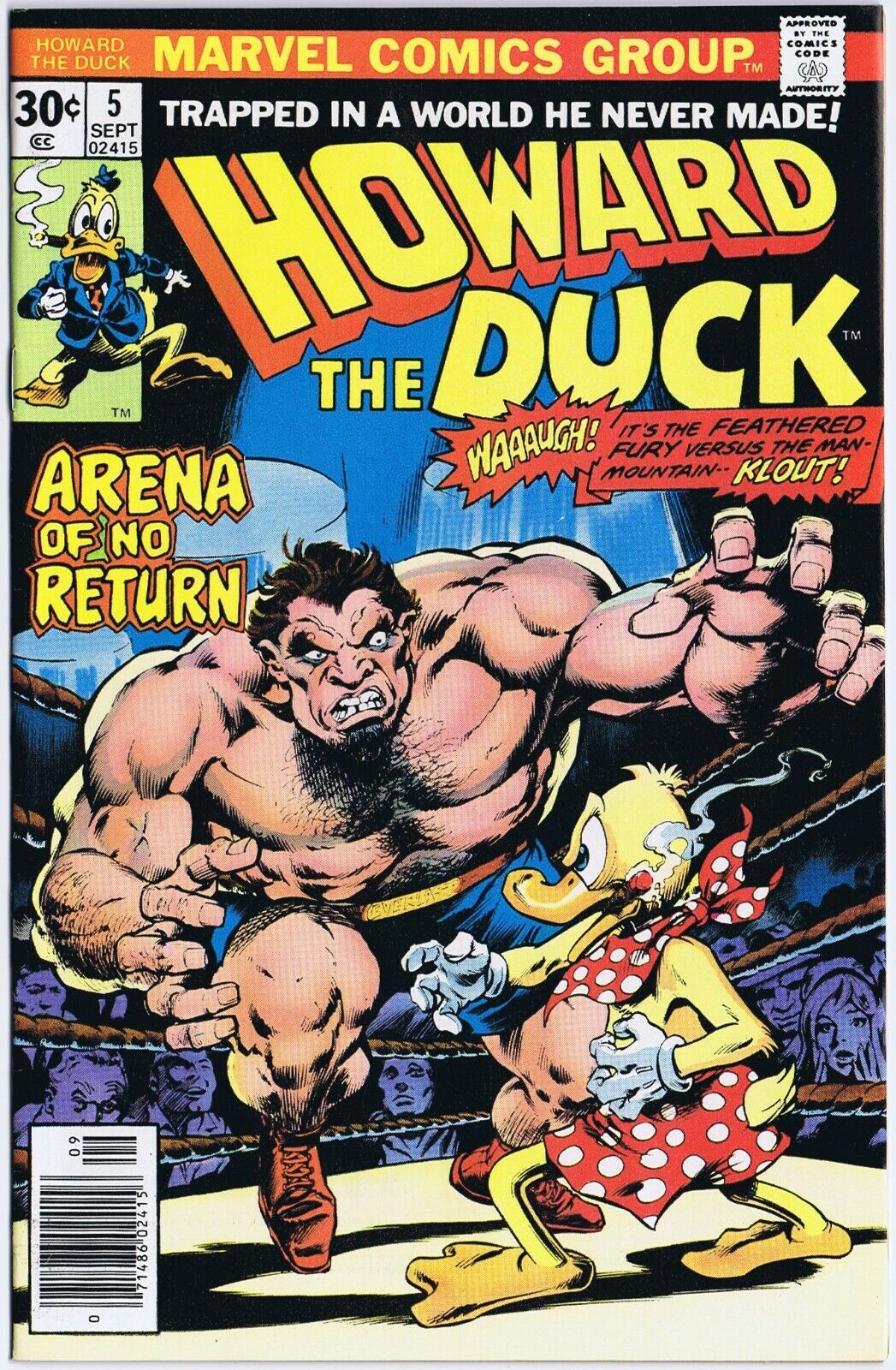 The most recent example I found of a wrestling themed issue of a non-wrestling comic book was The Ren & Stimpy Show #23 (1994). This comic is actually a loose adaptation of an episode of The Ren & Stimpy Show titled “Mad Dog Hoek” (1992). In this comic, Ren and Stimpy appear as masked wrestlers Mad Dog Hoek (Ren) and Killer Kadoogan (Stimpy) to take on the tag team champions, the Lout Brothers (one letter off from Howard the Duck’s opponent, Klout). The cover advertises this as the “Madcap Rasslin’ Issue!” so readers can safely assume that hilarity will ensue within. 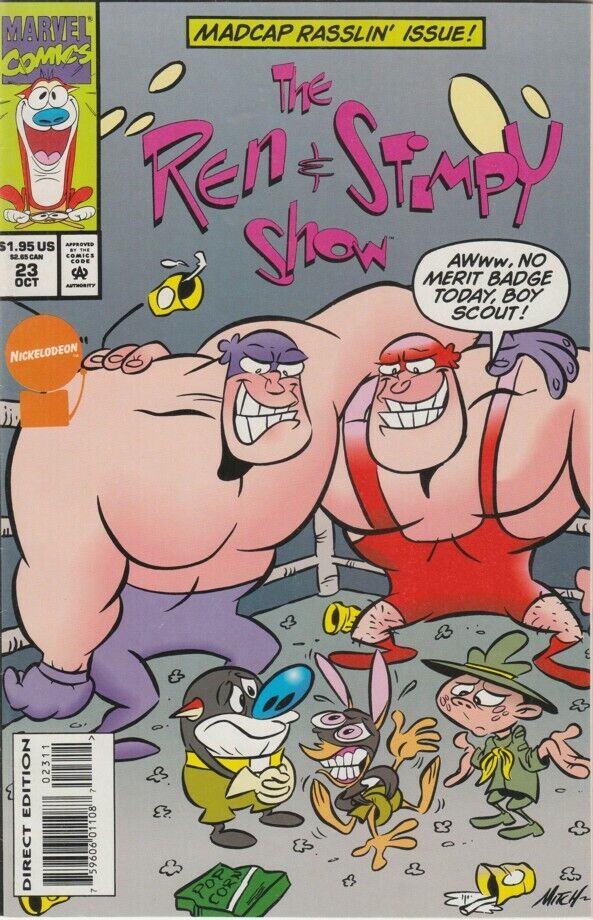 There’s an obvious trend of professional wrestling being used for comedic effect, and I get it, professional wrestling is an easy target for satire, so while some may consider it an illustrated humor magazine, rather than a comic book, MAD Magazine, which is currently celebrating its 70th anniversary, features some of my favorite pro wrestling issues and covers. The earliest wrestling-themed issue of MAD Magazine in my collection is number 264 from July 1986. This issue advertises parodies of wrestling, Rambo, Rocky, and Moonlighting, but the main attraction is the signature Mort Drucker cover featuring an inflated caricature of Hulk Hogan, wearing a championship belt and Hulk-A-Mania headband, contorting the scrawny body of MAD’s mascot, Alfred E. Neuman, who’s sporting his own Yecch-A-Mania headband. 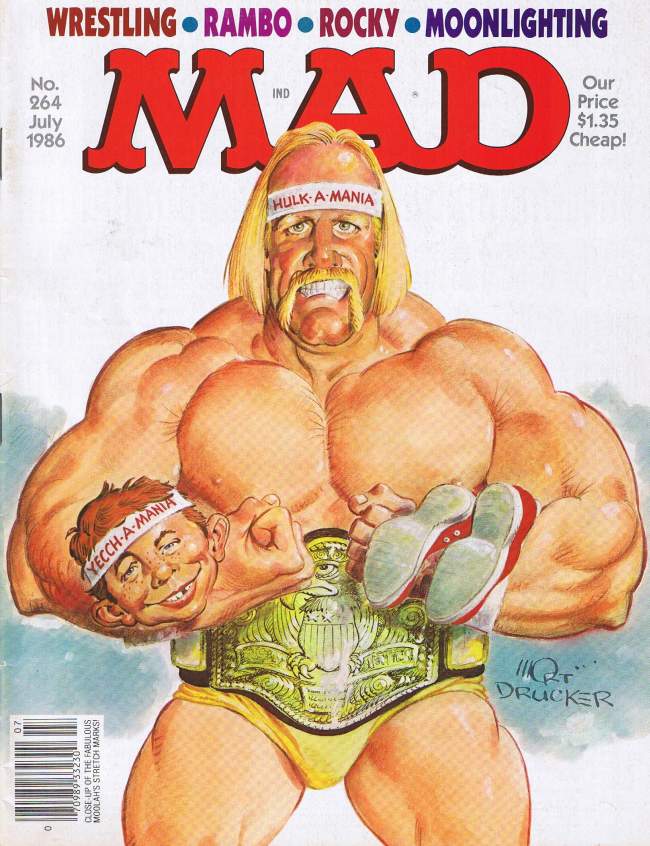 Three years later, in October 1989, for issue 285 of MAD Magazine, Drucker would return to the theme of professional wrestling, but this time, Hulk Hogan would be joined on the cover by Andre the Giant, Macho Man Randy Savage, and Miss Elizabeth, who all appear to be looking with concern at an unknown opponent (presumably Neuman again) who’s been driven into the canvas, with only his bare legs and red high-tops sticking up through the ring. 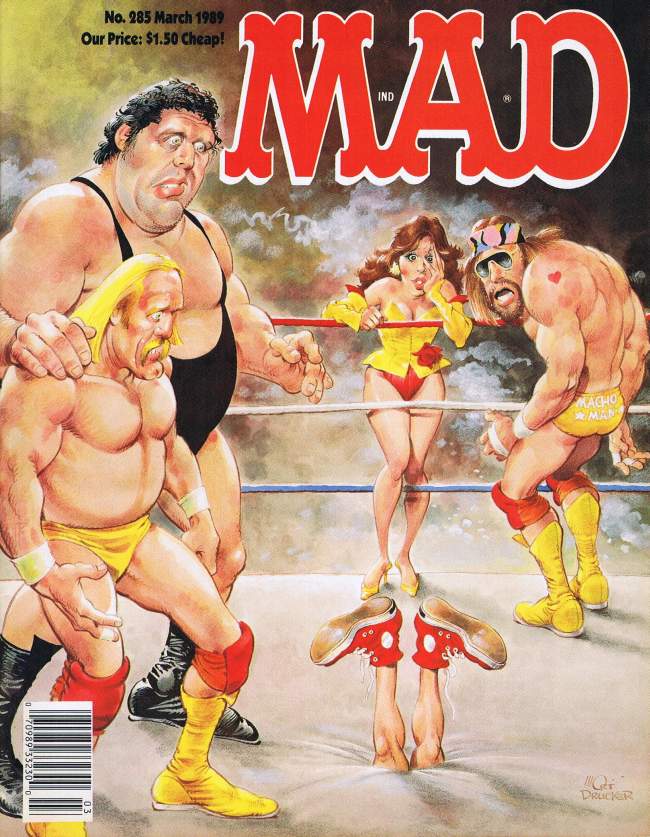 Then in March 1992, MAD released its Wrestling Super Special issue, featuring “96 pages of classic losers from the past” and “15 hulking pages of ultimate ring mayhem.” Once again, the cover was created by the legendary Drucker, who depicts Alfred E. Neuman, this time in a referee’s uniform, being pulled apart in four different directions by Hulk Hogan, Ultimate Warrior, Earthquake, and Undertaker. 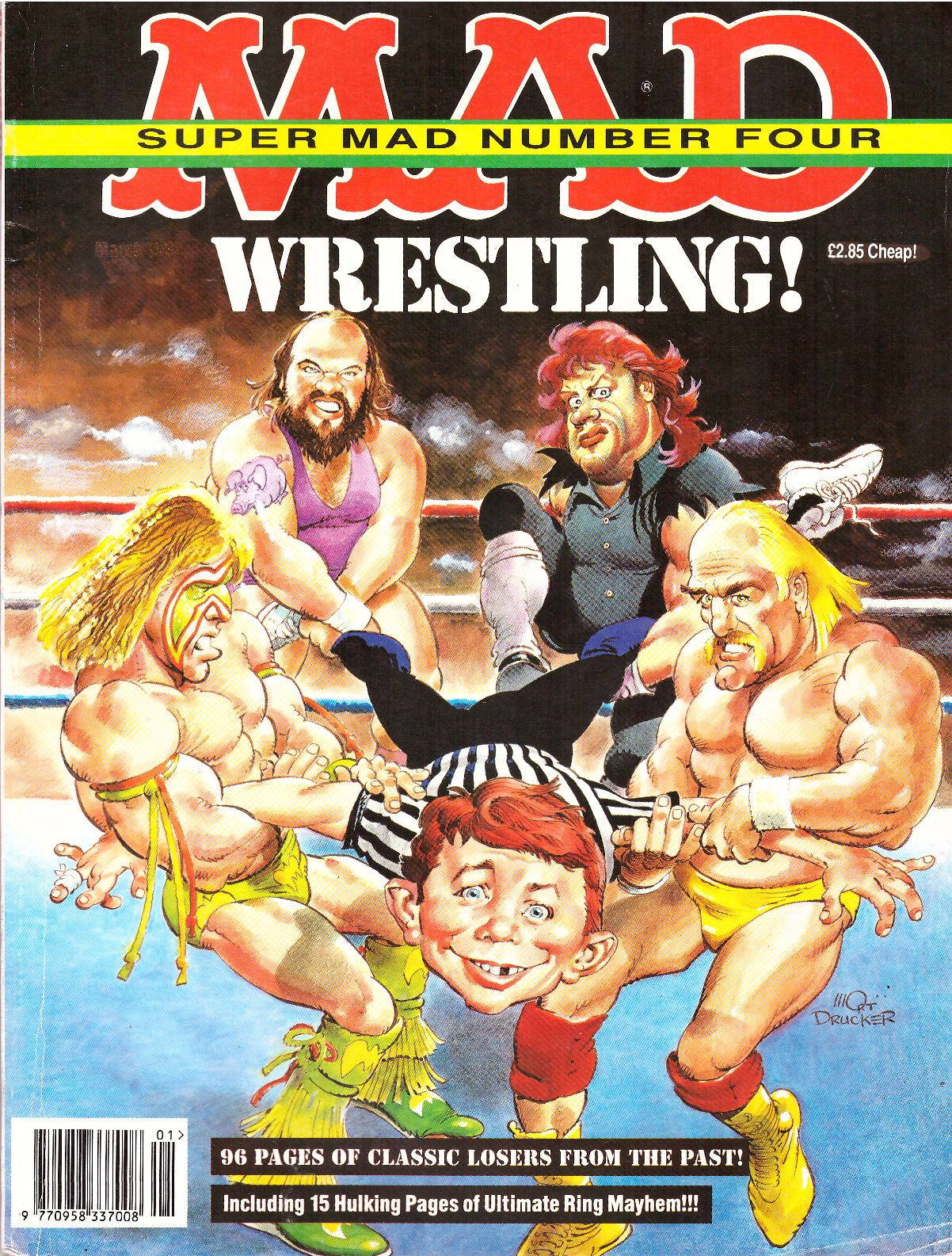 I’m aware of at least two later issues of MAD Magazine featuring wrestling parodies, a February 1998 special featuring an Undertaker cover and issue 378 from February 1999 featuring Stone Cold Steve Austin (both by Drucker, who died in April 2020). MAD‘s rival humor magazine CRACKED even took a few jabs at professional wrestling over the years (although I don’t yet own any copies of their wrestling issues). And as far as other wrestling-themed issues of non-wrestling comic books, I’m sure they’re out there, and when I find them, I’ll happily add them to my personal collection.

But in a way I hope I never run out of pro wrestling comic books to read and collect, and that writers and artists for years to come will continue to draw inspiration from the iconic characters and stories told within the squared circle.

If you have a favorite wrestling comic book or know of any that are missing from my collection, please leave a reply.