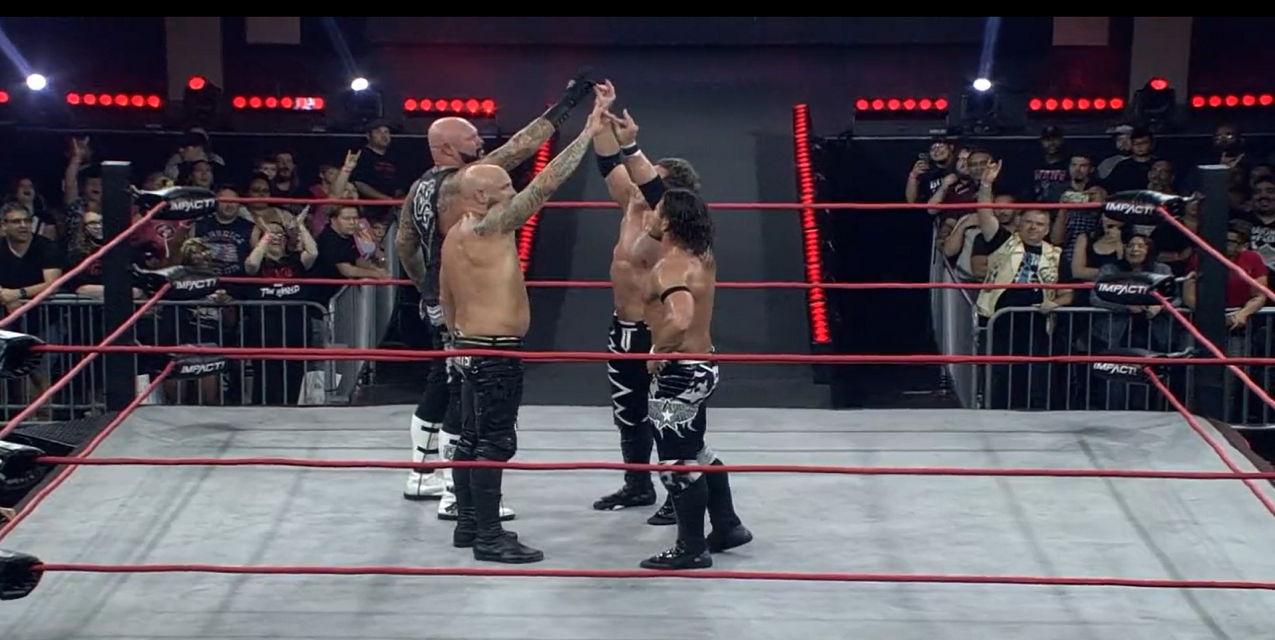 Greetings and Salutations all! We are working towards Victory Road on September 23rd and Bound for Glory on October 7. While the main event of Bound for Glory has been established as Josh Alexander defends his Impact World Championship against Eddie Edwards, we still don’t have much of a card for Victory Road in September. This episode of Impact should clear things up a bit more for both shows. Without further ado, lets get to it.

The match started with quick and forth action. There was a lot of each wrestlers style really shining through the early stages of the match. Bailey avoided a Baseball slide by rolling outside. He then hit a slingshot armdrag. Dorada then hit a suicide dive as Bailey was back on the outside.

When both men were back in the ring Bailey was taken down and Dorada went for a double stomp but Bailey moved our of the way. Bailey then locked in an inverted Dragon Screw to a heel hook BUT Dorada was able to reach the ropes for a break.

As the action continued both men ended up back in the ring and Bailey got Dorado down. He then connected on a standing Corkscrew Shooting Star Press. Both men were going back and forth and Dorada hit Bailey with a Backstabber and went for a Baseball slide BUT Bailey was able to turn that into a top rope Asai Moonsault.

The action continued and Dorada hit Bailey with a top rope hurricarana and went for a two count but it was only good enough for a two-count. Bailey then blocked a Quebrada and started kicking Dorada. Once Dorada was on dream street, Bailey then hit the Ultima Weapon and scored the three count for the win.

After the match Kenny King ran out and took Dorada out then turned his attack towards Bailey. King hit a Royal Flush on Bailey.

A promo aired for Violent By Design. Eric Young and Deaner are with trainees. Young wants to be called “The Designer”. Deaner beat up some trainees while Young made everyone else chant “I am Violence”

Mike Bailey was walking backstage after a tough match and is confronted by Scott D’Amore. D’Amore congratulated Bailey on his win against Dorada. He then informed Bailey that at Victory Road he will defend his X-Division title against Delirious.

We get a rundown and promo of the current Victory Road card which includes:

This was a very quick match where the basic premise was a “Can they Co-Exist”. The answer is no. There were communication issues between Maclin and Moose throughout the match which at one point caused Moose to be taken off the apron by Maclin. Taurus then used a schoolboy to ping Maclin.

After the match Sami Callihan came out with a mic in hand and asked for a video to be played. The video showed Maclin saying he will slug Moose’s head before Moose stabs him in the back. This caused Moose and Maclin to brawl at ringside. Callihan ran in with a barbed wire bat and hit Maclin in the stomach. Maclin dodged a second bat shot as Callihan stood tall

A video recap of last weeks match between Chelsea Green and Taya Valkyrie played.  Rosemary, Taya and Jessika argued over whose fault it was that Taya lost her match. Rosemary said that Kessika needs to prove her loyalty to her and Decay

This was a very fast squashy squash match that saw Kelly trying to attemot her Killer Klutch finsiher a few times and the third time was the carm.

After the match Tasha Steelz ordered Savannah to attack Kelly with a chair but Kelly took the chair away. Kelly and Steelz have a staredown in the ring.

.@Kelly_WP just took @MrsAIPAlisha's head off with a KILLER boot to the face! #IMPACTonAXSTV pic.twitter.com/kuRhDkvApF

Alexander and Bennett started the match off. Taven blind-tagged in and cut Swann off from Alexander. The OGK maintained control of the match while Swann couldn’t reach his tag team partner.

Alexander and Swann make their comeback as the hot tag was made and Bennett took the brunt of the attack from them. Taven and Bennett would eventually come back and this time they cut of Alexander from Swann. The OGK maintained control of the match qnd got a very close near fall after a Knee Stroke from Taven.

.@TheEddieEdwards tried to prevent Rich Swann and @Walking_Weapon from winning the IMPACT World Tag Team titles.. but @HEATHXXII accidentally did it for him! #IMPACTonAXSTV pic.twitter.com/TEmGcyxGQW

Eddie Edwards comes in and attempts to distract Alexander and Swann. Alexander blocked a CLimax from Taven. Maria then grabbed the ref as a distraction which allowed Edwards to hit Alexander with a Kendo Stick shot to the head. Heath then ran in and this pandemonium caused a DQ to end the match.

The OGK, Maria and Edwards posed on the ramp while Alexander, Swann and Heath wanted them back in the ring.

Zicky Dice and Johnny Swinger delivered a pizza to Jordynne Grace backstage. Grace’s locker room wall was covered with pictures of Grace with “Masha’s going to kill you” painted over them.Dice and Swinger also delivered a photo of Max The Impaler to Grace. Grace said Max is her opponent for Victory Road. Grace promised to kill Dice next week.

Heath apologized to Alexander and Swann backstage for costing them the Tag titles. Scott D’Amore booked Alexander, Swann, and Heath vs. Edwards, Bennett, and Taven for Victory Road.

Another almost squash match. This match saw back and forth pinning combos. Hyan hit a legdrop but Mickie came back with kicks and a top rope Lou Thesz Press. Mickey hit her Mick-OT for the win.

Gisele Shaw came out ringside after the match and said that Mickie is delaying the inevitable (retirement) while still trying to maintain the spotlight. Shaw then challenged Mickie for Victory Road.

A PCO promo aired that was very spooky

MCMG got some tandem offense in on Gallows, then Gallows and Anderson cut Shelley off. Shelley avoided a double team attack in the corner and was able to tag in Sabin. Sabin hit a high cross for a near fall on Anderson. MCMG hit stereo baseball slides and planchas as we went to commercial.

MCMG were working Anderson in their corner effectively cutting the ring in half. TMCMG both hit Dragon Screws then SHelley locked in a Figure Four on Anderson. Sabin then hit his own Figure Four for good measure.

After sometime, Gallows and Sabin got hot tags and squared off in the middle of the ring with one another. Gallows was getting the upper hand and using his brute strength as he crushed Sabin with powerful punches. Sabin eventually blocked a Magic Killer but Gallows hit a double Suplex to both members of MCMG. Shortly after, all four men were in the ring and Shelley missed a oduble stomp, Sabin hit a missle dropkick on Anderson though. Anderson hit a Stun Gun on Sabin but the pin attempt was saved by Sabin. Good brothers hit a neckbreaker on Sabin.

All four men were once again in the ring and eventually, Shelley and Sabin sent Gallows outside then hit a Skull and Bones on Anderson for the WIN!

After the match, the two teams hugged and too sweeted each other to end the show.

Next week on Impact Wrestling

This episode was quite fun with two book ends of great matches. Mike Bailey should be on many people’s Best Male Wrestler ballot while we get a dream match of sorts as the Motor City Machine Guns finally take on the Good Brothers. All in all, with a build up of two shows happening, Impact is focused on easy story telling with good in-ring which is a win.