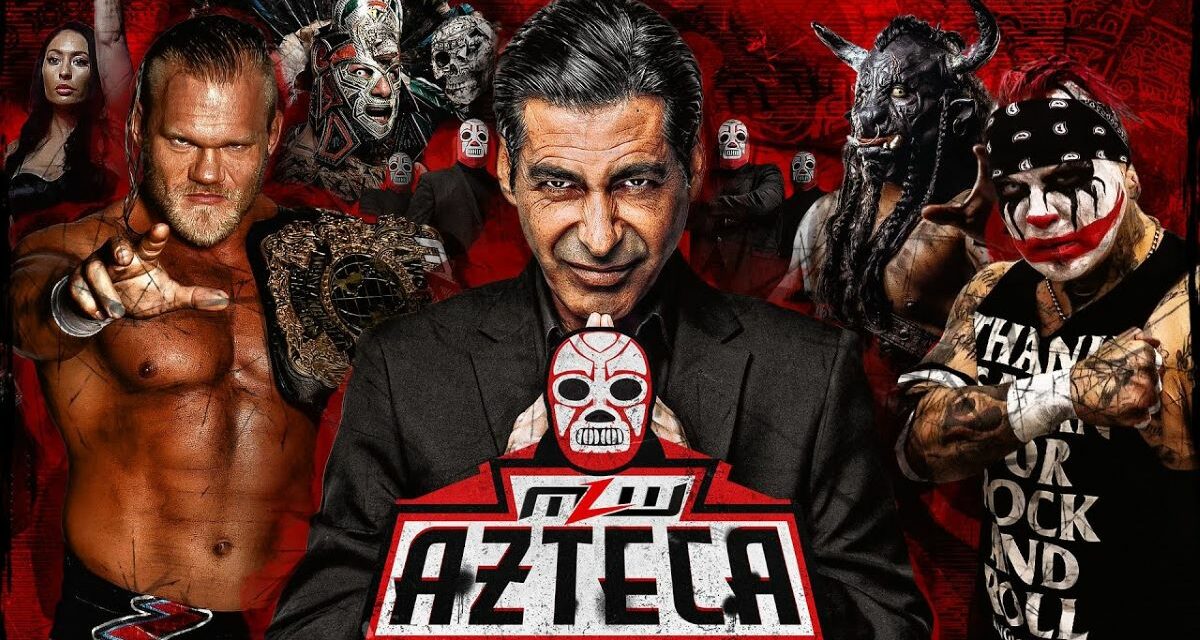 Welcome back to Major League Wrestling, where we head south to America’s heartland:  Mexico.  MLW partners up with The Crash promotion to showcase the wrestling with the lucha libre.  Of course, since the show is run by “El Jefe” Cesar Duran, so expect violence.  Lots of it.

We head to the Auditorio Fausto Gutierrez Moreno in Tijuana, Baja California.  Rich Bocchini and Joe Dombrowski have the call in Tijuana, and Duran comes out to greet the fans.  He promises the usual of violence, and wants the fans to chant for “Lucha!”  So let’s get to La Primera Batalla (as they say in my native tongue), and it’s a…

If this is your first time seeing wrestling in Mexico, this is the quick primer:  Tag matches are fairly loose affairs with tons of high spots.  In short, it is Jim Cornette’s worst nightmare.

As for the action in the ring, it’s spotty in a lot of areas, and that isn’t a compliment.  The timing feels off, and there’s not a lot to sink my teeth into, as the action is just all over the ring, and outside.  But the technicos (babyfaces) Aramis and Mysteziz Jr. hit stereo tope suicidas.

They follow that in the ring with stereo 450 splashes to Dinamico and Black Danger, but the rudos (heels) kick out at the two count.  At one point, Aramis is up top, and Danger tries a German suplex, but Aramis lands on his two feet, and wags his finger at the silly rudo.  We get to a familiar sight, and Aramis faces his rival Arez, and the end comes as Aramis gets Arez Desnucadora de Muscatero for the pin.

Your Winners via Pinfall:   Aramis, Destiny and Myzteziz Jr.

We also head to break news that stated the MLW World Heavyweight champion, Hammerstone signed a multi-year deal with MLW.  This looks promising for the company in the years to come.

We also get a recap of the five way ladder match for Alex Kane to earn the then vacant MLW Openweight belt.  This led to him and Mr. Thomas (now no longer Not King Mo ™) to begin the foundation of the Bomaye Fight Club, and the burgeoning feud with Calvin Tankman.  Tankman attacked Kane and Thomas as they exited their car, and Tankman got sent to jail for a “carjacking.”

Atout is backstage with Kane and Mr. Thomas, and Kane says Tankman crossed the line. Kane says that he isn’t afraid, and that “Crybaby Calvin” is out on bail, and he will get choked out in the future if Tankman comes near him again.

Next week with be Kane versus Aerostar for the MLW Openweight belt.  If you haven’t seen Aerostar since the days of Lucha Underground, then this will be a treat.

Speaking of which, we head to a mysterious place (or it could the dark end of Senor Frog’s in Tijuana…either way…), as Karli Perez and Cesar Duran ponder on a mini Aztec sun calendar, and discuss what consequences were to happen if it’s power were to be unleashed. But soon, King Muertes comes in the picture, and Duran mentions Hammerstone and Pagano are his opponents tonight, and he promises a “mythical beast” to fight alongside him.

TONIGHT! It's King Muertes and Taurus vs Pagano and Alex Hammerstone in an Apocalypto match!#MLWAzteca

Ahh, Cesar Duran, you ham hock of a matchmaker.  I love it when he implicates (broadly) big things will happen tonight.  No subtlety there.

While we’re on the subject of subtlety, here is the next match that has none of those qualities…

Atout comes out with Holliday, and wants to spend time at commentary.  Before I can wonder what in the name of Miss Elizabeth and Macho Man Randy Savage is going on (much like commentary asking Atout what her deal is with Holliday for the better part of the match), Psycho Clown is taking it to Holliday with a scoop powerslam for two.

.@MostMarketable With a Torture rack into a neckbreaker!

Meanwhile, Bocchini and Dombrowski ask about Atout’s work trying to uncover Duran’s business dealings, and she says that anytime someone pokes into his affairs, they just disappear. As Holliday goes up to the top turnbuckle, the Aztec Stooge ™ comes out and takes Atout away.  With Holliday distracted, Psycho Clown takes advantage with a Spanish Fly for the three count.

Your Winner via Pinfall:  Psycho Clown

Time for a 5150 Warning, as the MLW tag team champions Slice Boogie and Rivera have a message for Von Erichs. They don’t want them to disrespect Konnan again, and they’re gonna keep the belts. 5150 defend the belts next week in action.

A quick vignette to let the fans know that Bestia 666 is coming soon.  Hope it doesn’t conflict with his tag team champion duties in the NWA.

We head to Kauai with the Von Erichs, and papa Kevin is coaching the boys. He tells them to huddle up, and prepare for Dallas. Ross and Marshall want the tag belts back, and they aren’t keen with the disrespectful attitude. Kevin agrees, but Papa Von Erich advises the boys not to wrestle their style, but make ‘em wrestle yours.

Richard Holliday goes to Duran who’s with some guy, asking where Atout is.  Duran assures him she’s safe, but says he’s here with Detective Ontiveros from the Tijuana police department about a nightclub fracas. As he’s hauled away, Holliday starts to say to Duran that he’ll heard from his lawyer/father…but halts and says he’ll hear from him. Duran chuckles, and tells the Azteca Stooge ™ to advise Karli that plans are in motion.

.@MostMarketable has just been taken into custody.

But now we head to the Main Event of the night, and it is your…

As much as I hoped for a sacrifice on a stone slab to the Aztecan gods… nope; this is a straight up street fight with a fancier name.  Start of the match has Pagano and Taurus work in the ring, while Your Boy Hammer and Muertes brawl outside.   Taurus overpowers and covers Pagano, but gets a two count.  Back in, Hammer takes a chair to Taurus, and now Muertes and Hammer face off in the ring and pummel away.  Hammerstone delivers with a psycho knee to Muertes to cover for a count of two.  Muertes answers with a scoop powerslam. Pagano gets into the fray, but Taurus comes in and slam a blue metal lid to Pagano’s cranium.

Things start to get more intense with the Tijuana crowd, as Taurus spears Pagano to guardrails and the action spills into the front row.  All four men keep brawling in the front row for a few minutes, Taurus starts choking Hammerstone with cable cords.  The Apocalypto goes everywhere, as Muertes hits a suplex to Pagano on stage, and Your Boy Hammer nails Taurus with a bicycle kick.

.@kingmilmuertes suplexes @Pagano656 onto the stage!

Back in the ring, Hammerstone is sent to corner going headfirst to a propped chair, and it goes to…

Ads (Have I mentioned how much I love it when a match cuts away to a bloody ad, just as things start to get interesting in the ring?  No?  Can you feel the sarcasm dripping from the screen?  Yes?  Good to know.  Thanks for playing.)

We come back to see Muertes and Taurus are in control, and ramping up the violence further.  But it’s Hammerstone that gets Muertes up, and then he delivers a burning hammer to a heavy plastic garbage can.

.@alexhammerstone With a burning hammer onto the garbage bin!

He covers Muertes for a two count.  Now we get a wooden board propped in the corner, and Taurus send the MLW champ to the corner, but Hammerstone pumps the brakes.  Taurus rushes, but Hammerstone backdrops the charging bull to the board, splintering it to pieces.  Pagano gets back in the ring, slams a chair to Muertes’ head, and he and Your Boy Hammer work together and hit a Doomsday Device.   Taurus put a stop to that team up, but Pagano and Hammerstone team for power bomb and then a tope con giro by Pagano to Taurus on the outside.

As Pagano ramps up the violence outside with a Death Valley Driver to Taurus on the concrete, Muertes gets with a lungblower to Hammerstone to cover for another two count.  But the night belongs to Your Boy Hammer, as he gets the Nightmare Pendulum to Muertes for the one, two, and three!

Your Winners via Pinfall:  Hammerstone and Pagano

As they celebrate in the ring, Cesar Duran comes out, and gestures the thumb to his throat. Hammer is perplexed, but then Pagano turns on Your Boy Hammer.  Pretty soon, Taurus, Muertes, and Pagano all stomp down on the MLW Heavyweight champ.  As Duran gets the last laugh, Aztec Stooges ™ come out and carry off Hammer to the back, as the show fades to the Tijuana city.

The first night seeing the pairing of The Crash and MLW doesn’t seem to mesh well, especially the first trios match.  I am intrigued by the angle they’re going with Richard Holliday and Hammerstone, and that’s why I didn’t lower the rating further.

For everyone else, if this made you reminisce about the good old days of Lucha Underground, consider your itch scratched.