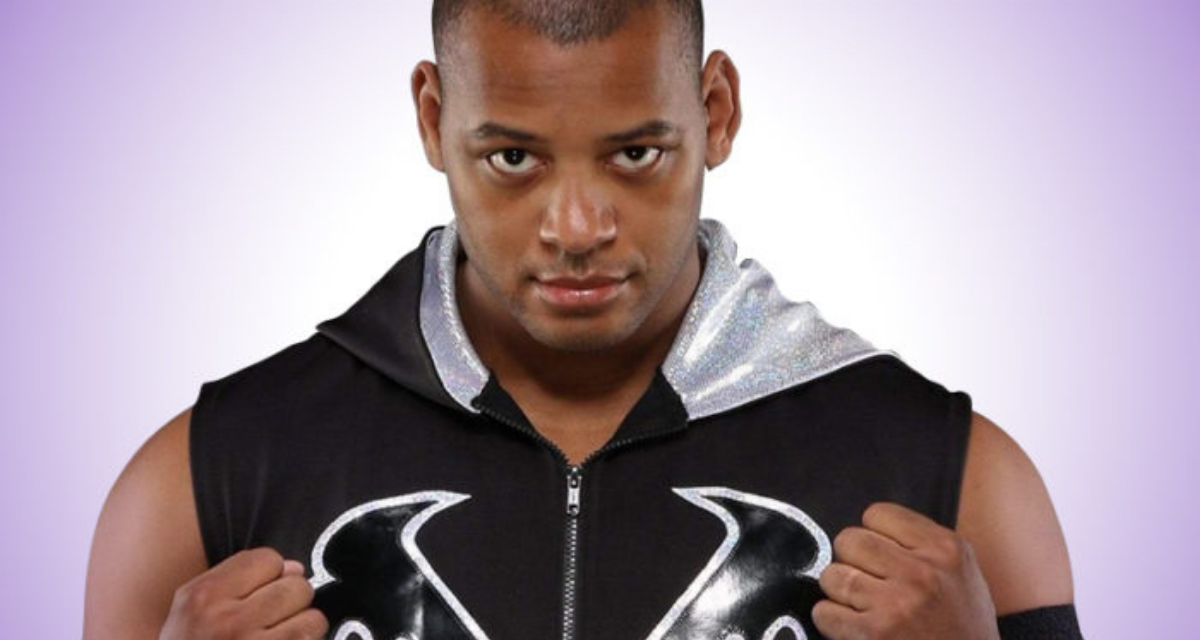 Fresh off the first-ever taping of the NWA USA show for YouTube, it wouldn’t be out of line to say that there’s a rocket strapped to the back of Marshe’ “All Day” Rockett.

The 6-foot-4, 275-pounder from Chicago was a featured player for the multiple shows that were recorded … and then followed up with being a part of numerous NWA Powerrr storylines.

Backstage at the Georgia Public Broadcasting center in Atlanta, where the NWA was shooting four days of television, December 3-6, the 36-year-old Rockett was contemplative of the road that got him to the spot, the many hurdles along the way.

“It’s always good to have somebody backing you up,” Rockett told SlamWrestling.net. “Because we all started here, believing in ourselves, but it’s more rewarding when other people start to see and envision the same dream and goals that you have.”

Without giving away the plan for Rockett, let’s just say that he faces some big names and is associated with some of the top competitors in the NWA, as part of The Church’s Money/Idolmania Sports Management faction.

“Last night definitely was a huge eye opener, and something I’m extremely grateful for,” he said on December 4th, though the first episode of NWA USA won’t air until January 8th. “Just being here in the NWA is truly an honor. So much wrestling tradition.” 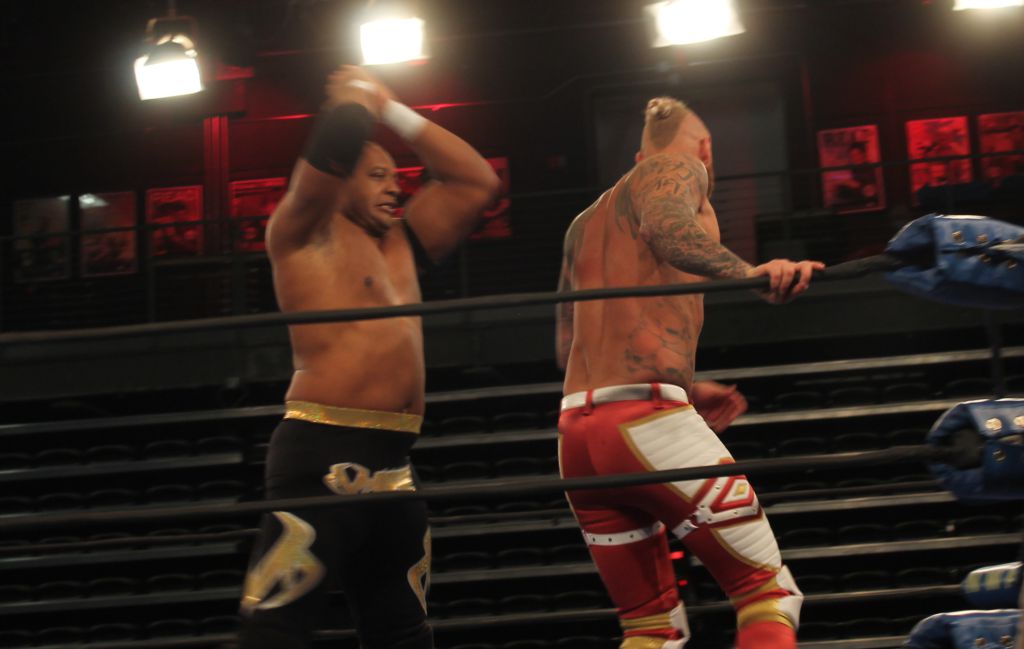 Rockett was surrounded by some legendary names, like Ricky Morton of the Rock’n’Roll Express, Madusa, George South, and Raven, and was all ears.

“There is just years of monumental experience that you can learn from and then to grow,” he said. “We’re getting the opportunity to wrestle and work with some of the best minds in the business. Last night was like the combination of that and only going up from there.”

He loves the studio wrestling aspect of the NWA, smaller crowds that he can truly interact with, get upset, and verbally spar with. “A lot of fans are turning their heads, and they’re coming over to our side. And it’s cool to see certain things Monday, Wednesday nights and all that, but, when you can also see something cool and unique in studio wrestling for that younger generation, I think that speaks volumes for them wanting to now turn their vision over to ours,” he said, praising NWA owner Billy Corgan as a “creative genius.”

With the push in the NWA under way, reflection is in order for Rockett.

Born in Normal, Illinois, he grew up “normal” in Chicago and its suburbs. “Growing up was pretty much a typical childhood. Couple of siblings, mom and dad, hardworking, very, very tight-knit family,” he recalled.

Wrestling did not dominate his early years. “You hear, ‘When did you start liking wrestling?’ ‘Oh, I was three,’ or ‘It was in my Mama’s womb,’ or something like that. I was like 10 or 12. I just joke and say that I was a late bloomer,” Rockett said. “I came around the time of the Monday Night Wars. I was just so huge into that, seeing what side was going to win and what they were going to do next to try to keep fans coming in.”

While the tall Rockett did play some basketball in high school, he excelled on the track. “Hurdles was always my specialty. As I’m sure many people when they see the height level that when I kick an opponent, that’s when that’s coming from — that’s hurdle training,” he said.

After high school, he tried acting and theater. It was his father who suggested maybe he revisit that wrestling obsession. “He was like, ‘Well, if you want to do something in entertainment, you’re all about this wrestling more than anything I can see, strongly passionately about.’ So I set up there and doing some research, found the school of Windy City Pro Wrestling.”

Sam DeCero was the promoter of Windy City, and the learning tree he established out of Chicago is deep, with names he trained or used on shows such as Christopher Daniels, Ace Steel and Colt Cabana.

Rockett praised DeCero. “He brought me into the fold. And underneath his tutelage and all of the trainers, and I got trained there, got to meet a lot of great minds from there. And I’m eternally grateful for his training, because I think that really laid the groundwork for how I am as a person and as a performer today.” Other trainers included Steve Boz, Hunter Paine, Austin Roberts, and Acid Ajaz.

Wrestling brought him come out of his shell. “It’s also helped me grow as a human being, because I used to be a shy kid but this has made me more outgoing and just put myself out there more and give me an extreme amount of confidence and just helped me grow into an all-out entertainer, performer, whatever you want to tag it.”

Debuting in 2005, Rockett’s early years were around the Midwest, appearing for the likes of CHIKARA, IWA Mid-South, EVOLVE, DREAMWAVE Wrestling and Resistance Pro. His big break came in March 2016, when he was signed by Impact Wrestling. Though never a regularly featured player, Rockett was a part of the X Division, and appeared here and there on Impact programming.

He left Impact with class, tweeting on November 1, 2017: “Today is a new day and a new chapter. Thank you @IMPACTWRESTLING for everything. Until we meet again!”

“That was a tremendous experience. Some of the first highlights of me being seen and around the world and on television and everything,” Rockett said about his Impact days.

Rockett elaborated. “He uses his catchphrase, ‘Damn,’ it just goes right into like, ‘You’ve got something special, kid, and you just keep going.’ One of the things he said to me that I even believe now is, if you stay humble, and you stay hungry, you can go many places that you could never dream of. I really take that to heart. With me, there’s no big ego. … Here I am in NWA, from Impact, and still killing it. So I just hope to continue that.”

Rockett’s manager (just don’t call him that) in the NWA is BLK Jeez (Darnell Kittrell). He truly believes in Rockett’s future, tipping off a bit of the goals for them in the NWA.

“Look how big he is, and for somebody that size to be as athletic as he is, as intense as he is, that’s a champion right there. So, the way I look at it is, Marshe’ should be the next in line for the National heavyweight title, you know what I’m saying?” said BLK Jeez, a veteran wrestler himself. “It’s a marathon, not a race. So Marshe’ picks up that National heavyweight title, then he goes on to the 10 Pounds of Gold, you know what I’m saying? With me in his corner, with Idolmania Sports Management in his corner, sky’s the limit for Marshe’ Rockett.”

As much potential as there is, Rockett remains grounded with a solid home life.

He and his wife of 11 years have two sons, now five and one. “They drive me crazy when Daddy’s home, because they’re all into the wrestling too. They want to wrestle — I don’t even set my alarm anymore because I’m just getting slapped and jumped on,” he laughed, admitting that getting to stay in a hotel for a few nights in Atlanta was a blessing. “This is my break. This is my time to just decompress.” 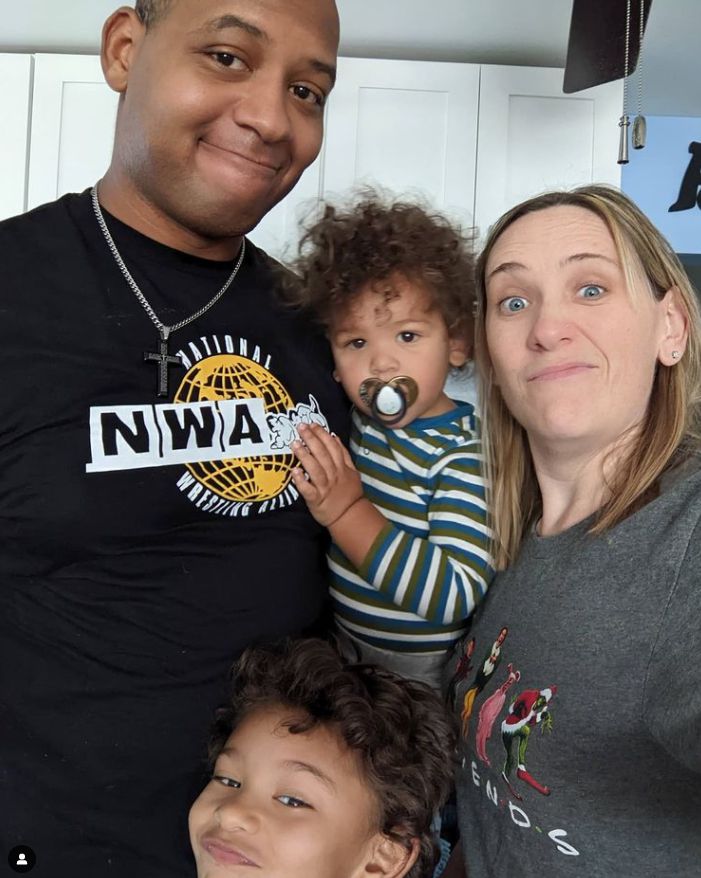 Rockett disagreed with the idea that you have to be either/or with fame or family. “I’ve been really, really blessed and lucky, that I’ve been able to have both, to be able to do this and to not sacrifice so much time with my family. But it’s also having a great support system really, really helps. So my wife, my wife is everything. Without her there probably be no way to keep me up doing this. So while I’m away, I know that my boys are taken care of. And it’s all because of her.”

Both Rockett and his wife work in special education.

Rockett shared about his contribution to society. He works with special needs high school students, who are about to transition into the so-called real world. “We basically help try to train them for life after,” he explained, whether that means living in a group home or living on their own. “What we basically do is just try to give them vocational skills and life skills that they can help better prepare and take care of themselves. I just love it.”

There is a totally different reward to his day job than performing in the ring.

“They’re teaching me more than I’m teaching them,” he said. “When you actually see what other individuals go through on a daily basis, it really just puts a lot of things in perspective. You might be upset, ‘Oh, I’ve got to do this today, I got to do this, and I really don’t want to do this.’ But honestly, my stuff is miniscule and small compared to what they have to constantly go through and battle. Some of them are really huge wrestling fans, which is why I’m one of the most popular teachers there.”

As Marshe’ “All Day” Rockett, though, he has to keep some of the details quiet about the plans the NWA has for him, already taped and waiting to air. “That’s half the fun. It’s like Christmas, you build for 24 days, and then once the big day arrives, it’s like, ‘Yeah, that’s what I’ve been waiting for,'” he chuckled.