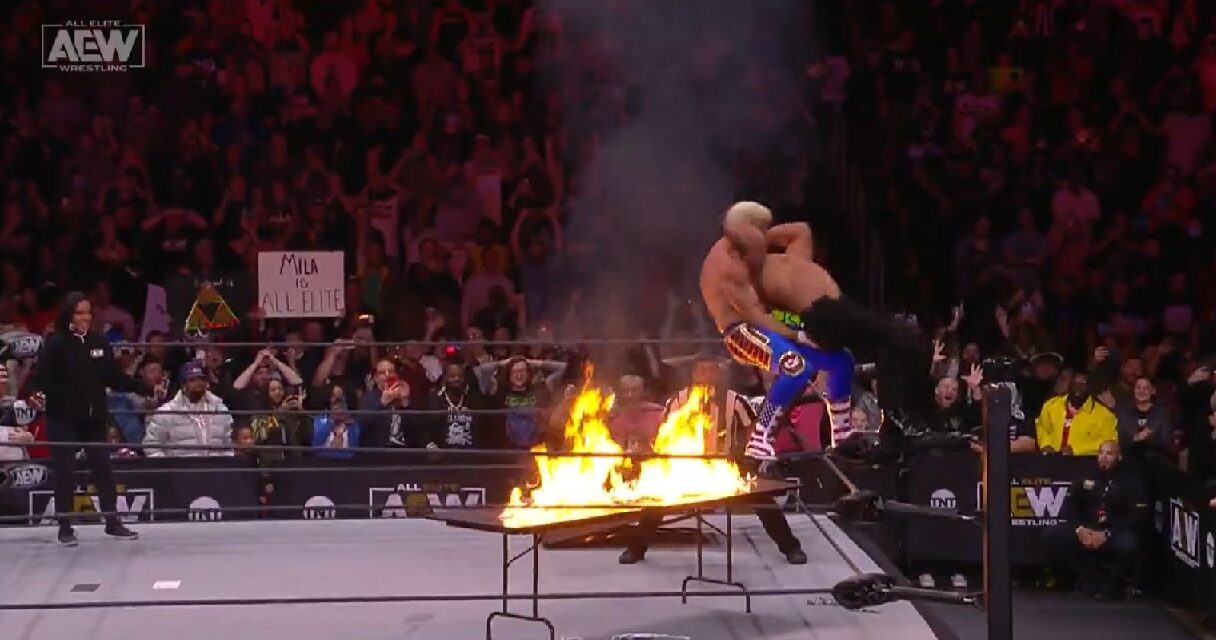 Perception is a funny thing. Take Bryan Danielson, for instance. When he was playing to the crowd, AEW fans couldn’t wait for him to kick people in the face. Now? Well, since he’s turned his back on the masses, everyone thinks he’s a big meanie for wanting to kick all the lovable scamps from the Dark Order in their own hometowns. And he is. A big meanie, I mean. Nevertheless, he’s one of the very best to ever do it between the ropes, so we should look forward to him taking on Alan Angels tonight, live on TNT. Let’s check it out.

As Excalibur and Tony Schiavone wish Jim Ross his best in his battle with skin cancer (and we do here at SLAM Wrestling as well), they won’t have to worry about an empty seat at the announce table, as Hangman Adam Page joins them on commentary.

Funny, but heel Danielson raises both arms after a good mood like he wants to solicit a reaction even more than face Danielson does. He’s also not at all above flexing and showing off as he systematically takes Angels apart (after some offense from 5, granted), winning with a kneebar.

Schiavone gets in the ring to talk to Danielson, who scoffs at the idea that Angels was the best that Atlanta has to offer. He also claims he tore Angels’ MCL, so maybe his quirk is x-ray vision? The American Dragon is looking forward to taking Page’s world championship in two weeks that it’s not “Cowboy S–t,” it’s “Coward S–t.” John Silver reminds a fed up Page that he isn’t allowed to touch Danielson tonight … but John can. Alas, that doesn’t go well, and despite some urging from the champ, Danielson won’t be goaded into a physical exchange either.

Miro is lost in whitespace. The Redeemer says he is ready to storm the gates of Heaven to … confront God? Remember when Vince McMahon did that?

Since Page is now gone, there’s room for another guest commentator, and MJF is happy to take that seat — much happier than Excalibur and Schiavone are to see him. MJF’s plan of attack tonight is to ridicule Punk for looking old and haggard, doubting he still has his fastball since Moriarity is giving him a hard time. “You’re a terrible person,” an exasperated Schiavone finally exclaims. Moriarity does well enough to lend some credibility to the thought that he could pull off the upset, but it would be silly for Punk to lose here, and he does not, eventually striking with the GTS.

MJF isn’t about to depart before giving Punk the business again, mocking his performance and suggesting that the only thing he’s good at now is “trying to get in Britt Baker’s pants.” After some back and forth, MJF says in Long Island, he’ll be among fans who appreciate him and will be more over than any of the legends of pro wrestling were in their respective hometowns. He also starts in on Punk’s dog, which crosses a line for sure. Punk pursues him up the ramp but is cut off by Wardlow, and angry stares ensue.

In the back, Schiavone talks to a still-upset Baker, who can’t believe what Tony Khan did to her last week. She and Team DMD say they are back on track, and that Jamie Hayter will take apart Riho next week so she never gets near a title shot.

Next up at the announce table is Adam Cole, who says the show just got a lot better. Orange Cassidy also heads over, and the two men immediately face off. The Young Bucks try to sneak up from behind, but Orange turns to face them and is dropped by a low blow from Cole. The Jacksons do their own impression of Cassidy’s kicks and blast him with a double superkick. But they soon head for the hills when Chuck Taylor and Wheeler Yuta show up wielding chairs.

Tony Nese doesn’t believe Sammy Guevara deserves to be TNT champion, and he plans on removing that title from the Spanish God Friday on Rampage.

Oh dear, this is unfortunate for you, Mr. Adams. Well, Jack Crosby will enjoy this, anyway. It doesn’t take Wardlow long to win, that’s for sure.

Is Pac ready to wrestle Friday night with one eye damaged? He says he is good to go, teaming with Penta Friday to take on FTR.

Allin showing some solidarity with his partner tonight as he has his whole face painted. Meanwhile, Taz has joined the announcers and all of them remind us the Gunn Club is undefeated and quickly climbing the tag team rankings. Surely they aren’t winning this, though, right? It’s always fun in the latter stages of Sting’s career to see him get the hot tag and do his greatest hits, though they get interrupted here. The faces shake off interference from Austin Gunn, and the Icon scores the pinfall in the end.

Alex Marvez gets some thoughts from Chris Jericho, who clarifies that he didn’t come to Eddie Kingston’s aid, he simply wanted to take out 2.0. They show up looking for immediate revenge, however, attacking Le Champion and bouncing him off the ubiquitous metal roll-up door. Doesn’t Jericho have a whole stable to watch his back? Where was everybody?

Since Team Taz is still at the announce position, Lio Rush comes out to pick a bone with them. It doesn’t accomplish much except for Rush to claim he will fight for the Dynamite Diamond Ring. Meanwhile, Thunder Rosa is going to take Jericho’s commentary spot on Rampage and will be calling Jade Cargill’s match, undoubtedly looking to play some mind games.

This tourney feels like it is taking forever to unfold, as I was sure this was already a semfinal, but no. Winner gets Nyla Rose, who is getting more of a push again as of late, so this may be for naught. The question early on is whether the wrestlers are showing each other too much respect, with Soho passing up a chance to strike with a closed fist and plenty of skill over physicality moves. Statlander scores some very close near falls, and Soho rallies back, but she, too, can’t quite get the three. Statlander goes for the Big Bang Theory, but Soho rolls her up and finally brings this to a close.

Vickie Guerrero confronts Statlander on the ramp after the bell, giving Rose a chance to ambush Soho. As one does.

There are about 20 minutes left for the main event, which means we should see a good one here. Andrade isn’t waiting for the bell, throwing hands at Rhodes on the ramp to get this off and running. He’s also dressed too nicely for this; someone needs to tell him jeans are the usual dress code for a street fight. Fans are split about 50/50, with some cheering and some booing Rhodes, even in his hometown. Plenty of weapons come into play, though Andrade seems unwilling to give the fans the satisfaction of using a table. Big props to Andrade for sneaking some aerial moves into this hardcore bout, a tactic always worthy of respect. A chair shot busts open the American Nightmare, and is there a better bleeder in the business right now than Rhodes? Is that even a thing? Cody finds a golden shovel beneath the ring, which he uses to ward off a taser shot from Jose (who is surprisingly jacked!), right before El Idolo comes flying from the ring to the floor. The fans get the “AEW” chants going after that. They also still want tables, and several are all of a sudden in play when a hooded figure enters the ring with lighter fluid. It’s Brandi Rhodes, who lights the table on fire for her husband to superplex Andrade through it and end this one.

Plenty of fire puns come to mind, but since the main eventers are still smoldering, I’ll let them go for now. See you in seven!

Nothing like a flaming table to liven up an otherwise so-so show. No, seriously, there really is nothing like it. This broadcast felt a little disjointed, with too many guest commentators and some lulls in the ring. That said, Bryan vs. Page is waiting not far away and is no less intriguing as time goes on, so that’s a good thing.