By DON LUCE – For SLAM! Wrestling

Charley Fox, who is a 2019 Pro Wrestling Hall of Fame inductee for some reason, was a little known journeyman wrestler from Cleveland, Ohio. His professional career seemed to run from 1911 thought 1938.

His reputation seemed to change when his son, Richard M. Fox, wrote a book, When Professional Wrestling Was a Sport: A Memoir of Charley Fox Cleveland’s Wrestling Cop, released in 2011.

Anyone who reads the book with little knowledge of wrestling’s past might think that Charley Fox was the second coming of Frank Gotch or Lou Thesz. 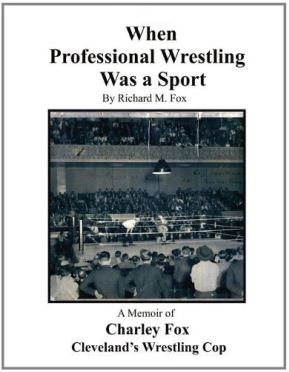 Don’t get me wrong, the book is an interesting read. His son found an old scrapbook with clippings of his father’s career as a pro grappler. The clips tell of Fox’s journey, and the corresponding era.

However Richard M. Fox made no effort to tell if the clips were real or just some ballyhoo made up by promoters to build up future matches; a more recent example would be taking any of the Apter mags quotes from the wrestlers in the 1980s as true quotes. As any mat historian knows, much information needs to be researched.

The biggest blunder is found in the fifth chapter, titled “Light-Heavyweight champion.” He found a clipping telling of Charley Fox winning the world’s light-heavyweight title from Hugh Nichols in Dallas in July 1926. Richard Fox goes on saying that he can not find where his dad lost the title. He guesses that Charley Fox got too heavy for the weight class and had to give up his championship.

It is too bad that Richard never checked a Dallas newspaper. The Dallas Morning News gives a rundown of Charley’s mat doings in that city.

Fox defeated Joe Shimkus on June 2, 1926, to win Dallas’ local Eastern and Southern light-heavyweight titles. He continued as champion until August 19, 1926, when Harry Mammos relieved him of the local titles. Fox then left Dallas for good.

The clip is correct in one way. Charley Fox did defeat Hugh Nichols on July 29, 1926, in a two-of-three fall match at Dallas. However Hugh Nichols was not the world light-heavyweight champion at that time.

Clarence Eklund was the world title holder in that division. If only Richard had done some more quality research.

There is another clip of Charley Fox being billed as the world middleweight champion earlier while working the carnival circuit. Possible, but no research ever mentions Charley Fox as king of the middleweights.

The book notes that Rudy Dusek and Fox split victories over the years. In nine matches that I found, Rudy won eight with one no contest. Possibly the clip of Fox winning was just made up.

As for the rest of the book, when Richard Fox is writing about his father’s post-wrestling life as a police officer, it is good, and, let’s assume, accurate.

Charley Fox may have been a very good wrestler in the lighter divisions, but nobody is alive to say for sure. I just can’t see how he is a legitimate Pro Wrestling Hall of Famer from that era.

The Pro Wrestling Hall of Fame inductions take place May 16-18th, 2019, in Wichita Falls, Texas. Charley Fox’s family are expected to be in attendance for his induction, along with living inductees Ronnie Garvin, Abdullah the Butcher, Bob Roop and Randy Rose of the Midnight Express. For more, see the PWHF website.

Don Luce was the 2018 recipient of the James Melby Award from the Cauliflower Alley Club for his contributions to chronicling professional wrestling journalism. He was profiled vby Jon Langmead: Don Luce the ‘godfather’ of pro wrestling research.