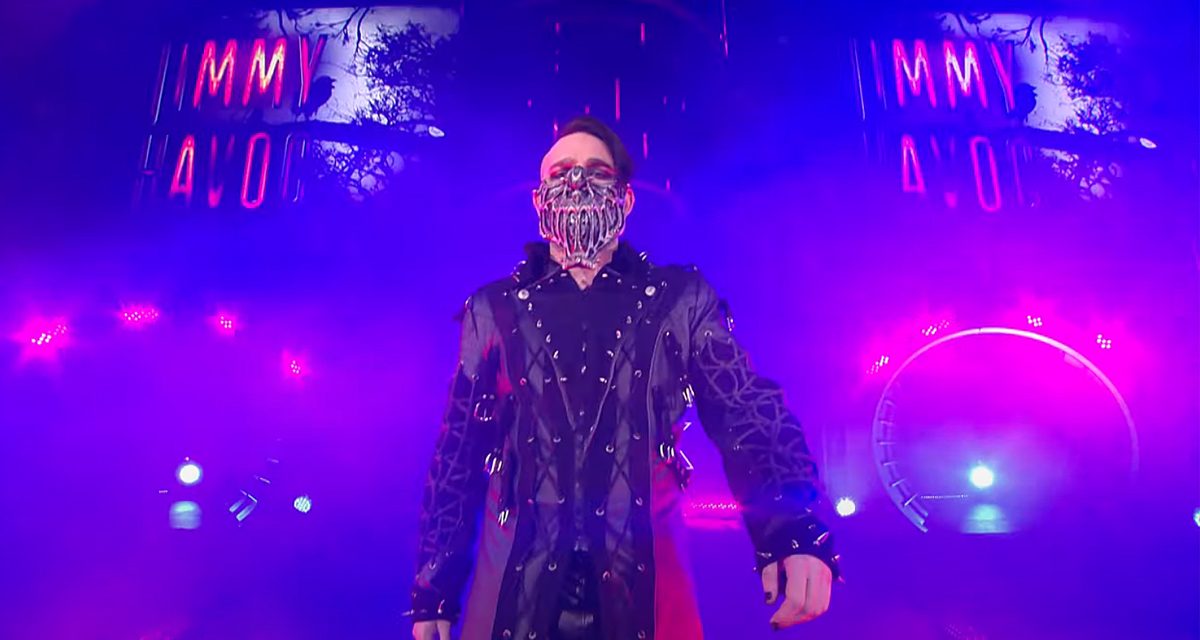 It’s safe to say that the Bucket List for British wrestling star Jimmy Havoc is a little different than your average wrestler. Sure, he checked off wrestling in a WWE ring as a part of WrestleMania weekend, through a tie-in with Progress Wrestling, but what about the CZW Tournament of Death? How many would have that next to be checked off?

Havoc will indeed check that off his To Do List in June, competing in his first CZW Tournament of Death in Philadelphia.

“The only thing I don’t want to do is die in the ring, so as long as I eschew that, then the dream has been achieved,” Havoc told SLAM! Wrestling during a recent SMASH Wrestling show in Toronto at the Phoenix Concert Theatre.

It’s also safe to say that Havoc is not your typical pro wrestling monster. 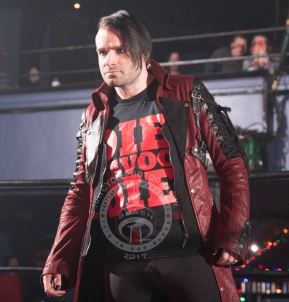 Jimmy Havoc heads to the ring for his bout with Tyson Dux at SMASH Wrestling in Toronto. Photos by Joe Hrycych, hrycychphotography.com

At 5-foot-10, and 169 pounds, with his half-shaved head and violent tendencies, Havoc marches to a decidedly different beat than many. The 33-year-old grappler, born James McAhren in Kent, England, didn’t start with a background as a football player or amateur wrestler.

“I’ve never had a goal in wrestling. I started wrestling because I was a fan and I just wanted to give it a go,” recalled Havoc, who trained at NWA UK Hammerlock under Andre Baker and Jon Ryan, and debuted in 2004. “So when I first had a match, I thought, ‘Wow, this is f—ing amazing.’ The first time I was a main event it was amazing. The first time I got to do a hardcore match was amazing. After all, I’ve come farther than I’ve ever imagined I would ever go.”

Others that were around when he was training include indy darling and EVOLVE champion Zack Sabre Jr., and Fergal Devitt, who is now back on WWE TV as Finn Balor.

He insists there is no grudge against his colleagues who have gone further than he has.

“I can’t speak for everyone, I can speak for myself, if one of my friends does well I’m really pleased for him. For me personally, there’s no point me getting jealous of other people, because that just upsets me,” he said.

Instead, Havoc and his countrymen are enjoying a resurgence of sorts. Balor was the first WWE Universal champion, Marty Scurll is ROH TV champ, as was Will Ospreay, Jack Gallagher is one of the most memorable of the WWE’s lightheavyweights, with Neville being the standard-bearer.

The United Kingdom stands tall on the current wrestling scene, and Havoc is a part of that.

“It does feel good. It feels like it’s been a long time coming. It feels like there’s a long where people like me, Zack, Marty, we were people who were putting on really good shows back home but there was no one around the world who was watching, who cared,” mused Havoc. “The British scene was basically fly a bunch of American guys in, fly a bunch of Japanese guys in, they’re the ones that sell the tickets. But then we’re the ones who are going to be putting on regularly all the good matches, who the people are going to come back and see. And when people like Zack and Marty managed to get over there to PWG and Zack over there in Japan and stuff, that’s when people started looking at the British scene. And when people started watching the British scene, the whole world has gone, ‘F—, okay, this stuff’s actually really, really good, and the product as a whole is incredible.’ It’s not just somewhere Americans get flown every once in a while to do some stuff.”

In fact, now it’s the opposite, where Havoc will get flown to North America for bouts, including his violent loss to SMASH champion Tyson Dux at the beginning of April, a match that included a cheese grater, chairs, thumbtacks, and a cringe-worthy moment where Havoc appeared to slice Dux’s skin between his fingers and then pour lemon juice on it. 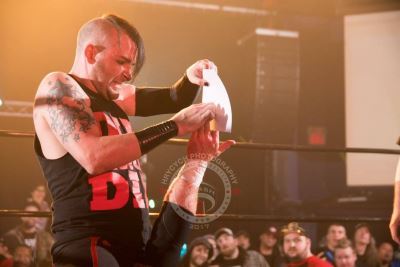 Speaking before his bout with Dux, Havoc said that he enjoys the challenge of different opponents. “I love working new people. It got to a point back home a few years ago where it was just all the same guys working each other over and over again. So it’s nice to branch out and getting to do all these different things.”

He also had a short run in TNA Wrestling in early 2016, primarily battling with the Decay faction of Abyss, Crazzy Steve and Rosemary.

WrestleMania weekend in Orlando, Florida, was an eye-opening experience for Havoc and his compatriots. He tried to put in perspective what it was like competing that weekend with an imported product.

“For us, personally, we’re still of the opinion of, as much as people say they watch us, we don’t know really how many people watch what we do. I know I’ve got a lot of followers on Twitter and stuff, but that doesn’t necessarily translate to people who follow the product,” he said. “So for British companies, and especially this year, there was Progress, RevPro, What Culture, all these British companies going over to America to do shows all for the first time in America. I felt like, okay this could either be really good for us or it could all fall on its ass and it could be really bad for us. Luckily it turned out really good for us. I think all of the British shows drew really well, they got really good receptions, but it was still until my music hit and I walked out there and I heard the cheer that went on when my music hit, I didn’t really, I would never have comprehended that that many people in another country would know who I was, kind of thing. So I think we got over 1,500 people in the Progress show, that’s one and a half thousand people in a foreign country.”

It was recently announced that the iconic wrestling show World of Sports would be returning to British television. Havoc is intrigued, but not sure if he’ll be a part of it.

“It’s something that us as British wrestlers growing up, if we didn’t watch it, we were taught all about that, at wrestling school. It’s incredible, and it’s only a good thing for our scene,” Havoc said. “People are, ‘Are you jealous that you’re not on it?’ No! Because, one, I’m pretty sure that Jimmy Havoc on primetime terrestrial television is probably not a good idea anyway, you know? But that sort of thing only helps the business as a whole. If more people are watching that, become a fan of those guys, they’re going to see those guys on other shows around the country, and think, ‘I’m going to go and watch it.’ So that brings the business up as a whole.”

So while he may not be mainstream, he’s quite content to be Jimmy Havoc.

“Me, I wrestle the way I always have wrestled. I’ve just never changed,” he concluded. “I’m very good at being Jimmy Havoc, I’m not really good at being someone else.”