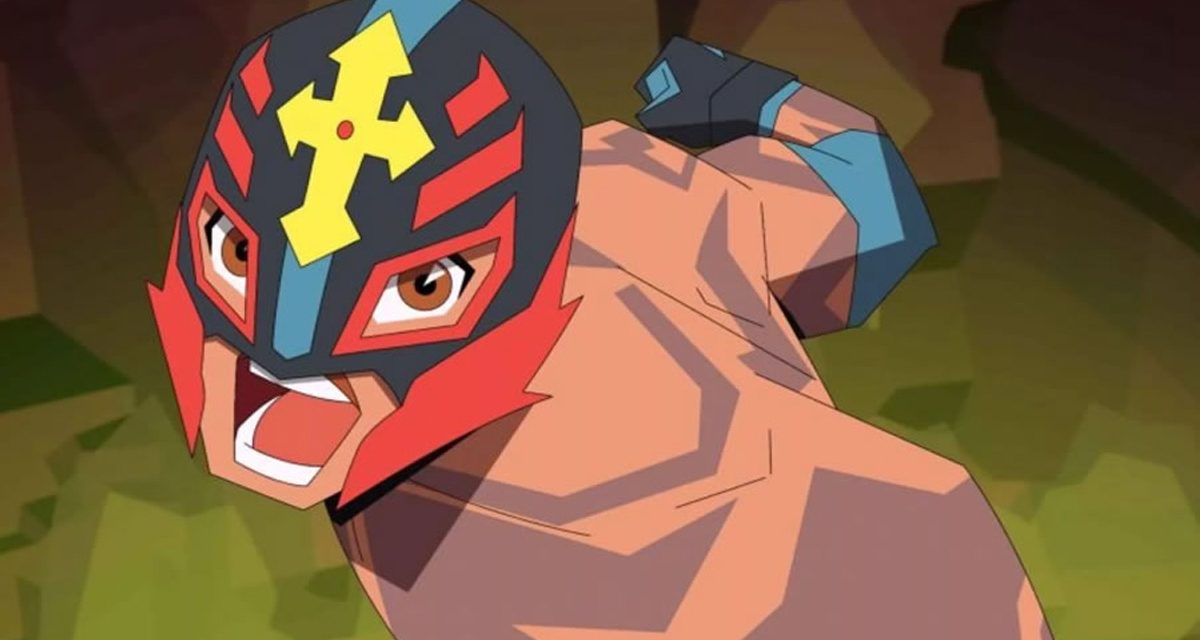 MONTREAL – Among all the big names to come to town in recent years, Rey Mysterio Jr. is arguably one of the biggest to hit the Montreal independent wrestling scene. Saturday night, at Metropolis, the former WWE World Heavyweight champion was set to face International Wrestling Syndicate champion, Speedball Mike Bailey, in an epic encounter.

Bailey is a name every indie wrestling fan has heard in the last year or two. He’s wrestled in EVOLVE, CZW, PWG and even in Mexico, and has received praise from fans and experts every time.

“I’ll be the first to admit, he has incredible talent,” Rey Mysterio told SLAM! Wrestling. “He’s very unique and he has a lot to offer. He has a lot of potential.” 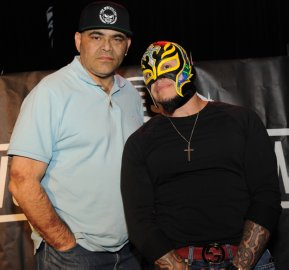 Konnan, who is a Lucha Underground agent and serves as a link between the Boyle Heights-based promotion and Asistencia Asesoría y Administración in Mexico, was in attendance Saturday night, had similar comments about the Montreal native.

“He’s an incredible talent, he has a lot of potential and he’s a very good human being which is important,” Konnan said. “He’s a good kid, and he’s gonna be a huge star in the future. Definitely, we are planning on bringing him back to Mexico.”

For fans who haven’t seen Mysterio wrestle since his departure from WWE, he assures his supporters that he hasn’t really changed.

“I’m the same one whether in WWE, Lucha Underground, ECW, AAA. The only thing that changed about myself is the adaptation due to so many injuries I’ve had,” said the 41-year old star.

Actually, maybe those injuries and the changes Mysterio are talking about forced the promoter to modify his match. Indeed, although the announced match was Bailey defending his championship against Mysterio in a singles match, by bell time, it was changed to a four-way match with Jack Evans and Black Dynamite being added to the mix.

Nevertheless, the match was fantastic and the crowd seemed very pleased by it, especially when Mysterio was in the ring. He had a good chemistry with Bailey and one can only hope that a one-on-one bout will happen in a near future. As for the match itself, Black Dynamite won with a 450 splash over Bailey to become the new IWS champion.

The IWS is lucky to be located in Montreal since it’s the Canadian city with the largest Latino community, something Mysterio was surprised to find out.

“I didn’t realize how big the Latino community was here,” he said. “I got to talk to a lot of the fans and media who are Hispanic. That really picks up my spirit to see that the Latino population is growing not only in the U.S., but also here. Overall, the welcome here in Canada is always with open arms and I’m very thankful.”

The last time Mysterio was in Montreal was under completely different circumstances. He was still with the WWE, wrestling “Dashing” Cody Rhodes in the last match of a taping of Monday Night Raw. It was September 10, 2012, the night that Jerry “The King” Lawler had a heart attack.

“We were talking about that last night. I was in a locker room with Jerry Lawler and I told him that I was coming here today. And he said, ‘Oh, remember what happened in Canada,’ and I said, ‘That’s right, I forgot about it.’ I told him you don’t know how anxious we all felt to have some news, just to know how you were doing. And fortunately, we did receive some news that you were stable and you were good, and it was just before my match, so I was able to go in peace and wrestle.”

Mysterio joined Lucha Underground for its second season. Konnan noted how different the concept is.

“It’s almost like science fiction meets Telenovela meets wrestling,” explained Konnan. “It has a very cinematic feel to it, like if you watch a miniseries on HBO or Showtime, it has that kind of feel to it and it became a cult favourite very quick.”

For Mysterio, Lucha Underground is like a fountain of youth.

“Lucha Underground is fresh, this is something new, it’s clean, very motivating, very unique,” he said. “This is the future of wrestling right here. It’s incredible to realize that pretty much half of the roster that’s there, these were guys who were watching me go when I was in WCW or ECW. So to be in the ring with these guys, I feel like I’m going back to my beginnings, to my roots. It’s rejuvenating me again.”

From bringing Vampiro back to his roots in Montreal last fall, to getting Jack Evans twice already and now Rey Mysterio, the links between Lucha Undeground and IWS promoter Manny Eleftheriou seem very strong. For Konnan, who didn’t participate in the show itself, it’s only the beginning.

“The deal is to do talent exchange. We’ve already had Speedball Bailey down in Mexico for a while and he did incredible,” he said. “We’ll be sending some more people here and they will send guys to Mexico, so the fans in Mexico can see the best of Montreal and vice versa. Maybe one day we’ll be doing a show together. We are just opening up right now the endless possibilities of working together.” 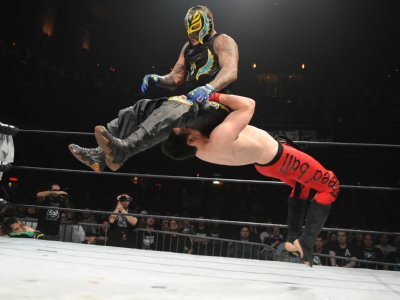 Metropolis is one the nicest venues in downtown Montreal and a wrestling show was being held there for the very first time. It was something that Eleftheriou and the late Michael “Llakor” Ryan were hoping of doing one day and therefore, the show was announced in memory of Ryan, who passed away April 21, 2013. Before the show started, this message was shown on the giant screen: “This show is dedicated to the memory of Michael ‘Llakor’ Ryan. We did it Mike. We’re at Metropolis!”

The venue was set up to welcome 1,300 fans and was more than half-full, making it the biggest crowd in all of Quebec indie wrestling so far this year.

But for Eleftheriou, this show was more than just an attendance number.

“I booked Metropolis 11 months ago. It was an insane amount of work, but we did it,” concluded Eleftheriou, who was celebrating his 40th birthday that very same day. “I’m happy. And the best part is Rey and Konnan were very very happy!” 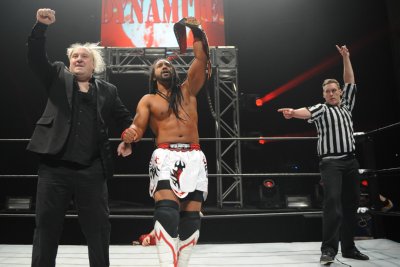 Pat Laprade had watery eyes when the show was announced to the memory of Michael Ryan. He really missed him Saturday night. Pat can be reached at [email protected], or his Facebook page and Twitter