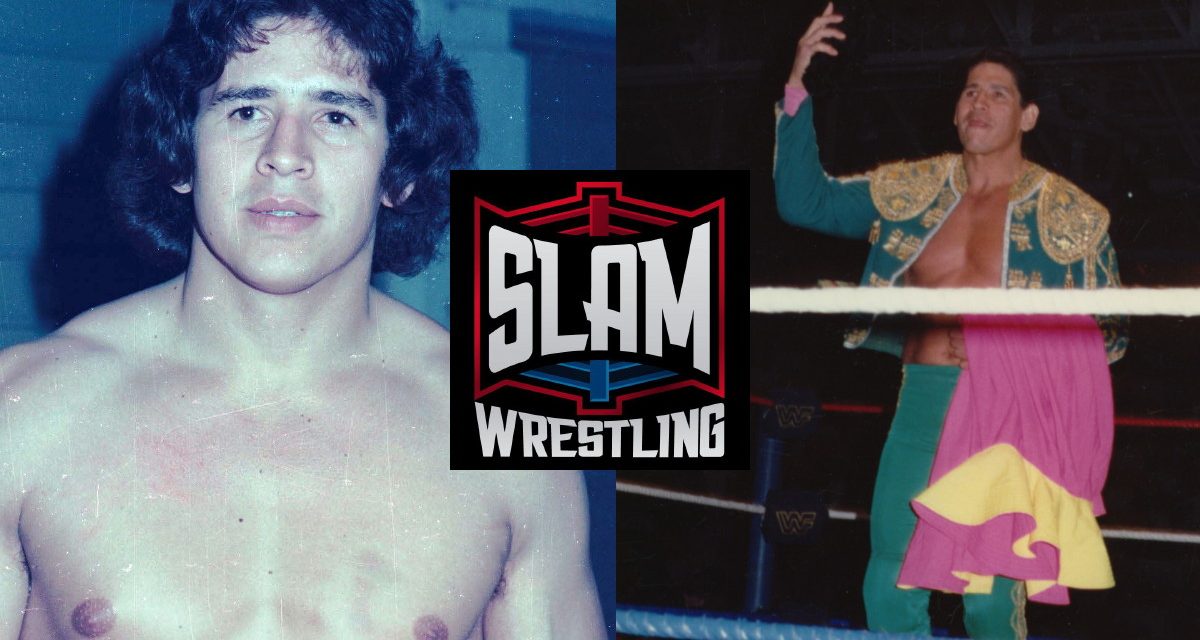 With the 25th anniversary of WrestleMania right around the corner, Tito Santana and Buddy Rose (the man behind the Executioner’s mask) are reflective about their show-opening match at the very first WrestleMania. 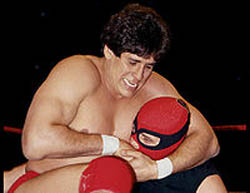 Tito Santana has a headlock on The Executioner at the first WrestleMania.

“I had a good opening match with Buddy, and Vince [McMahon] made certain WrestleMania was an event to be seen,” WWE Hall of Famer Santana said from his home in New Jersey.

“At the time, the match was no big deal to me,” the legendary Rose said last week from his home in Vancouver, WA. “I had already main-evented Madison Square Gardens against [Bob] Backlund. Then I had two matches with Pedro Morales, then a Putski — then a [Jimmy] Snuka. With WrestleMania, the only thing I can tell you is George Scott was the booker, and I was asked to be on the card but he didn’t want ‘Playboy.’ I was going to get a big push along with (Ricky) Steamboat — Steamboat had just come in and we were going to have a feud nationwide. (Scott) didn’t want to see Playboy lose because they had other plans for me. I know now though (WrestleMania) was probably a big deal to fans like you.”

It was a big deal, the biggest, as I’ve always said: there’s something so timeless and magical about being at WrestleMania — even when you’re part of a closed-circuit television audience more than 500 kilometres away from the live event.

For me, it was the Kitchener Memorial Auditorium on March 31, 1985, where I sat in the first row on the floor (the ice rink was covered with wood planks), gazing up at the giant screen and waiting in anticipation as the minutes ticked down to WrestleMania. At the age of 13, wrestling was a major part of my life, as I had already been to several NWA live events and my first WWF house show the summer before at the Buffalo Memorial Auditorium.

A close-up of the Executioner mask. Courtesy PlayboyBuddyRose.com

But nothing beat the anticipation I felt for the first WrestleMania, as I camped out all night in freezing temperatures to be first in line to score tickets for what would become an unprecedented event for pro wrestling. As I reflect back on 25 years of watching WrestleMania, either on close-circuit, pay-per-view, or live in Toronto, the sights and sounds of that historical first match between Santana versus the Executioner still echoes clearly in my memory.

I asked Rose about the inspiration behind the Executioner’s costume: “I wore a black suit that Ed Wiskoski (Colonel DeBeers) wore wrestling in Portland, as the Convict a few years earlier. I remember my name was on the side of my boots and to hide my identity, I had to find electrical tape to cover up (the word) ‘Playboy.’ And I got Sweet Ebony’s mask to wear — he was a black guy wrestling in Portland. I hated wearing the mask, but it was the one and only time I wore it and I was just glad to be there.”

Santana was glad to be there as well, wrestling in front of 20,000 fans at the Garden and over one million fans on closed-circuit, making it the largest closed circuit television audience in the U.S. at the time. But what he didn’t understand, when first booked to wrestle, was his place on the card in the first match. “I was in the middle of a big angle with Greg Valentine, and I couldn’t figure out why I was in the first match,” Santana said. “I couldn’t understand why Greg and I couldn’t have a main event match at this unprecedented event, until Vince Jr. came up to me before I went to the ring and said, ‘This is a do or die situation. The beginning (of WrestleMania) is very important,’ he explained, and it gave me a different perspective of what my job was — and I accomplished that.”

Santana added, “I was a company man, and always wanted to do what’s best. I can remember Vince saying, ‘If we don’t make it, we are going down — this is all my money. But if it’s successful, we’re off and running and nothing can stop us.’ I remember Vince’s pep talk made me feel real good, and he had the confidence in me and Buddy to get the people on their feet right off the bat.” 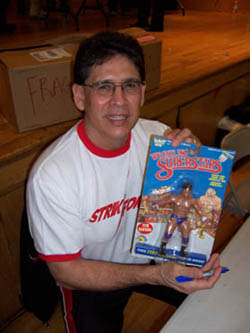 Tito Santana shows off a classic action figure of himself in 2007. Photo by Mike Mastrandrea.

And getting the fans on their feet is exactly what Santana and Rose did, as the crowd went crazy for the action-filled back-and-forth battle, as both participants accomplished their goal of energizing the audience. The fast-paced five minute bout ended when Rose submitted to Santana’s figure-four leg lock. Vividly, I can still see the crowd roaring as Santana brought the crowd to its feet, once again, with his trademark battle cry, “Arriba!”

“I was glad he had me, and I had him — wrestling Tito was great, and was always a night off,” said Rose. “Tito would sometimes fill in for other wrestlers, and he always worked his ass off. And he never hurt you, even with that ‘flying jalapeno’ (trademark flying forearm smash).” WrestleMania would be the first time Santana and Rose ever met in the ring, but they would battle across the country in years to come.

“Looking back on that match at WrestleMania though, I remember we were told we could only go five to six minutes,” Rose said, “And for me, that was when wrestling stopped being where you could just have a match, and became something where you had to make it short and fit within an exact time so they could get the next match on.”

Santana agreed, “With WrestleMania, Vince transformed the business from an arena show to a spectacle.” Rose remembered at the half-time intermission of WrestleMania, wrestlers backstage knew they were part of something epic. “I remember people turning to me and talking about WrestleMania II,” recalled Rose. “I said, ‘Really — you think there will be one?’ And they were saying, ‘Yeah — look at this — It’s going great!’ And we all got paid good.”

Later on the card at WrestleMania, Santana returned at ringside to dispute Valentine’s tainted victory over Junkyard Dog. Because of Santana’s interference, Valentine’s victory was thrown out by the referee and the match was ordered to continue. An irate Valentine refused to return to the ring though and lost the match due to a count-out. “I found out later the reason Greg and I didn’t wrestle a match that day was because our matches were so good that they wanted the angle to hit all the big cities, and not expose it at WrestleMania, I was told by George Scott.”

Along with being in the first match, Santana said one of his favourite memories of WrestleMania was seeing his good friend Andre the Giant win his $15,000 body slam match against the “unslammable” Big John Studd. “Andre and I had become very, very good friends over the years and he always expected me to play cards like cribbage and gin rummy with him in the dressing room or at the hotel. He was a gentle giant and very private, and I remember him sharing pictures of his daughter with me. But one of my favourite memories of him is in his match at WrestleMania — the audience was going bananas when Andre threw real money into the crowd — I’ll never forget that.”

In Santana’s autobiography, Tales from the Ring, he shares other great memories of WrestleMania — this time backstage and on a more personal level. “I also met a pair of flamboyant people that night that I will never forget — iconic artist Andy Warhol and legendary entertainer Liberace,” Santana writes in the chapter “A Who’s Who at Wrestlemania.” “It turned out that Warhol wasn’t just a professional wrestling fan, but a fan of me. He made his way to the locker room in the hopes of meeting me. We chatted for a while and I was so impressed with his personality and character. I gave him my autograph and we had some pictures taken with each other. Liberace was there with the Rockettes. He put on a great performance right in the middle of the ring. Afterward, I had a chance to visit with him in the locker room for about ten minutes. He was very polite and quite a small person. He told me that he respected what the wrestlers were doing and how hard they worked — a compliment that meant a lot to me.” 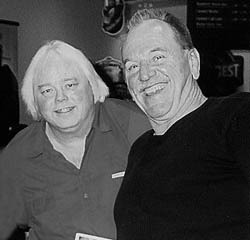 Buddy Rose and Ed Wiskoski in 2004. Photo by Steven Johnson.

Rose, unmasked backstage, remembered the compliment he received from pop-sensation Cyndi Lauper that night: “She kept pulling me around by the arm saying, ‘I love this guy,'” Rose laughed. “She kept saying, ‘Your name is Playboy — I love it, I love this guy!’ It was great fun to meet Cyndi Lauper, (Muhammad) Ali, Liberace, and (New York Yankees legend) Billy Martin — I used to deliver his newspaper!” Sadly, Warhol and Liberace both died less than two years after WrestleMania, only days apart, and Martin was killed in a car crash in 1989.

Though Santana and Rose have lost many friends and fellow wrestlers along the way since that first WrestleMania, they’re both grateful to be involved in wrestling on the independent scene, as Rose trains aspiring young wrestlers at his wrestling school, and Santana still wrestles occasionally. “I tell my wife, when fans start hollering, ‘You old fart!’ — that’s when I’ll stop,” Santana laughed. “Jimmy Snuka is still wrestling at 65, and he’s 10 years older than me. I still love going out there and getting the fans on their feet. I still look not too much different than when I wrestled in the WWF, and I still get a great response.”

Rose still gets a great response too, when he’s stopped on the street by fans that remember him as the number one heel in the Northwest, and still watch his matches from the AWA shown frequently on ESPN Classics. “It’s always great to hear fans say they remember me from those days. You know those matches (from Portland Wrestling) on Roddy Piper’s DVD (Born to Controversy), I gave that footage to him — I taped as many shows as I could, and you can see some of those great matches on YouTube.”

“I remember right after WrestleMania was over, Roddy and I raced to the airport to catch a flight and we arrived in Portland that night at 10pm,” Rose added. “I have great memories looking back now at that day. And something I can always say is that I was in the very first match, at the very first WrestleMania.”