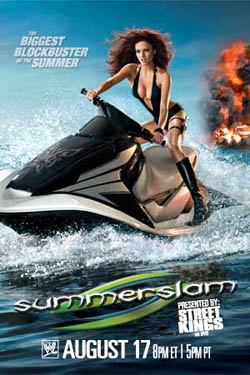 With the 2008 edition of SummerSlam billed as “The Summer’s Biggest Blockbuster,” the big question awaiting those assembled at the Conseco Fieldhouse in Indianapolis Sunday night was whether the event would be a runaway smash like The Dark Knight or something fit for only the most diehard fans like The X Files: I Want to Believe.

Befitting its status as one of the year’s major pay-per-views, SummerSlam sported a card that was as loaded as WWE bookers could make it. Just about every singles title was on the line, and a couple of matches loomed large — literally in the case of The Great Khali facing Triple H and figuratively with the years-in-the-making (but only weeks-in-the-building) first clash between John Cena and Batista.

But the highlight of the night took place in the main event, which saw the returning Undertaker take on Edge in a Hell in a Cell Match. An especially large cage towered over the ring, pretty much assuring the two superstars wouldn’t be climbing to the top to recreate Mick Foley’s famous fall from a decade ago.

That didn’t mean there wasn’t plenty of carnage. The Undertaker struck first with a boot to the head and wasted little time making sure Edge’s first time inside the cell included a big helping of the steel fence.

Vickie Guerrero and her family watched backstage as the Dead Man continued his assault in and out of the ring, using the steps as a weapon. Edge turned the tables and used the steps to his own advantage, following up with a low Spear.

The Canadian superstar set up a double stack of tables on the floor, but ‘Taker recovered in time to avoid being sent through with a suplex. Edge turned to a steel chair and a ladder to do more damage, sending his foe through a third table set up inside the ring.

Both men scored near falls before the action spilled back outside, where Edge leapt off the steps to deliver a Spear that sent both men crashing through a section of the cell that almost took out Jim Ross in the process. Another spear ended with Undertaker smashing through the ECW announce table.

Neither grappler could get the upper hand back in the ring in a sequence that featured both men stealing the other’s signature moves. Undertaker finally broke the stalemate by smashing a video camera over Edge’s head, using two chairs for a Con-chair-to and pinning him with a Tombstone.

Unsatisfied with merely winning the match, Undertaker decided to return to the ring after the bell, where he set up two ladders and told Edge that he was going to “send him to hell.” A chokeslam from atop his perch drove Edge through the ring, and flames shot up through the resulting hole as SummerSlam reached a fiery end.

The next WWE pay-per-view is Unforgiven on September 7.

Reunited and it feels so good! Dale and Nick haven’t been able to team up for a pay-per-view report since January’s Royal Rumble, so hopefully they won’t forget the drill. Nick’s comments appear in plain type with Dale’s thoughts in italics.

Perhaps it’s a bad omen that SummerSlam is sponsored by the DVD release of a movie (Street Kings starring Keanu Reeves) that didn’t exactly light it up at the box office. The theater-style marquee above the entrance is cool though.

I think the writers missed out on a big opportunity in this feud. They should have played it like Hardy got resigned to a big contract — say, right after the draft — and had MVP get jealous. In any case, a fairly evenly fought bout looks like it’s tilting in Jeff’s favor as he climbs up to drop the Swanton Bomb. But Shelton Benjamin shows up ringside, and Hardy decides to take him out instead. Enough time passes that MVP rolls out of the way when he finally tries the Swanton. A drive-by kick puts Jeff down for three. Not as good as you might expect from these two.

Maria interviews her old boyfriend Santino Marella, who shows off his new girl, Beth Phoenix. Santino extols the virtue of a unibrow. Phoenix then stares Maria down, telling her Santino belongs to the Glamazon now.

Santino also introduces us to a new word: manscaping! I’ll return the favor by saying that according to the almighty keeper of all knowledge (Wikipedia, of course), the medical term for unibrow is synophrys. See? We educate as well as inform.

Mickie dropkicks Phoenix off the apron while she is arguing with her man. Mickie nails a hurracanrana and then a Thesz press of the top rope. Santino breaks the pin. James hits a DDT on Marella, but Phoenix recovers to hit a double chicken wing into a facebuster. Phoenix covers for the win.

Shawn Michaels comes to the ring with his wife, Rebecca. HBK thanks the fans for their support. Michaels tells us that the doctors have said it is time to walk away. HBK says he will heed the advice and step down. Michaels reflects on his career. Chris Jericho interrupts the proceedings and faces off with HBK in the ring. Jericho tells HBK he won’t let him go out on his own terms. Jericho wants Michaels to admit he is leaving because of him. Shawn tells him to get out of the ring. Jericho wants credit for his work and wants Michaels to admit it. HBK will tell his wife and kids that he can’t wrestle anymore because of the actions of a vile, selfish man. He goes on tell Jericho that Jericho will never be him. Jericho goes for a cheap shot, but HBK ducks and it takes out Rebecca. Michaels attends to his wife while Jericho slinks away.

Too bad Shawn can’t get revenge — he’s retired! Our unofficial historian and timekeeper, Brian Whorl, thinks Michaels should apply for reinstatement so the WWE can cash in on the Brett Favre saga.

Hardy starts off with a forearm, then ducks a corner charge. Henry falls out of the corner and Matt covers. Tony Atlas pulls Matt off of Henry and out of the ring. The ref calls for the bell. Atlas beats down Matt until Jeff makes the save.

The once-prestigious ECW belt has now been “defended” at WrestleMania and SummerSlam in two matches that lasted less than a minute combined. Thankfully Paul Heyman is still alive, because if he wasn’t, he’d be rolling in his grave right now.

Punk ducks a clothesline and connects with a series of kicks. Bradshaw retaliates with a fallaway slam off the middle rope. JBL locks in a bear hug. JBL breaks free and hits a bulldog. JBL blocks the GTS and connects with a Clothesline from Hell. JBL repeatedly drops elbows, but Punk kicks out. Punk gets caught in midair and power slammed, but JBL can’t get the pin. Punk counters a clothesline with a spinning heel kick. JBL hits a back suplex off the top rope. Punk counters a short arm clothesline with the GTS and covers for the three count.

Winner … and CM Punk at 11 minutes and nine seconds.

Say what you want about Khali as a worker, but the man sure cuts one heck of a promo. At least he does in my imagination, where I can understand what he’s saying. Also, Kevin Nash once said that he only had two moves, but they both hurt. Khali is kind of like that, except neither move looks like it hurts. Much of the drama in this match revolves around whether or not it is “anatomically possible” (a great quote from J.R.) for HHH to hit the Pedigree on Khali. Several minutes — and “You can’t wrestle!” chants — in, we find out it is.

Batista hits a suplex. Cena responds with a fisherman’s suplex. Batista connects with a sidewalk slam but only gets a two count. Cena goes for an early F-U, but Batista drops out and hits a chop block. Batista then locks in the Figure Four. Cena is able to grab the ropes. On the break, Cena sets up the F-U and dumps Batista over the top rope. Back in the ring, Cena connects with the Five-Knuckle Shuffle. Batista gets up and hits a big boot. Cena runs into a spine buster. Cena is able to lock in the STF-U. Cena drags his foe back to the middle of the ring, but Dave is able to get to the ropes. Cena counters a Batista Bomb into the F-U. Batista kicks out of the pin. Cena fights Batista off the top rope, but is power bombed out of mid-air. Cena gets a shoulder up on the pin. Batista hits another Batista Bomb and covers for the win.

It would be great if this means a legitimate heel turn for Cena, but the consensus here is that WWE can’t jeopardize its main mover of merchandise. Too bad.

Edge vs. The Undertaker — Hell in a Cell

Winner … The Undertaker at 26 minutes and five seconds.