Beyond the Mat documentary review: Powerful storytelling in quiet moments 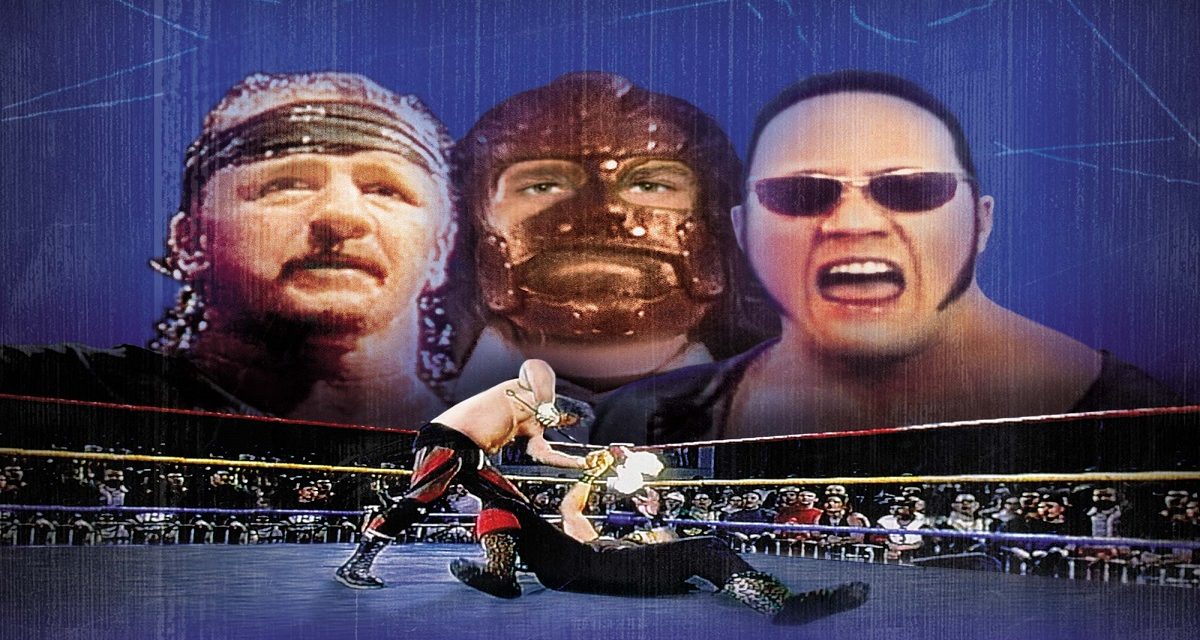 The power of a documentary is found in its ability to either show us a world unfamiliar to us or something new about a world we thought was familiar. Beyond the Mat fills both of those requirements. There’s the entertaining but expected journey into what was then World Wrestling Federation headquarters and backstage at their Royal Rumble event, but there are also intimate moments spent with wrestlers and their families, and this is where the film really soars.

In many ways, Beyond the Mat employs traditional wrestling storytelling. The cover has an in-your-face tagline bragging that this is “the film Vince McMahon doesn’t want you to see!” This is something akin to any given WWE announcer exclaiming in shock that “I’ve never seen anyone manhandle The Undertaker this way before!” any time there’s a new plus-size wrestler in town. The truth is there isn’t much in here that Vince McMahon likely wouldn’t want the average fan to see. The tagline suggests that we’re about to see the real down and dirty Mr. McMahon and the warts of the industry. In truth, this film praises the industry from top to bottom more often than it chastises it. McMahon’s concerns about the film reportedly stem from Blaustein’s insistence on retaining editing control over the final product and the fact that the film doesn’t showcase WWE wrestlers exclusively. 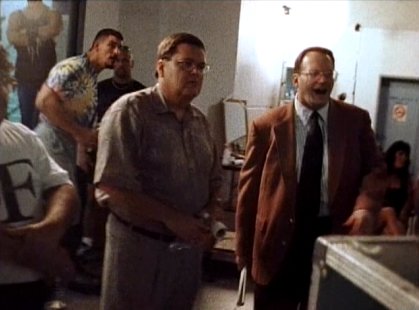 Jim Ross and Jim Cornette watch from backstage as Modest and Jones get an in-ring try-out with the WWF.

Blaustein begins his journey to understanding the wild world of wrestling at Roland Alexander’s All Pro Wrestling. We are introduced to Tony Jones and Mike Modest, two of Alexander’s prized pupils. Mike Modest’s position as ‘top dog’ in the company has afforded him the lofty position of, well, a loft positioned above the small wrestling arena. Apparently, two wrestlers have left APW to achieve a place in the WWF, but we aren’t told who they are. By launching the audience’s journey with the aspirations that Jones and Modest have of landing a contract with the WWF it allows the viewer to learn about the wrestling business from the bottom up without being talked down to. A simple narrative explaining how the wrestling business works is important for viewers who don’t know much about wrestling, but as that would not appeal to already knowledgeable fans the film must tread a very fine line in holding the interest of both audiences.

This is where the tagline and other devices show how Beyond The Mat isn’t just about wrestling: it employs the same storytelling that wrestling does. It is wrestling. Wrestling storylines are often loaded with exaggeration and hype, as is this film. Why have The Rock featured on the cover alongside Mick Foley and Terry Funk? The Rock has a cameo appearance at best in the film – why isn’t Jake Roberts or New Jack on the cover in his place? Well, because The Rock’s face encourages more rentals and purchases than they do. Wrestling is, for better or for worse, often described as a ‘soap opera for men’, interspersing brutal action with familial and romantic story threads: this film does exactly the same thing.  This is when Beyond The Mat works best, using the very same storytelling engine that drives the sport the viewers already follow. 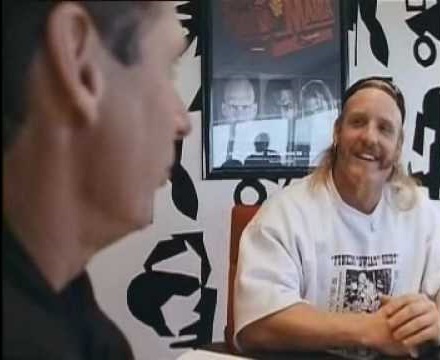 Blaustein’s dramatic question at the beginning of the film is a simple one, and harkens back to the mysterious Posse in William Goldman’s Butch Cassidy & The Sundance Kid: “Who are these guys?” This is what most wrestling fans likely watch the film to discover; they want to know what makes their favourite wrestlers tick. The results are probably not what one would expect. Besides encouraging Darren Drozdov to vomit into a trash can and earn his new name of “Puke”, there isn’t much of the bombastic Mr. McMahon to be seen in Vince’s on-screen appearance.

In fact, what little he says is very enlightening, claiming that the WWF’s main purpose is to “make movies”, a statement that, in the literal sense and with the releases of See No Evil and Walking Tall, is proving to be valid. In another sense, though, McMahon is stating how the WWF’s approach to storytelling is more Hollywood than headlocks, which is also an accurate description of the product.

I wouldn’t believe that any casual fan of the WWF would expect to see Jake Roberts in the state that he is during the film. Portraying Roberts as a man battling his own demons became a staple for anyone announcing during The Snake’s comeback to the WWF in the mid-90’s, but when we listen to him ramble after doing cocaine, watch him pissing in a bucket before working a small-town wrestling show, and witness him sabotage his own attempts at familial reconciliations, we are seeing “in-your-face” storytelling at work. This is another strength of the documentary format: Blaustein sits back and just watches as Roberts demystifies himself to the point of humiliation, and the result is honest and pitiful, although it likely doesn’t engender much sympathy.  Comparing this approach to the WWE-produced The Self-Destruction of The Ultimate Warrior, where an agenda is painfully evident, there’s no question that Roberts’ role in Beyond The Mat is honoured with more truthful and credible filmmaking.

Blaustein is less neutral when it comes to the segment featuring Mick Foley. The shock value of seeing “the deranged Mankind” speak eloquently and lovingly of his family had already been cashed in – as when Foley dedicated his first WWF World Title win to his two children at home. Blaustein went a step further, though, and managed to capture an altogether tragic merging of Foley’s professional and personal lives at the 1999 Royal Rumble. There was Mankind, having the beating of his life at the hands of The Rock, all while Foley’s wife Collette sat in the audience with their children Dewey and Noelle.  Collette screamed and cried as she tried to shield the kids from witnessing the dismantling of their daddy. 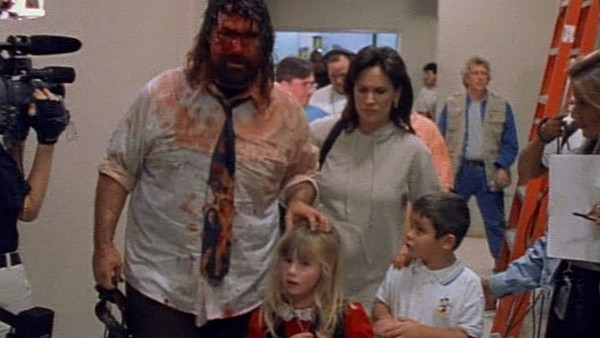 Much has been made of how Blaustein showed the footage to Foley, who then regretfully admitted that it was a mistake to have his family in the audience, and questioned his quality as a father. This was a powerfully manipulative moment, though Blaustein neglects to push the envelope just a little further: why is Foley taking all of the blame for his parenting skills? There were two parents in attendance that night, and one of them wasn’t handcuffed in a wrestling ring. Perhaps Collette should shoulder some of the responsibility for not removing the children much sooner than she did, but this issue remains untouched.

In the rest of the film, Blaustein gives us some wonderful moments of oddly juxtaposed sights and sounds, including a bridal party preparing for Funk’s daughter’s wedding with all of the ladies discussing whether or not Terry is actually going to retire, and Paul Heyman doing post-production on an ECW event in his mother’s basement, complete with mom doing the ironing in the background. He entertains New Jack as he visits L.A. to see if he might be able to find some acting work. We are hit with a number of quick vignettes with Chyna, Koko B. Ware, Jesse Ventura and others along with ECW’s first pay-per-view, all receiving a tiny share of the filmmaker’s attention.

We are taken on a journey where every time we think we’ve hit the bottom, as one might think at the very beginning as Jones and Modest struggle in their search for notoriety, we are dragged to a new low as Roberts and Ware yearn for the glory days. Blaustein goes to great lengths to strip pro wrestling of its illusions and magic, but not in an attempt to de-glorify it. Rather, he manages to shown the true heart of the business in the workers that live to perform despite the pitfalls that continually open up before them.

It seems clear that the storytelling could have gone on for hours longer, and the tales collected in Beyond The Mat represent only the tip of the iceberg. The world of pro wrestling is ripe with both drama and melodrama, and hopefully this film represents a trend in capturing the whole picture.

The advertising tries for a shock-and-awe approach, but it’s the subtle moments in the film that are the most powerful and will stay with you long after viewing.