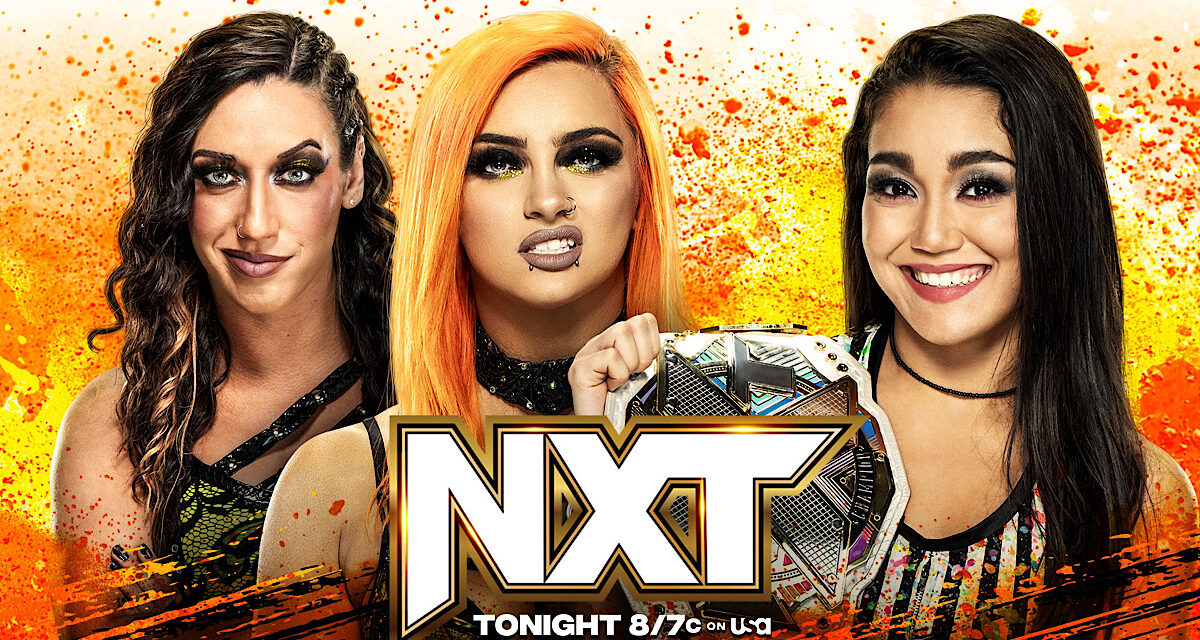 “Let’s have some fun with Bron Breakker!” recorded Grayson Waller in a series of footage from the WWE Performance Center where the two erupted in a supposedly spontaneous brawl earlier this week. Various meatheads and Norman Smiley saved the day and separated the rivals before cameras cut back to Vic Joseph and Booker T at ringside: “We ‘bout to start the show, dawg!”

Female rookie-of-the-year contender Stratton is back in action after some surgical updates and mid-match fakes a knee injury. The referee calls down a medical assistant, and in distraction, Hartwell is taken down as Stratton delivers the picture-perfect finishing moonsault for the returning pinfall victory. She’ll be rocket-strapped to the top sooner than later, but Hartwell continues to wade without a way.

Jacy Jayne is interviewed backstage where the cracks of Toxic Attraction completely break. She claims Gigi Dolin has held her down and predicts “something you’ve never seen before” in tonight’s summit.

Drew Gulak and his students visit the Diamond Mine dojo, where the teacher takes issue with the Creed Brothers beating his men. He’s outwrestled too, claiming, “That was a cheapshot and you know it!” It’s good to see legitimate mat wrestling featured on the show, and the Creed Brothers exemplify that.

The Andre Chase Award Ceremony commemorates 19-year-old Thea Hail’s first in-ring victory. “She looked fear right in the eye, and she said, ‘Fear, you don’t scare me mother-!’” bleeps the proud professor. Out comes creepy JD McDonagh with some admittedly hard lines, but Chase is prepared with some harder rights in his red Jordan 1s and crewneck sweater.

McDonagh’s entrance theme guitar riffs are too gritty to lose to a man in slacks, but the professor has the audience behind him. The fun C-H-A-S-E-U stomps are recited in unison as commentary discusses the possible dissension between Chase and foreign student Duke Hudson ringside. McDonagh reaches the bottom rope after a sick Destroyer, and Hudson walks off as the former delivers his finishing slam for three.

Kiana James and Fallon Henley vs Diamond Mine

Beforehand is a backstage meeting between the starting duo and Josh Briggs and Brooks Jensen, as the competitors lightly argue over their gameplan. James and Henley begin with a miscommunication as the tension between them thickens, but it’s ultimately the villainous tactics of the former that allows them to secure the victory to Jensen and Briggs’ shock.

Malik Blade, Edris Enofe and Schism approach New Day for a potential title match, but the power of positivity equates to booking power as Xavier Woods and Kofi Kingston announce the opportunity for both teams to enter their four-way match at NXT Vengeance Day.

Apollo Crews is in the barbershop even though “he don’t got no damn hair” as Trick Williams pointed out last week. The latter barges in with Carmelo Hayes, who says Crews “got the call early” and is a lesser version of himself. Crews issues a challenge for February 4 in a 2-out-of-3 Falls match which is can’t miss and won’t miss. And even amidst barbershop banter, Hayes continues to be the realest dude in NXT.

Drew Gulak and Hank Walker vs The Creed Brothers

Upstart Walker still wrestles in jeans and a button-up despite being paired with traditional wrestler Gulak, who takes out Julius Creed with a clothesline preceding picture-in-picture. The bulky brothers hit effortless standing moonsaults in a comeback, ending in a unique double team that further promotes the idea of them being this era’s Steiners. Out comes Charlie Dempsey to sidetrack Gulak, which leaves Walker – who really impressed tonight – by himself to eat the pinfall via Brutus Ball.

It’s Gigi Dolin’s turn to give her thoughts on Toxic Attraction’s split, using thorns and pedals of a rose as a metaphor for herself before tonight’s summit.

NXT’s cinema style programming is used for good as “The Don” Tony D’Angelo and “The Underboss” Channing Lorenzo meet in a private room of an Italian restaurant. “Salud,” they toast as recurring character AJ Galante pays off their meal.

Valetina Feroz makes her way ringside as Booker T gets caught in the crosshairs of Choo’s body pillow. “I’m good, I’m good,” he assures, because thank god, he could’ve been injured. Eventually, Lopez pulls her storied brass knuckles out making it “nap time” for Choo. Later, Feroz is conflicted about potentially costing her friend the match.

Brooks Jensen talked to Shawn Michaels, and he got Fallon Henley and Kiana James an NXT Women’s Tag Team Championship match at Vengeance Day. Henley instead feels “blindsided,” as her partnership with James was supposed to be a one-off.

“How do you do, fellow kids?” says NXT as Stevie Turner adopts the gimmick of a livestream gamer. She appears on the monitor to conduct her own interview with fan questions in the “superchat” announcing that her debut match will be next week. It’s new, but it’s more so very, very odd.

In a pink fur coat arrives Grayson Waller, who is breaking out in this rivalry against NXT Champion Bron Breakker, who storms through the arena as roster members attempt to stop him. It’s another huge pull-apart brawl, but Waller sidesteps the champion making him crash through the barricade like a hole in the wall. Waller stands tall with his replica belt, continuing to be that guy on a weekly basis.

From Italian restaurants to Scottish pubs, Gallus discuss their NXT Tag Team Championship match at Vengeance Day over a game of pool.

Fyre goes it alone until Sol Ruca makes a late entrance saying, “I got your back!” The match subtly asks if the duo can coexist, and Fyre pushes the aggression levels before picture-in-picture. The champions connect with double team maneuvers, and Chance sends Fyre into the steps as Ruca takes the pinfall. Fyre brushes past Ruca as Isla Dawn meets her at the entranceway, and the supposed rivals walk off together.

Cora Jade is interviewed in the locker room about her issues with Lyra Valkyria, calling her a “bird brain.” Meanwhile, cameras quickly cut to the parking lot where Nikkita Lyons is sobbing on the concrete after a mystery attack.

Duke Hudson defends himself for walking out earlier, saying that he walked into Shawn Michaels office for a spot in the New Day invitational next week. Bygones are bygones as the duo celebrates alongside The Hail over their shot at gold.

Booker T oversees the NXT Women’s Championship summit, which starts well after the show’s second hour. Jacy Jayne claims to have carried Gigi Dolin in Toxic Attraction, who shoots back about the former puking before matches over insecurities; “Shucky ducky quack quack!” hits Booker T. Roxanne Perez remains confident as the Toxic Attraction members are more concerned with themselves… until they turn the tables on champion Perez, working together and holding the championship belt in unison.

The intricacies of storylines happening all throughout the card is very impressive, and each roster member feels like they’re being used to their potential. I wish the matches were more amazing and segments less manufactured but pick and choose.