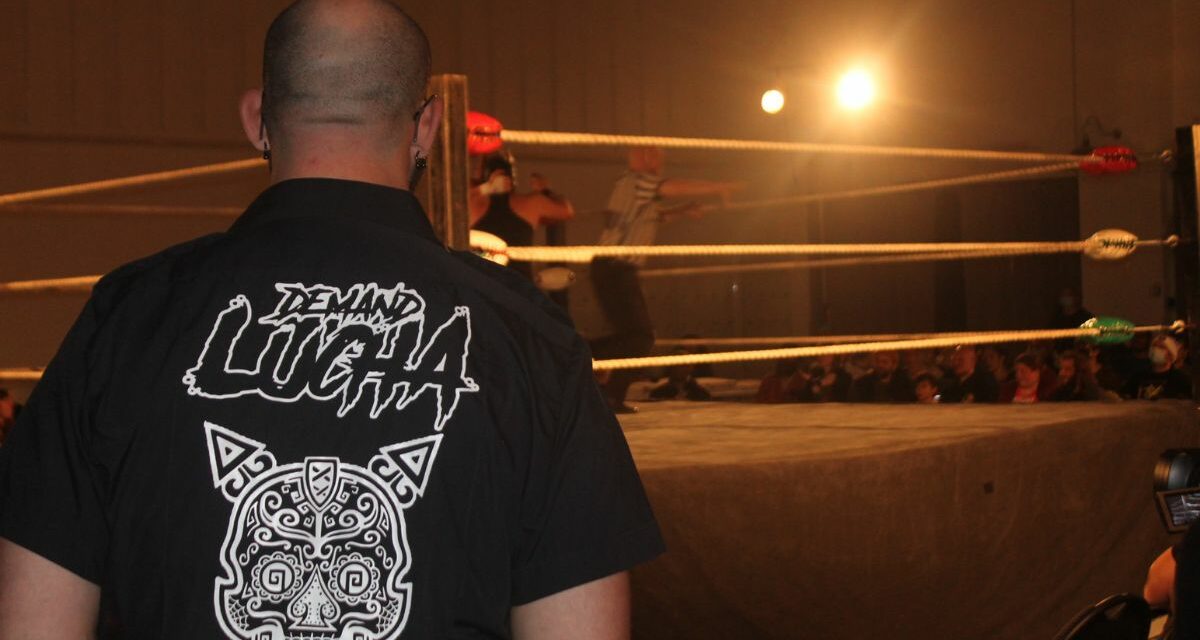 TORONTO – I’m old and jaded, and have no problem admitting that. I have been to so many wrestling shows through the years, met so many fans, wrestlers, referees, promoters, hucksters that I can be a bit blasé when I’m at an actual show.

That’s why the Demand Lucha show that I attended on Thursday, December 15th, at The Parkdale Hall in Toronto’s west end, stands out for me.

You see, unlike many shows where it’s filled with so-called smart fans (or smarks) who are hip to the inner-workings of the business — I’m looking at you, AEW fans — this show in Toronto was instead populated with hipsters. These were young adult fans out to have a few drinks with their friends and be entertained, horrible weather or not.

Yes, there were some regulars that you see at all the shows, and that’s awesome. Their loyalty is often rewarded with a fun impromptu spot.

Those knowledgeable fans also know to get out of the way. 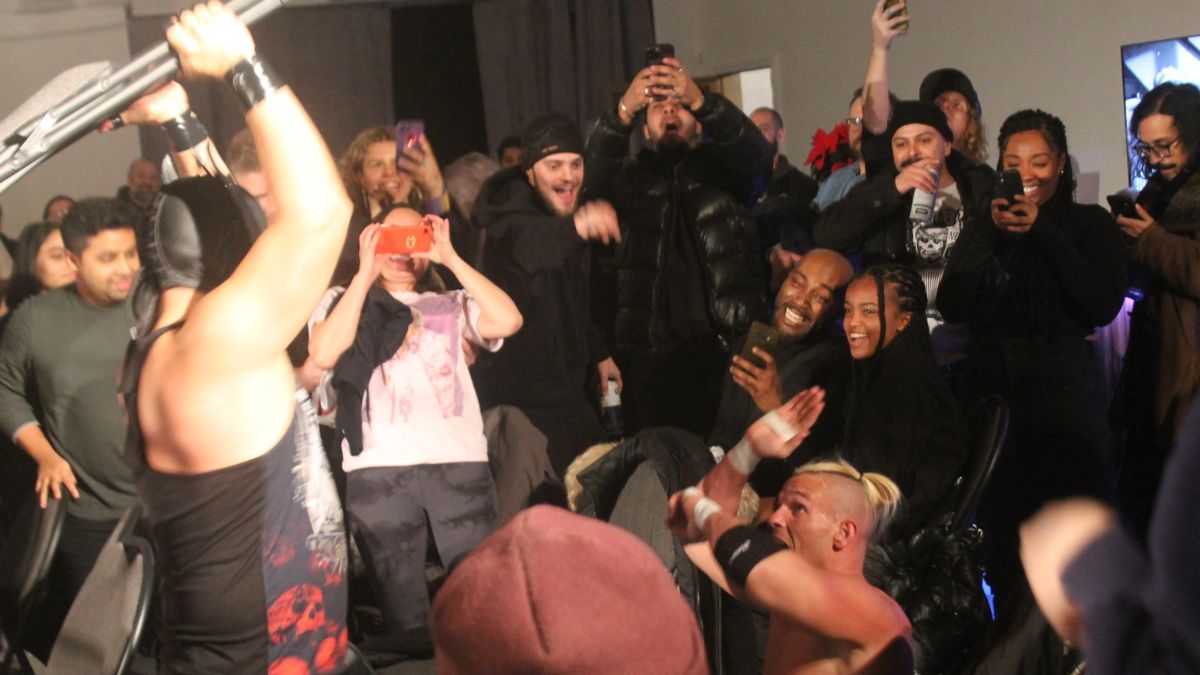 The crowd scurries out of the way … to find a good spot to video Ark Angel’s chair shot on Sam Adonis. All photos by Greg Oliver

When Sam Adonis was taking on Ark Angel, they started battling outside the ring, and Adonis had to shout “Get out of the way!” three or four times to the fans oblivious to the fact that their collection of chairs was about to be obliterated. Much scurrying ensued, and, lesson learned, during the rest of the show when the action spilled into the crowd, the people were much faster at racing for cover, their craft beer or cider held tightly.

There’s something about the over-the-topness of the lucha libre style that lets it be a little more accessible to new fans, and according to an informal survey by the announcer who asked who was at Demand Lucha for the first time, there were plenty of them.

It’s the simple and colorful costumes. The melodrama. The action. But mostly it’s the masks … and the mystery. Privileged to be there before the doors opened to the crowd, I know who some of the people were in the masks, and often later they are able to just mingle unmasked.

Though stars drive any show. 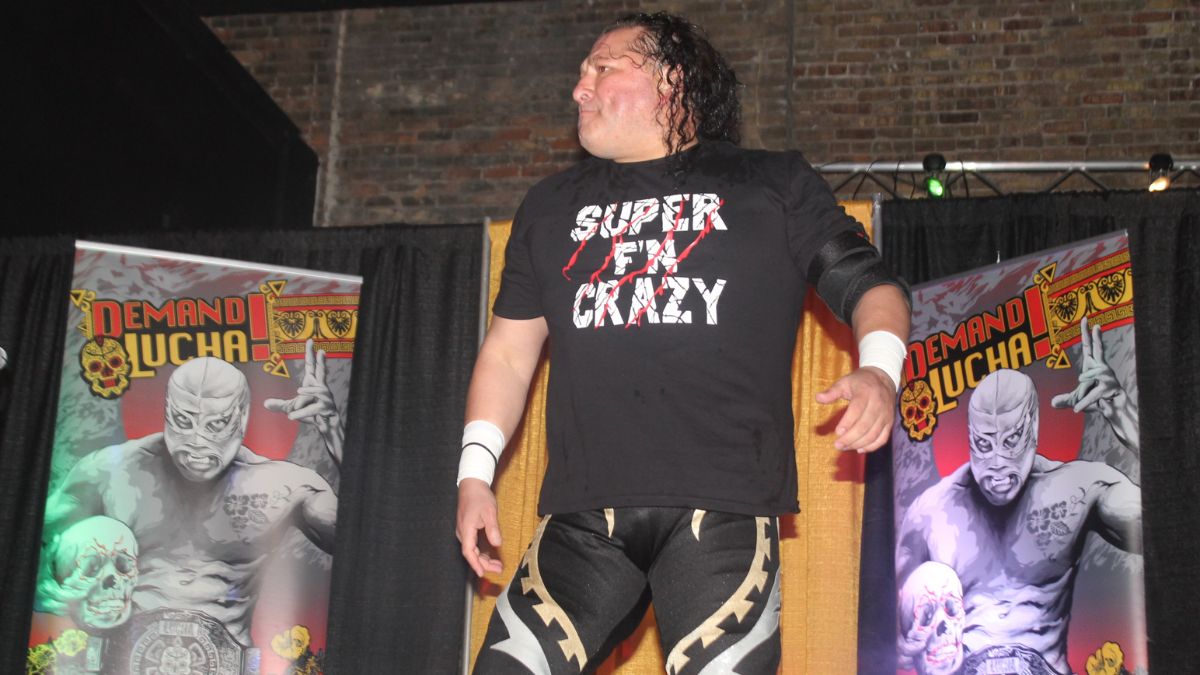 There was little question that Super Crazzy, an ECW original, was the most “over” wrestler, even with those new fans. He was returning to Demand Lucha, for one thing, but like meeting someone in junior hockey compared to an NHLer, there’s just a different presence with someone who has been there, done that, under the big lights. He was a part of a show-long wacky storyline, losing to Mega Medico who was aided by Nurse Novacane in a Holiday Hardcore Match, where all the props were thoughtfully gift-wrapped. Aw, a crutch? You shouldn’t have! 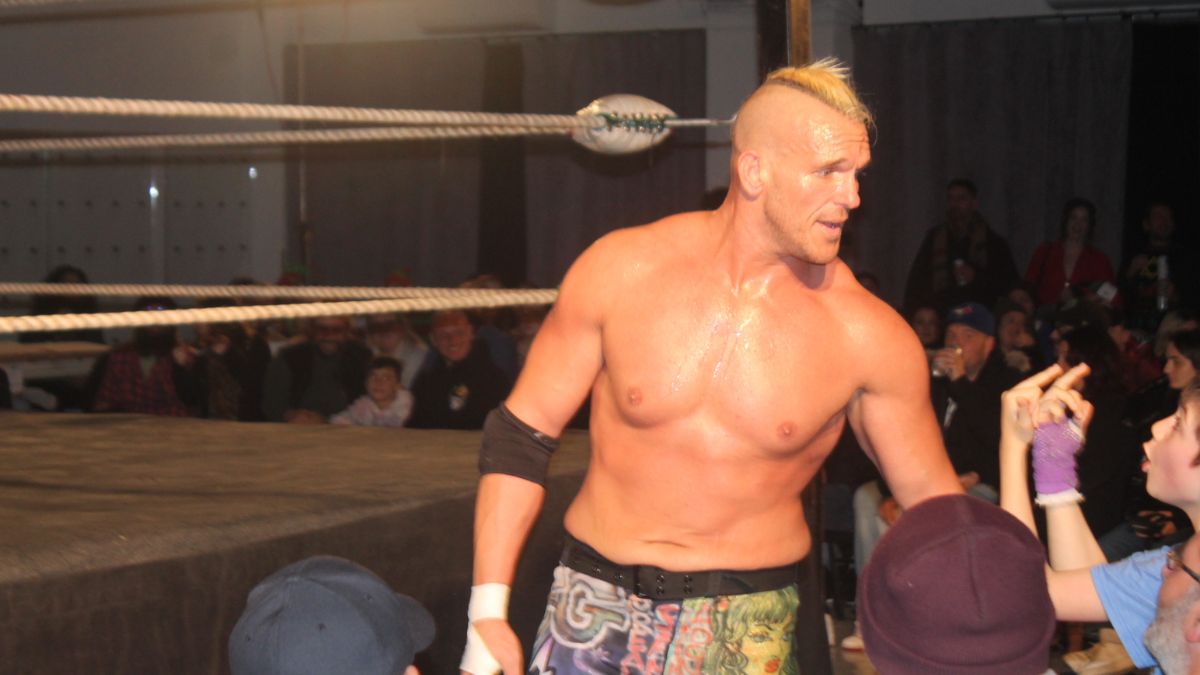 Adonis would be in that conversation too, though he was making his Canadian wrestling debut, odd for a dude from Pittsburgh. He was the first to be allowed microphone time in the ring and built up the crowd only to turn on them and blame Canada. The tallest guy on the card, he’s headlined in Mexico for years, so fit in well with the lucha crowd. I’m looking forward to hear what he rants about in MLW.

Along for the ride from Pittsburgh was Adonis’ better half, Ray Lyn, who was returning to Toronto after many years away. We reminisced later about some of the venues she had worked in previously around town. She had a good bout with Jody Threat, who deserves mention on her own. 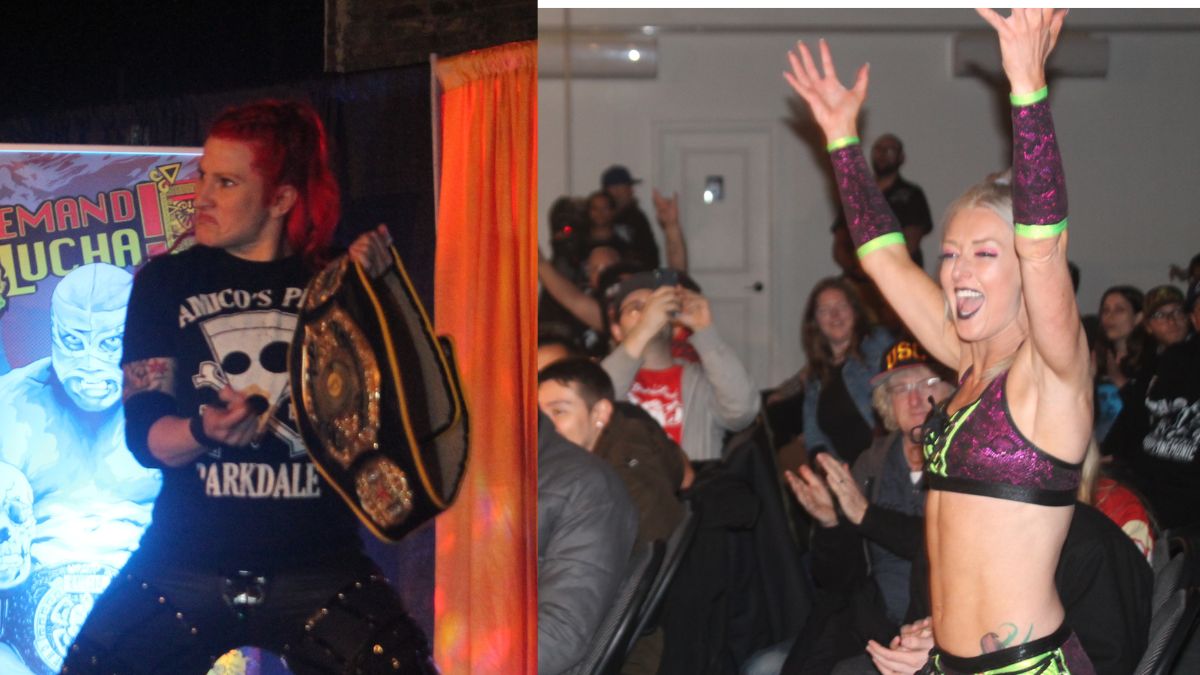 Fellow SlamWrestling.net writer Joseph Casciaro was there with me — his first-ever indy show somehow, but he’s only 21 — and he’d been at the AEW Dark taping where Threat faced Athena in the potato-fest (there I go being a smark myself). He remarked how over she was at the Coca-Cola Coliseum in October with the vocal Toronto crowd, but how different it was being with her people. Clad in a T-shirt promoting Amico’s Italian Pizza, a sponsor across the street, she had the fans in the palm of her hand from the start. Their chant of “Pizza! Pizza!” was out of the blue for me, a chant I’d only heard at hockey or baseball games where Pizza Pizza rewarded ticket buyers with a free slice after a certain number of goals or runs.

The main event was Gringo Loco keeping his Premier Championship against Delirious in a pretty entertaining bout that ended the right way, with a Ring of Honor-like show of respect handshake and hug. Not so great was the unnecessary foul language in promos on a card advertised as all-ages (did I mention already I’m an old fuddy-duddy?). That was probably my main complaint about the show, so there’s that. The venue itself, which hasn’t been open very long, is beautiful, with incredibly high ceilings; it’s amazing that The Parkdale Hall was once a theater before it was a warehouse (though the coffee bar without coffee was odd). 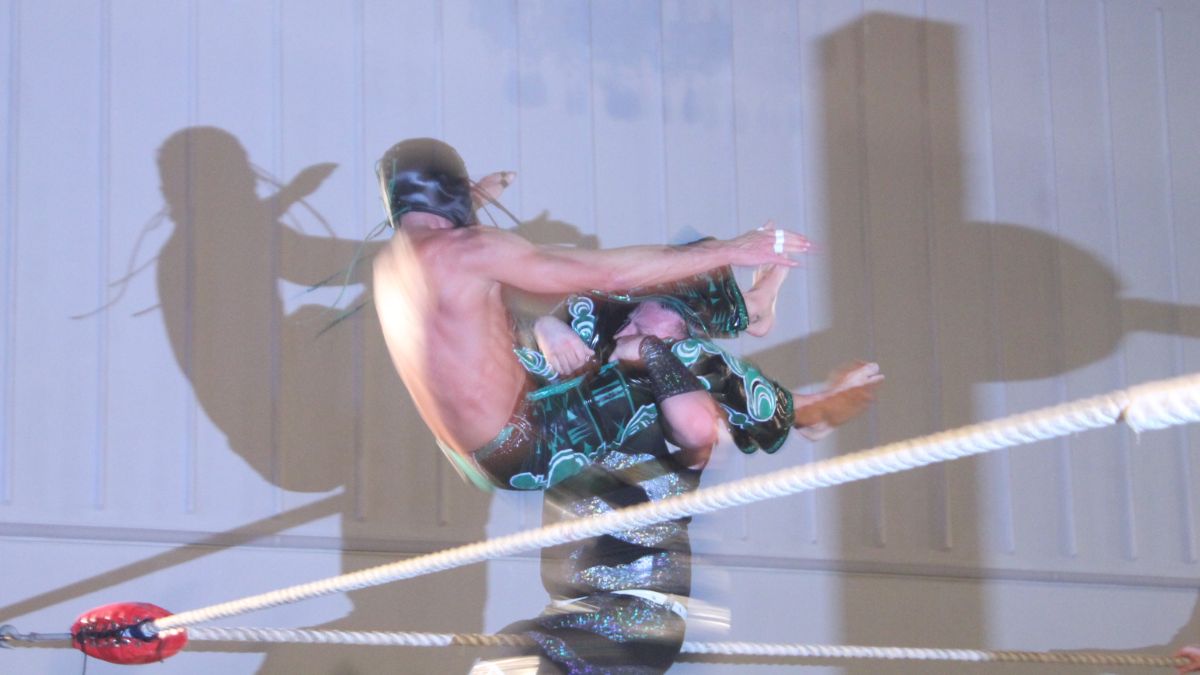 Sometimes the flash works in your favor, as with Gringo Loco versus Delirious.

I think it was also a little eye-opening for Casciaro to meet many of the people who actually make the show happen, the ones who don’t get seen on TV like the announcers, referees and wrestlers. There are the promoters, the security, the people who set up and take down the ring, the merch peddlers, and even the loud, bombastic pizza man. Again, I’ve been there and done that plenty of times, and have always had mad respect for the wacky people who make up the entirety of the pro wrestling business.

My message, the takeaway, would be that us veteran fans need the occasional reminder to stop being so smart and just be a fan sometimes.