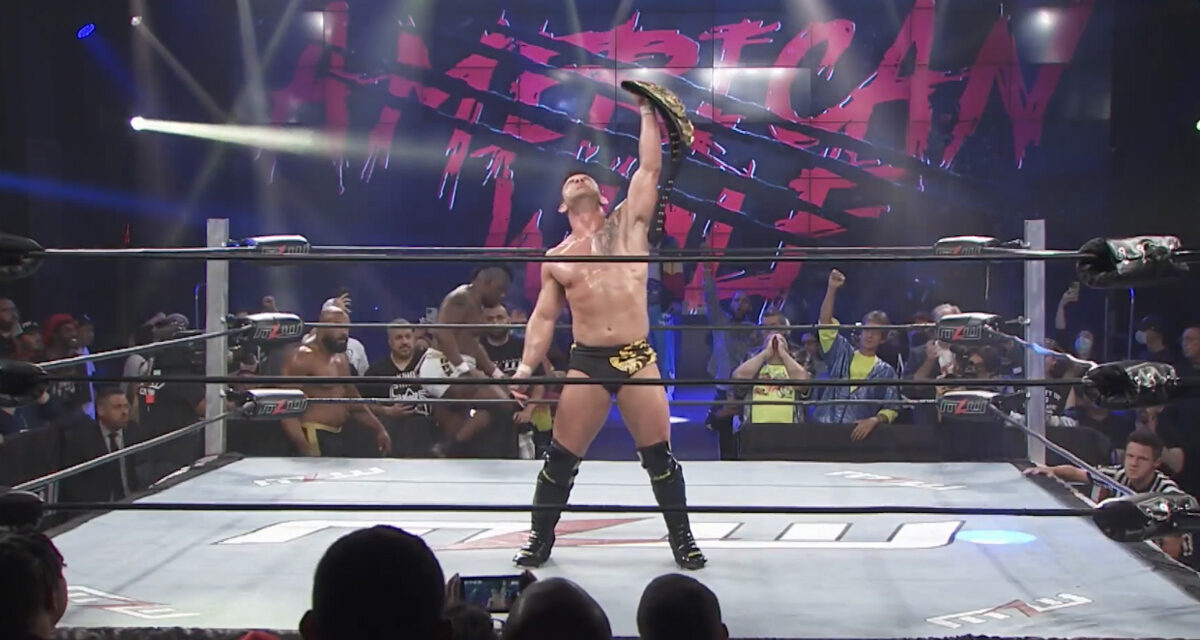 We’re in for a great night. Davey Richards gets to challenge the National Openweight Champion Alex Kane for the title, which is yet another championship tag I’ve never heard of. Well… such is life. My life, really.

Anyway, why don’t we get into it?

As we start off the night, Los Maximos decide to exit the ring, so they could demonstrate how second-rate their opponents are to them by shrugging it off. I call that stupidity. Turning your back on your opponents will result in the beating of their lives due to arrogance. We’ve seen this plenty of times.

Because of their need to behave like peacocks, the Samoan SWAT Team meet them outside the ring. Jose even manages to avoid them temporarily then attempts to jump Juicy Finau, only to get caught like a baby mid-air along with his tag partner. Lance Anoa’i comes in and lands on everyone, including Juicy, as an assist.

Los Maximos has Lance in a pickle when they decide to play a double team on their opponent to help slow him down. Surprisingly, Juicy didn’t jump in to rescue his friend, rather he yelled at the official for not having things under control like the lost pigeon he is.

Joel manages to land a senton on top of Lance for a failed cover. This is immediately followed by a sneaky tag by Juicy to Lance, which Jose hasn’t noticed. Lance hooks his legs around Jose’s neck then swings him into the turnbuckles before Juicy comes in.

Los Maximos think they had the drop on Juicy when Jose got out of the way in time prior to getting squished, they tried to bulldoze Juicy only for him to shock Maximos with a spinebuster that ploughs them both. Ouch!

Juicy rushes in to help Lance, whose been backed into a corner, by lifting both Maximos members, carries them to the center of the ring then Samoan Drops them, so Lance could splash from the top rope for a beautiful win. They made their family look like an unbeatable wrecking crew.

Mance Warner is still angry towards Mads Krugger for interrupting him at Battle Riot, so now, Warner is trying to figure what kind of fight should he and Krugger have to settle all their animosity. Apparently, Warner doesn’t care if the match involves a flaming table, he wants Mads in the ring no matter who gets burned. Oh, I still like Mance’s accent, it’s amazingly soothing.

The “Boom-ay-hey” fight club are questioning Myron Reed’s loyalties because he dipped when one of the original members needed help. Oop. Treachery, I love it.

Anyway, the love couple, Alicia Atout and Richard Holliday address Alex Hammerstone on how dumb he truly is to face Holliday. The man’s name is “Holliday”, what is there to be afraid of? Hammerstone will be fine. 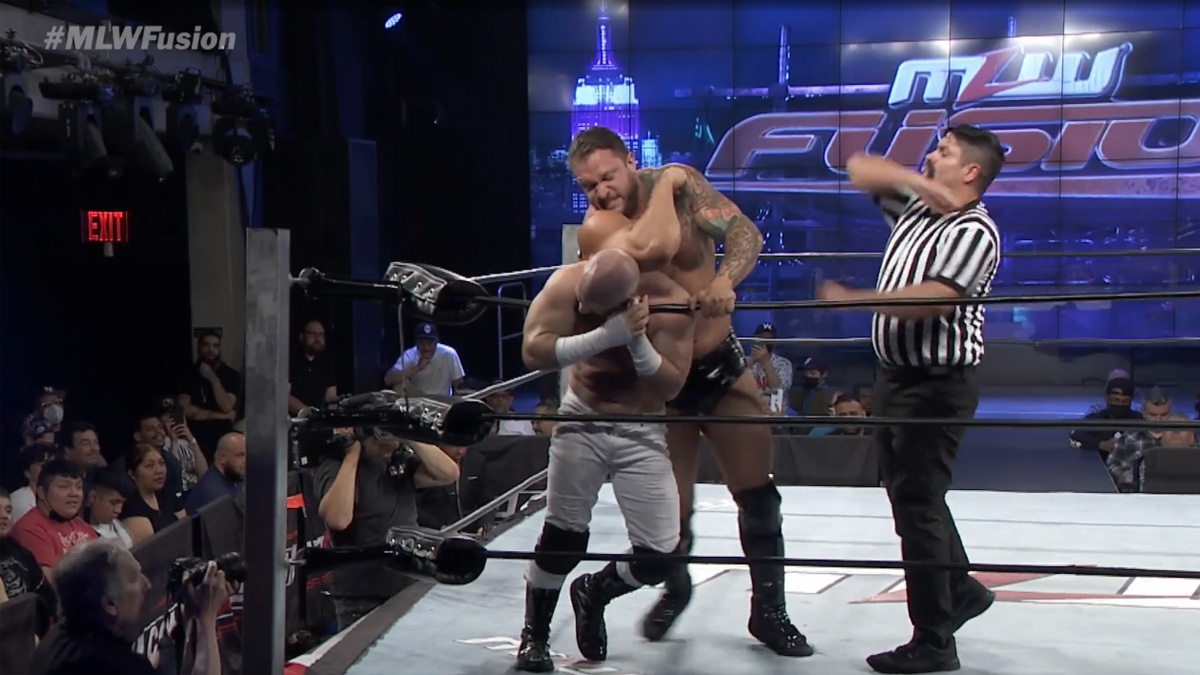 Of course he changed his name just for this occasion. Kross is one freaky man. Every times I see his face on posters, I laugh and gasps at the same time. Ha!

I also just noticed something, Matt Cross kind of resembles Ciampa from WWE, no? His little brother, maybe. Is it just me? Battle of the Krosses/Crosses is nigh. Ha! I had to say that at least once.

Most of the beginning of this match has been Killer Kross hovering over Matt like some kind of vulture before sending a boot to Matt’s face then proceeds to punching his head repeatedly. Killer Kross’ MO.

Kross had this match in his hands for the most part, but Matt does come back with a kick to Kross’ abdomen… before getting turned inside outside with a wicked close line by Killer. Oof, that didn’t last.

Kross has Cross in a face lock, applying pressure onto his wind pips. Matt wiggles himself out, elbows Killer in the nose then rotates his opponent around before going for a cover that Killer jumps out of.

Matt climbs the top ropes, looking to fly and misses. Killer later catches Matt in mid-air to brutally plant him on his head for a victorious win.

There’s a strange mystery going on backstage where this is the second time we found a wrestler unconscious with a card written “AO” or “VO” decorating their knocked out bodies. Hammerstone questions Cesar Durna for answers, sadly, he doesn’t know. Or so he says. The Red mask-wearing Luchador looks suspicious to me.

But that’s not the only weird thing going on, people are also wondering whose financing the “Boom-ay-hey” fight club that both Alex Kane and Mr. Thomas are being so tight-lipped about. Hmm? Who indeed.

As we begin, Alex has Davey in an arm lock that’s being twisted from behind. Ah, Ronda Rousey would be so proud. For the majority of the fight, it’s all tumbles and fumbles, really. Fun to watch, though.

Davey places Alex into an ankle lock that Kane swiftly gets out of to recalibrate himself before going after Richards again with a boot to Davey’s face followed by a powerful suplex, a slide kick and a heavy splash on the apron. That was strong enough to put Davey away, yet he comes back.

Alex shocks us with an Irish Whip to Davey’s back using the turnbuckles as a weapon. The way Richards bounced right off of that looked mega painful. “You ain’t got it, dog!” is what Alex said to Davey. That backtalk is enough for Richards to retaliate with multiple punches to Alex’s stomach and headbutts causing Kane to fade. This is Davey’s chance to suplex Alex from the top rope and onto the mat, which made the entire ring shake. I thought the ring broke at some point…

Davey is looking to suplex Kane again, but Alex counters with hard blows to the side of Richards’ face, which he counters with a whiplash type of kick to Alex’s head causing him to spiral.

Richards capitalizes with a stump to Alex’s abdomen, thinking it was over, but Kane jumps out after ONE count. Impressive. The guys at the announcement table were in a jolt. But that force left Kane winded.

Davey doesn’t give up, so he powerbombs Alex on back for a long-awaited win. I guess Kane was wrong about Davey not having it anymore, when he had more than he could ever imagine. Richards is the one walking out with the gold.

Although, Davey should be celebrating, one person isn’t happy he won. Myron Reed. When he stood at the entranceway of the ramp, Reed looked like a petulant child. Ha! Not really as intimidating as he thought.