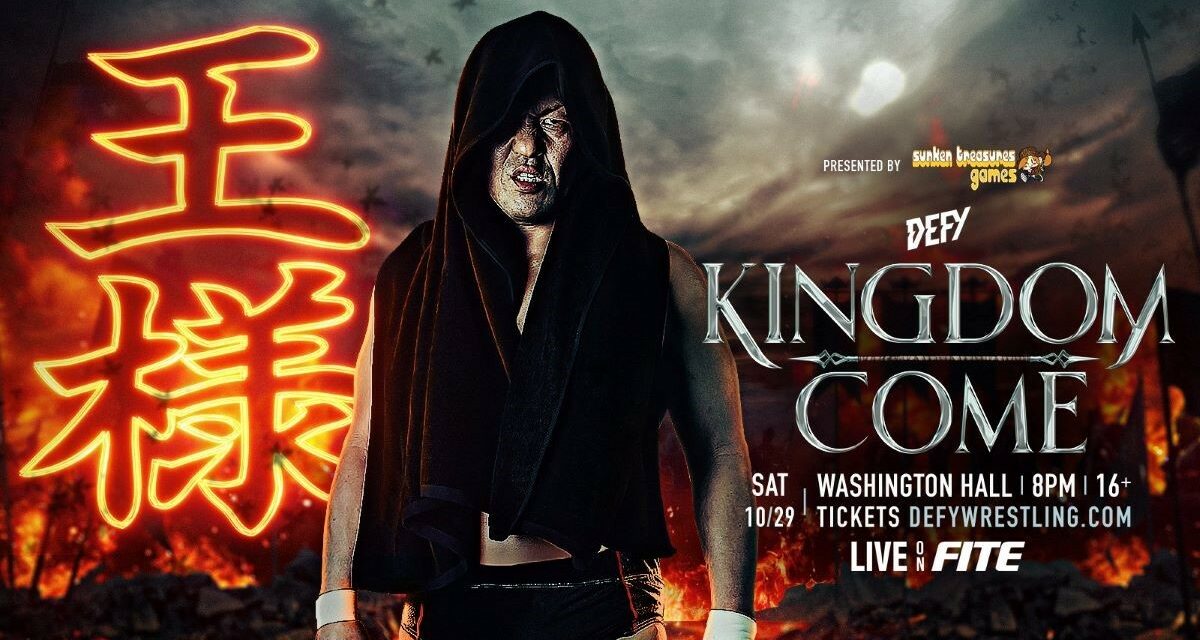 Thy Kingdom Come, thy will be done, as DEFY comes to you on FITE this Halloweekend with lots of action  for all the DefyAnyts in the Pacific Northwest area of the United States. The main event has Minoru Suzuki face off against “Filthy” Tom Lawlor in a matchup for the ages, and you can believe not only will this have MMA fans mark out, you can be certain the antics will be Filthy.

We come to you from Washington Hall in Seattle, WA. Rich Bocchini and Ethan HD have the call, and the as the fans chant “DEFY,” they throw it to past DEFY tag champs ( I see you, The Midnight Heat!), and that brings us to the First Match of the night for the… 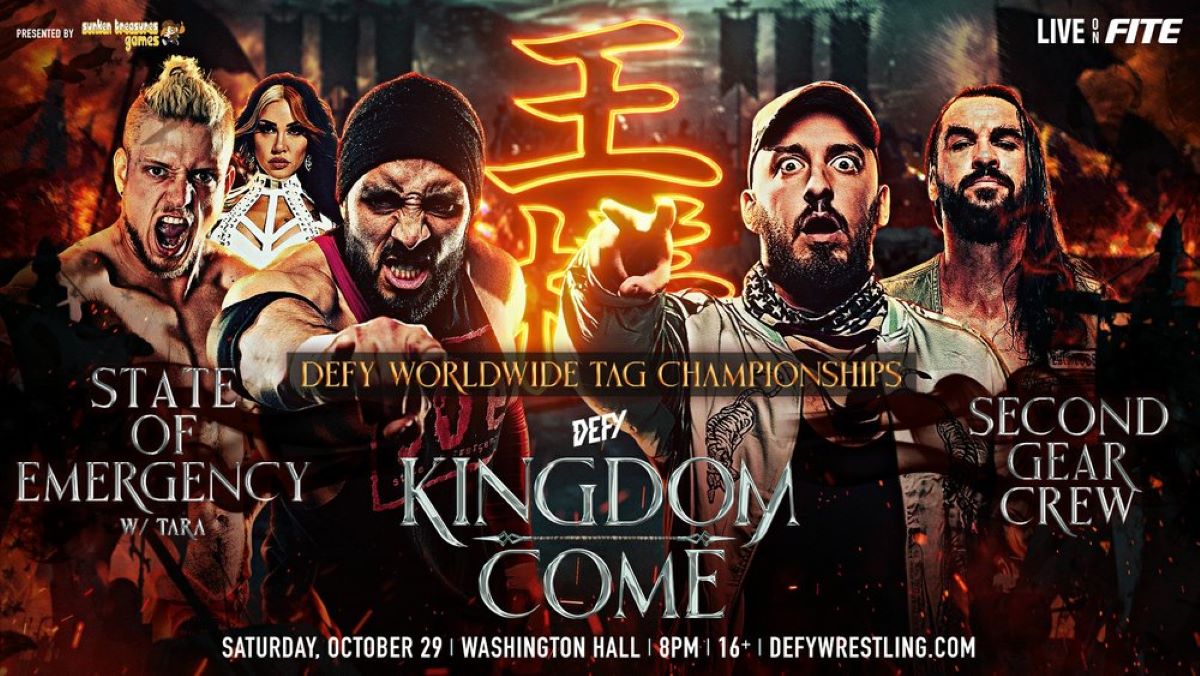 The tag champs come in afterward, and if you’re not familiar with them, SLAM! did an interview with Deville and Wolfe earlier in the year.  Justice is able to outwork Deville and Wolf.  Then a steel chair gets introduced by Warner and things devolve into a Pier Four brawl, where all implements of hardware are involved with steel chairs to the champs, and a door is introduced on two chairs.  Tara tries to interfere and Warner and Justice oblige by sending her through the door (literally).  The Second Gear Crew take a chair to Deville, and then Warner lands a superplex, followed by Justice with a splash and that’s enough to put away the State of Emergency, and that means…

The new champ head back to celebrate with light beers (which feel all sorts of wrong to me, but who am I to argue?).

That leads to the…

At this point, Ricky Gibson of The Midnight Heat joins Bocchini on commentary, and his arm is in a sling from  a separated shoulder injury

(Author’s Message to Gibson:  Hey Ricky!  Get better soon, and let’s see about an interview in the future!)

Anyway, this battle royale is the brainchild of SCHAFF (who we interviewed a couple years back) and Bocchini notes he currently holds the unsanctioned BMF Pacific Northwest championship.  This is designed to see who will retain the title SCHAFF holds.  For the sake of brevity, I’ll just bullet point the eight men who entered, and who got eliminated after the match

Your Winner of the BMF Battle Royale:  SCHAFF

After the match, Judas Iscariot and Travis Williams beat down on SCHAFF, but then the lights go out and the sounds of Guns ‘N Roses/Killers mashup signals to a massive pop for the DEFYants that Randy Myers is back and he comes out to get rid of the brigands. SCHAFF extends a hand and he…accepts. Randy holds on for a hand kiss, but SCHAFF declines and heads to the back.  Myers gets the mic amid “Weirdo Hero” chants to proclaim he is home.

Very heartwarming to see in Seattle, but we have the next match-up between… 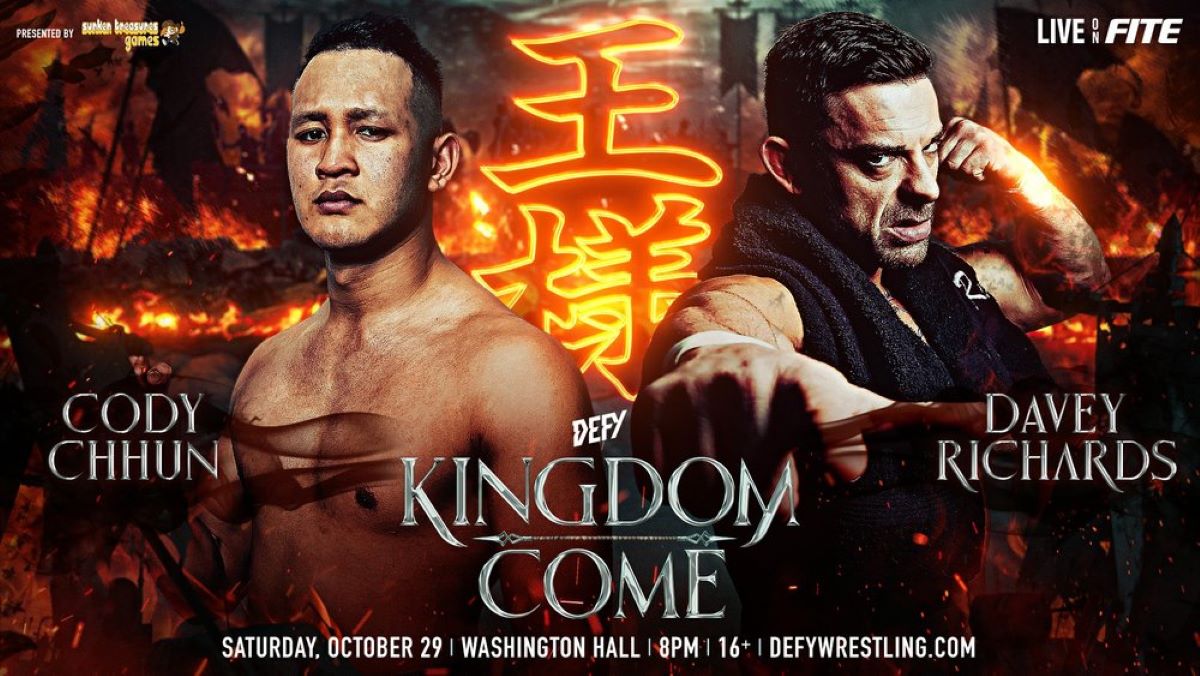 the DEFYants are evenly divided between the two fan favorites, as they chant “F*** Him Up, Dave-y!/ Cody Chhun” chants.  This is a very technical match at the start as Chhun powers through the Test of Strength.  He goes into a straightjacket but Richards reverses to a taste of his own medicine.  Now Richards works over Chhun with a Saito suplex for a two count, and then kicks Chhun off the top turnbuckle.  He follows with a double stomp and then gets Chhun locked into a trailer hitch submission.  Chhun’s knee is hurting as he collapses, and Richards kicks into another gear.  They are throwing bombs at each other and Chhun nails a DDT for a near fall.  Richards gets Chhun’s bad leg trapped between the ropes and he executes a dragon screw leg whip.  He goes up top for a double stomp and Chhun rolls out of the way, thus Richards misses his target.  He attempts a brainbuster but it gets countered by Chhun.  A superplex by Richards from the top turnbuckle gets him a two count, but then he quickly transitions to an ankle lock. Chhun kicks him off, but Richards returns fire with a punt kick and then a double stomp for a close two count.  A brainbuster by Richards gets him another two count, and he cinches in a deep ankle lock to Chhun, who finally taps out.

Richards gets on the mic amid the boos from the DEFYants not happy that he made Chhun submit.  Richards acknowledges that he was raised in the Pacific Northwest, and he was in the scene before there was no scene, and emphasizes that *this* is the scene.  Richards also tells the crowd that Chhun’s got a helluva future.  He concludes by saying that while DEFY is Swerve’s house, it was built on the foundation of the American Wolf and it might be time for him to be a two-time DEFY champ to a huge round of applause.

That brings out Artemis Spencer (another DEFY wrestler SLAM! covered way back when) who calls out Richards and anyone else that gets in his way.  I say, “Yes, please.  I want this!”

Next up we crown a new… 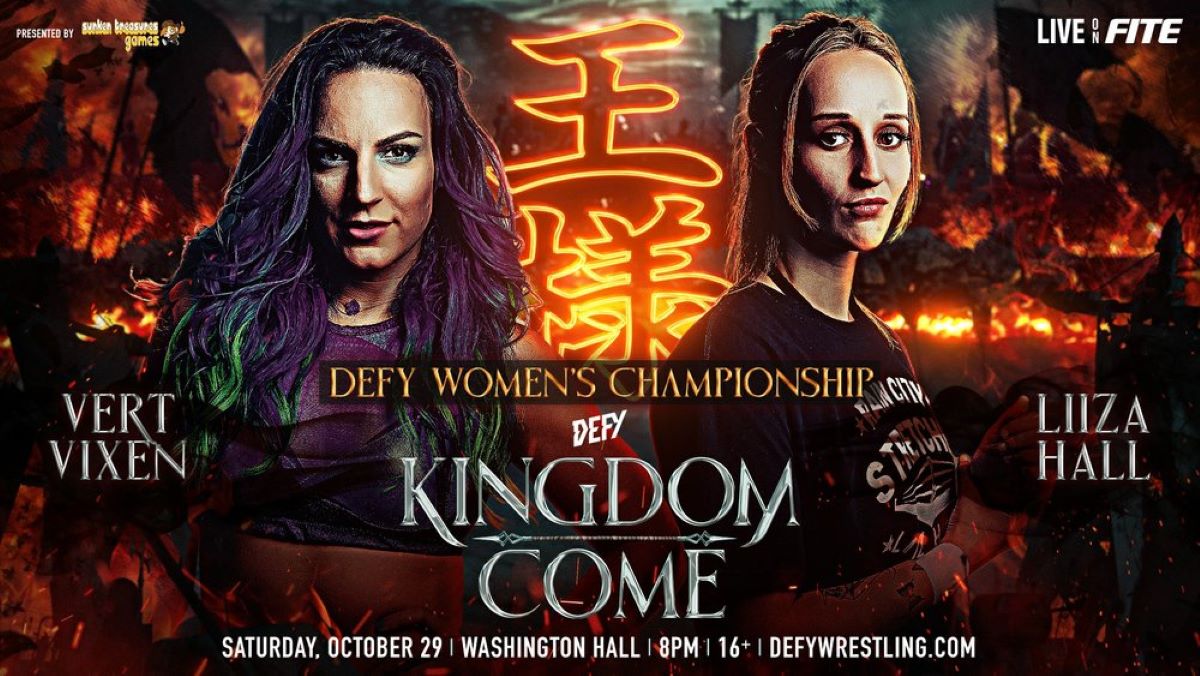 Both women are evenly matched and Hall toys with Vixen, and she is able to pick apart the indie vet, and then…

(For some reason, my screen went blank.  Since I know I didn’t get blackout drunk, I dunno if the problem was on FITE’s side or somewhere else.  But because I refuse to be scapegoated, let’s lay the blame at…hmmm.  Xfinity it is.  At least it wasn’t an ad)

Anyway, this is a hard-fought match, but the end comes when Vixen gets a springboard enzugiri to Hall’s melon, and she covers for the pin, which means…

Your Winner, and the First DEFY Women’s Champion:  Vert Vixen

Vixen extends her hand in a show of sportsmanship, and Liza who is still dejected over the loss accepts.

Let’s go to something Lucha-rific with… 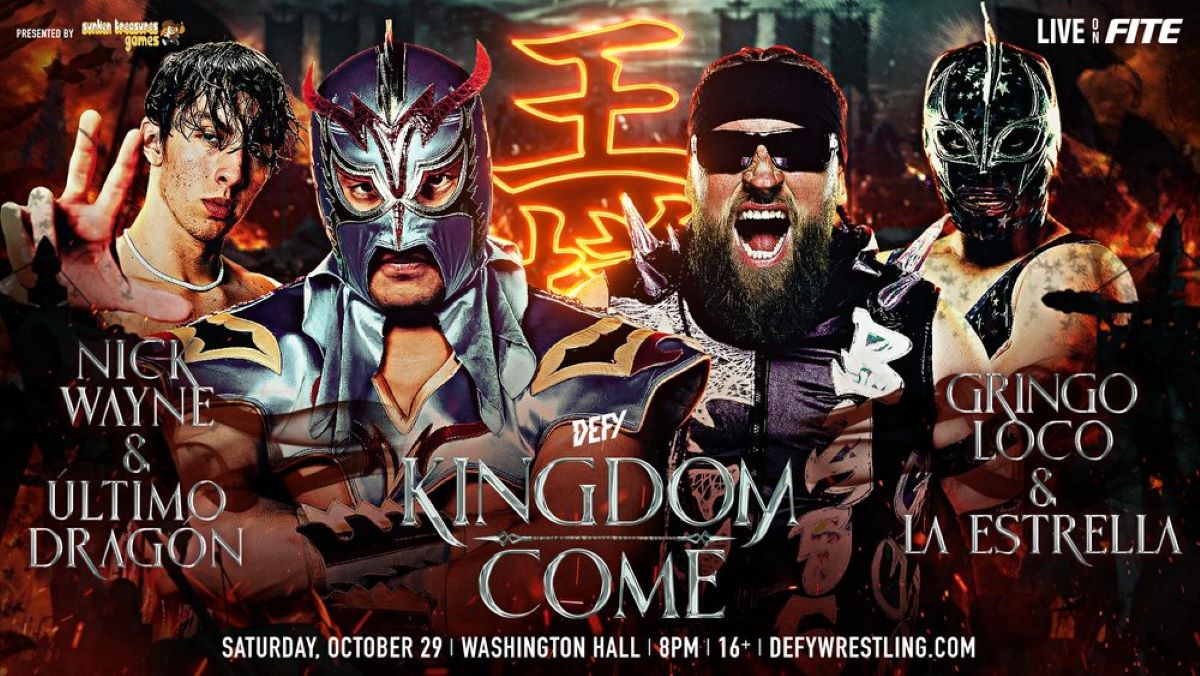 The son of Pacific Northwest legend Buddy Wayne gets as much of a pop as Ultimo Dragon himself (and you should check the profile we did on him recently) with the DEFYant Ones chanting, “Nick! Nick! Nick F’n Wayne!”

This is a very fast contest and Mucha Lucha is the name of the game, as it is contested under Lucha Rules. Wayne is able to stay on pace with the lucha stars, and Dragon hasn’t lost a step, either.

The high points of the match has La Estrella with a smooth rope-assisted snap German suplex to Wayne, and then there was an insane spot that had Wayne do a moonsault from the top turnbuckle to the outside of the ring on Loco, who caught him mid-air but Wayne smoothly transitions to a tornado DDT on the concrete floor.  While the match was spotty at points, Dragon delivers La Magistral to Estrella to get the pin and the win.

Your Winners via Pinfall:  Nick Wayne and Ultimo Dragon

There’s a nice video package that shows Lawlor and Suzuki in their prime in MMA, and then transitioning to the sport of professional wrestling, which now brings up to the Main Event we’ve all been waiting for… 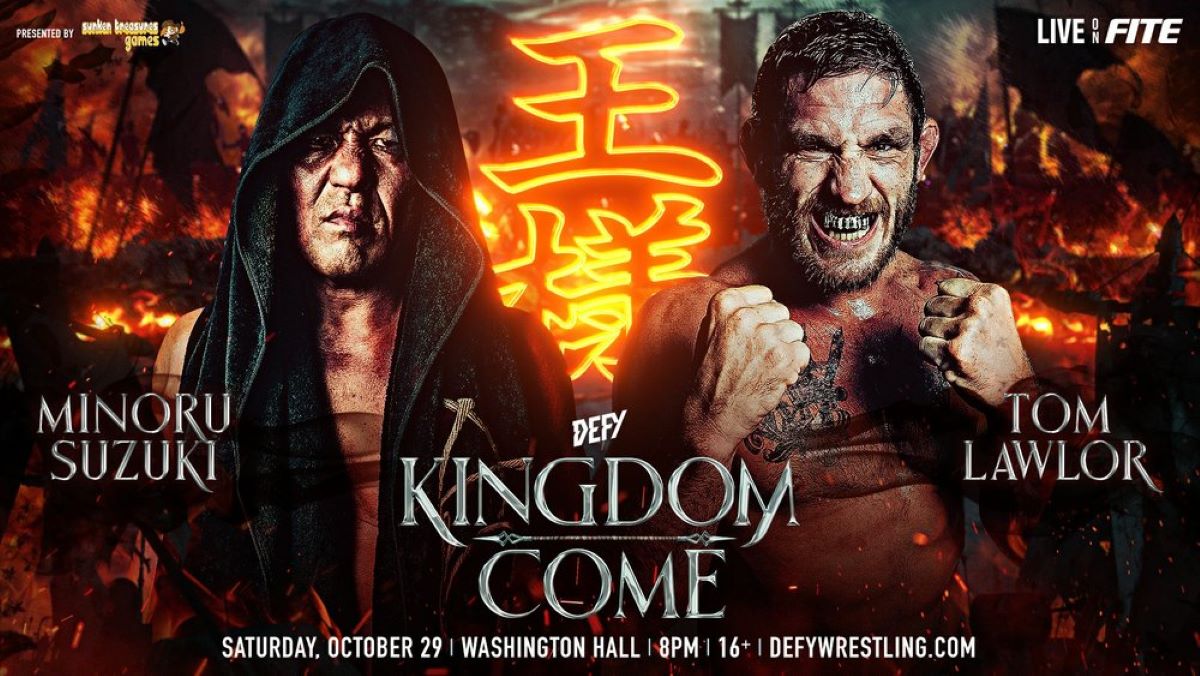 Washington Hall gives a massive pop for Suzuki as he parted the curtain to head to the ring.  As the bell rings, Lawlor goes into his trademark antics to get in his head, but Suzuki stares daggers at The Filthy One.  This is great catch wrestling from both men, and there is no give from either side.  At one point during the match, they trade chops to the chest.  While Suzuki is bleeding from his torso from the blow by Lawlor, he barely flinches. Meanwhile, Lawlor sells Suzuki’s chops like they were shotgun blasts filled with rock salt.

Suzuki gets Lawlor’s arm in a triangle hold while dangling from the top turnbuckle ropes to pull it out of his socket, and then the violence goes out of the ring with Suzuki slamming a steel chair to his back.  Back in the ring, Lawlor gets Filthy and uses ropes for an ankle lock on Suzuki, but that tactic doesn’t last.  This match is all Suzuki, but Lawlor gets his licks in with a desperation slam/tombstone-like Piledriver that drops him on his head.  Lawlor covers for a two count, and Suzuki goes back to work.  Lawlor attempts a rear naked choke on Suzuki, but The Wrestling King reverses to his own Rear naked choke.  As Lawlor fades, Suzuki finishes him off with the Gotch-style Piledriver for the one, two, and three.

Your Winner via Pinfall:  Minoru Suzuki

After the match, Suzuki shakes the ref’s hand and almost out him in the Gotch-style Piledriver, before releasing as if to say “just kidding” and the poor ref almost saw his life flash before his eyes, and the show fades.

First time watching the DEFY product, and they definitely had bell-to-bell action, with no lags.  Suzuki/Lawlor was the best of the night, and the sleeper match has to be Chhun/Richards.

Until next time, I DEFY you to watch this Pacific Northwest promotion.