Impact: ‘Twas the night before Bound for Glory… 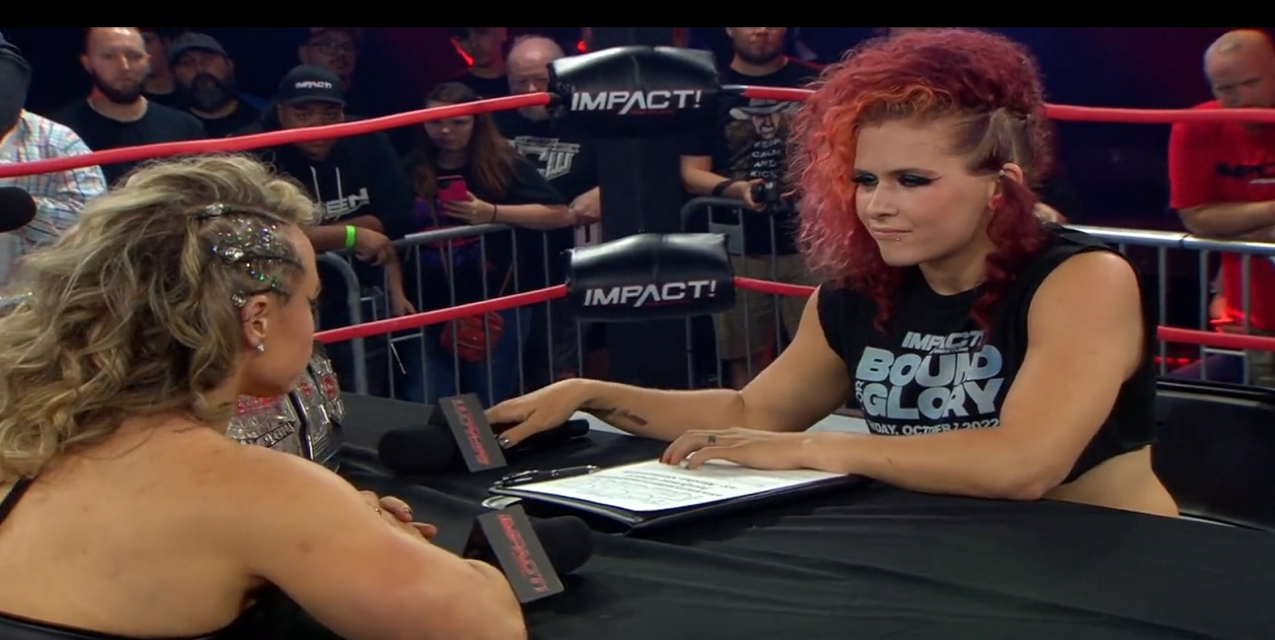 Greetings and salutations all. We are just a night away from Bound for Glory. While the biggest show of the year for Impact Wrestling may be missing “Star Power”, the currently scheduled matches have been well built and with one more episode to go I am interested in seeing how they hanle in-ring vs promos on the eve of Bound for Glory. Without further ado, let’s get to it.

The show opened with a touching and classy tribute image for Antonio Inoki.

Frankie Kazarian is getting ready for his X-Division championship match and Kenny King is looking to play spoiler. The match opened up with a great showing of technical wrestling from both men. We then got a string of pins via roll ups from them. Kazarian went for an O’Connor roll but King countered this with a clothesline. Bad luck continued for Kazarian as he missed a Guillotine Leg Drop and while he rested his face on the ropes, King kicked the ropes to make this warm up match a not so memorable one.

.@KennyKingPb2 just dropped @FrankieKazarian directly on his head and followed it up with a TIGER DRIVER! #IMPACTonAXSTV pic.twitter.com/21bv13d9UM

With Kazarian on the outside, King went for a Suicide Dive. Once they were back in the ring King hit Kazarian with his own Springboard leg drop and went for a pin but it was only good enough for a 2-count. With both men back in the ring, we got another set of roll ups and pin attempts from the men. Kazarian then quickly hit a belly-to-belly straight to the corner which made King land on his head. Kazarian connected with a float over spinning neckbreaker which was only good enough for a 2-count. King went for a TKO but Kazarian countered with a Crossface Chicken Wing which forced King to submit to give Kazarian some momentum leading into his huge match tomorrow.

A promo video aired highlighting the ongoing feud between Impact World Champion, Josh Alexander and his opponent Eddie Edwards. The video highlighted Edwards road to becoming number one contender and getting his chance at Bound For Glory. Once again, a very well done video hyping the main event of Bound for Glory.

We see a video dedicated to X-Division champion, Mike Bailey. Mike Bailey cut a promo as a voice over to the video. His goal for Bound for Glory is that he feels he needs to beat Kazarian in order to cement his legacy as champion.

I am so proud of @SpeedballBailey every single day…but tomorrow night will be extra special. #BoundForGlory https://t.co/PR1g0nHmaJ

Mia Yim’s Bound for Glory opponent, Mickie James joined the commentary booth for this match. As the match started, Yim took full control of the match. Yim hit a hirricanrana on Shaw right by the commentary table which sent a message straight to James. Yim then got Shaw in a Guillotine Choke but Shaw used her momentum and ran backwards squashing Yim to the corner to force a break in the submission hold. Shaw then set up Yim on the ropes and hit a Tornillo on Yim. Yim came back with chops to Shaw.

The match was evenly split and Shaw hit a spinning Kick but Yim came right back and hit a headbutt on Shaw which caused both women to hit the floor. Yim was the first up and she hit a cannonball on Shaw in the corner and went for a pin which was broken up by Shaw after a rope break. Shaw then went for a Knee Strike but Yim countered with an Eat Da Feet for the pin and the win.

After the match. Mickie James and Mia Yim came face to face to hype ttheir match at Bound for Glory.

.@MickieJames and @MiaYim are FACE TO FACE ahead of their match TOMORROW NIGHT at #BoundForGlory!

A video aired showing the rules for the Call Your Shot Gauntlet Match highlighting past winners.

We saw highlights of Killer Kelly choking out the referee during her match with Tasha Steelz. Kelly then announced that she would be in the Call Your Shot Battle Gauntlet Match. Tasha Steelz and Savanah Evans attacked Kelly.

We see a video of future Impact Hall of Famer Raven’s debut from 2003. He talked about his induction.

Brian Myers is walking backstage bragging how he has his open challenge at Bound for Glory on Friday night. One of Eric Young’s students yelled things at Myers which cause Deirious to yell at said random student which caused Myers to yell at some random woman who he thought was affiliated with Black Taurus.

.@Myers_Wrestling has all kinds of people to look out for TOMORROW NIGHT on the #CountdownToBoundForGlory when he puts his Digital Media Championship on the line in an OPEN CHALLENGE!

The match started fast and furious with Macling and Moose trading punches to one another as they headed to the corner of the ring. Callihan was going to separate the two but he ended up turning his back and told them to “Keep Going” which we now know what type of match we are getting. Maclin hit a suicide dive on Moose which seemed to re-open a cut he had from Victory Road. Moose recovered and the two men brawled around ringside while Callihan still pretty much ignored the rules of wrestling.

Moose then went for a rolling Elbow but Maclin hit a forearm and followed this up with a Spear. As Maclin went for a pin, Callihan slowly made his way over and slowly counted which angered Maclin. Moose ended up hitting a Spear to Maclin but Callihan decided to Piledrive both Moose and Maclin and rolled Maclin over Moose for the pin.

Joe Hendry cut Shogun, Jack Price, and Jason Hotch off and when Hotch announced he wanted to enter the Call Your Shot Gauntlet. Hendry’s music hit and EVERYONE danced!

Here is your squash match of the week. VXT watched this match from the ramp. Jessika hit the Sickishi driver for the pin and win.

VXT was interviewed by Gia Miller and they essentially said they will win and reminded Jessika that the last time they faced off with her she went from Havok to Jessika.

Taven wanted to end this match quickly as he went for a Climax but Shelley countered this into a Border City Stretch. Taven broke from the hold and went to the outside to regroup. After a few moments, Taven went back into the ring and landed a dropkick on Shelley. Shelley attempted a comeback but was tripped by Bennett while the red was distracted. Taven then raked the eyes of Shelley and hit a Butterfly Suplex into a backbreaker. Taven went for a pin but Shelley got up at two.

Taven then came right back and hit a Russian Legsweep and followed it up with a Liosault but Shelly moved out of the way. Shelley finally had the momentum in the match and landed a Kitchen Sink Knee on Taven and locked in a Border City Stretch. Taven fought right out of the stretch. Shelley then hit an arm breaker on Taven but Taven turned this right around and hit a Spinning Kick followed by a Lionsault but this was only good for a two-count.

Shelley then came right back and hit a flatliner on the middle turnbuckle and went right into a Tornado DDT. Bennett then jumped on the apron but Sabin ran over to pull him down. Back in the ring, Shelley hit a Sliced Bread and went for a pin BUT Maria put Taven’s leg on the rope. Taven was now back up and landed a Springboard kick on Shelley and went for a Frog Splash but landed right on Shelley’s Knees. Maria then distracted the ref and Taven hit a running Knee and went for a pin but it wasn’t enough to win the match. Taven went for a Climax but Shelley countered it and hit a Shell Shock for the WIN.

.@TheEddieEdwards confronted @Walking_Weapon after his interview with @TomHannifan on OUTSIDE THE ROPES… But he had bigger problems when @MrsAIPAlisha confronted HIM with an ultimatum!!!

Slamovich grabbed the mic to say something but put had second thoughts and instead signed the contract. Grace talked about how she respected Slamovich, but quickly said that she wasn’t ready to give up the Knockout’s Championship and she was going to bring the fight to Slamovich.

The Knockouts World Champion @JordynneGrace is HERE and has STRONG words for @mashaslamovich!

Slamovich grabbed a second mic and spoke in Russian eventuall saying “Masha’s going to kill you”. Slamovich then attacked Grace and hit a Snow plow through the table to end the show.

The inevitable is know. My time has come. https://t.co/VNzs59u1LF

This was the go-home show before Bound For Glory. Every match for the biggest show of the year was shown and promoted in some shape, way, or form so that was a positive. Overall, fun show with good in-ring. While the overall star power might be missing from Bound for Glory, the matches have been well built and seem good on paper.