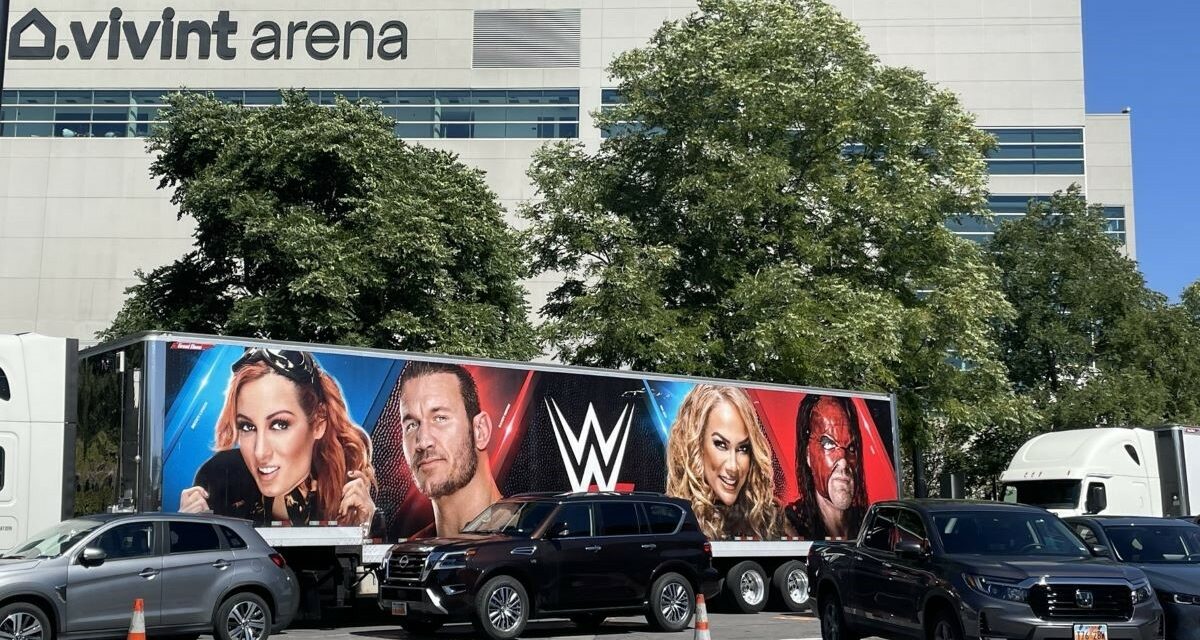 This was the first time since the pandemic hit that the World Wrestling Entertainment has done a live show in the Beehive State of my home, Salt Lake City, UT.  The last time WWE did a show was in January of 2020 when Monday Night Raw still managed to hold a live show amidst a blizzard that snarled up traffic and made traveling conditions near impossible.   But at that time I witnessed the Utah fans come out despite those conditions, so as I rolled up with my friend John in tow, I was curious about what type of crowd would show up at the home of the Utah Jazz.

Part of why I was curious how many fans would show up is because Salt Lake City was hosting another event called FanX Comic Convention (for those not familiar, think of it like San Diego Comic-Con, but…you know, more successful).  As I rolled into downtown to the Vivint for a much needed pregame at the local bars, the streets of Salt Lake had a variety of interesting characters.  For every wrestling shirt I spotted in the crowd, there were at least three or four individuals in various cosplay.  Forget Austin, TX, we need to Keep Salt Lake Weird!

As John and I settled into our seats near ringside, the arena began to fill up.  To give some scope, The Vivint Arena can house up to 20,000, whereas The Maverick Center in West Valley City, UT can hold a maximum of 12,000.  It’s important to know this because, in my lifetime, WWE has primarily held its house shows and a handful of live Smackdown shows at the Maverick Center.

As the arena filled to near capacity (my friend John surmised the arena had approximately 15,000 in attendance), the fans started to get excited during the pre-show video package to hype up the crowd.  Then the crowd really got excited for a dark match that consisted of Ricochet and Madcap Moss versus the team of Los Lotharios (Angel Garza and Humberto).  It was a good back-and-forth match, but the end came with Moss getting a spear to Garza in the corner, and then Ricochet finished up with a shoot star press from the top turnbuckle.

For there, it was the regular Smackdown show (which I recommend checking on the results from our current Slam! writer Shelby-Liza Ndumbi), but there may be elements of the show that might have been confusing.  First of all, as the Bloodline entered at the start of the show, the fans in Vivint Arena erupted in a massive pop for Roman Reigns and company.  Now Vivint has historically been a noisy place during Jazz games, and this is no different.  It might surprise some fans to see how hard Salt Lake City was cheering for Reigns and company during the broadcast.

A quick cultural aside:  most people are probably used to Utah being the home of the Church of Jesus Christ of Latter-Day Saints (you know, the Mormons).  That conjures images of Utah being predominantly white and Christian.  In the last twenty years or so, Utah’s demographic has changed especially in metropolitan cities like Salt Lake City and Ogden and to some extent Provo as there has been a growing population of Pacific Islanders that have come to live in Utah.  There are various reasons Pacific Islanders from Samoa to Tonga and points in between come to live in The Beehive State, but they are definitely part of Utah’s emphasis on family.  It should also be noted that three rows ahead of me and my friend was a group of Samoans in attendance, and they were invested in cheering on not just Reigns and The Usos, but as usos in general.

This is also important to note because as the main event between The Usos and the Brawling Brutes went to commercial before the match started, Jey Uso slid out of the ring and greeted the Samoan fans at ringside, and you could tell that was the highlight of their night.  After the match ended with The Usos defending their Undisputed Tag Team titles successfully and the show went off the air,  they went back to the Samoan fans and smiled for selfies.

Other interesting notes on this Smackdown episode when the cameras weren’t rolling was when WWE offered a Stone Cold T-Shirt with the words “Salt Lake 3:16.”  Plus, other moments had Vivint Arena go black with the haunting music of Grace Slick from Jefferson Airplane sing “White Rabbit” acapella, and the fans in attendance expecting to see the Eater of Worlds turned on their cellphone lights to have the “fireflies” alight the ring.  Once the song got to the crescendo of “feed your head”, the TitanTron turned red before quickly going to black.  No Bray Wyatt sighting for you, despite any chatter you may have heard online.

Also of note, there was a point in the show WWE had a “WWE Universe Cam” that showed the many fans in attendance on the same TitanTron.  All sorts of fans were happy to see themselves on the big screen, but the surprise pop of that was seeing Stephen Amell’s face on the cam.  While he hasn’t been involved with WWE for a number of years, upon further research he was listed as coming to town for FanX.

After Smackdown went off the air, fans were treated to a Six-man tag team match between The Street Profits and Shinsuke Nakamura against Imperium.  A few highlights of that match had fans loudly chant “Wal-Ter” at the newly christened Gunther whenever he stepped in the ring.  Also, Nakamura, along with Angelo Dawkins and Montez Ford, gave stereo Bad Vibrations in the corner to Ludwig Kaiser, and Ford stayed on the move much longer than needed before Dawkins had to pull his tag partner off before he had too much fun.  The end came when Nakamura delivered the Kinshasa to Kaiser to get the win for the team.  As Imperium limped to the back, Nakamura and The Street Profits lingered a little longer to celebrate with the fans at ringside.

While Utah is not considered a wrestling town unlike places back east or even on the west coast of the United States, it is proving over time that it has a growing fanbase. 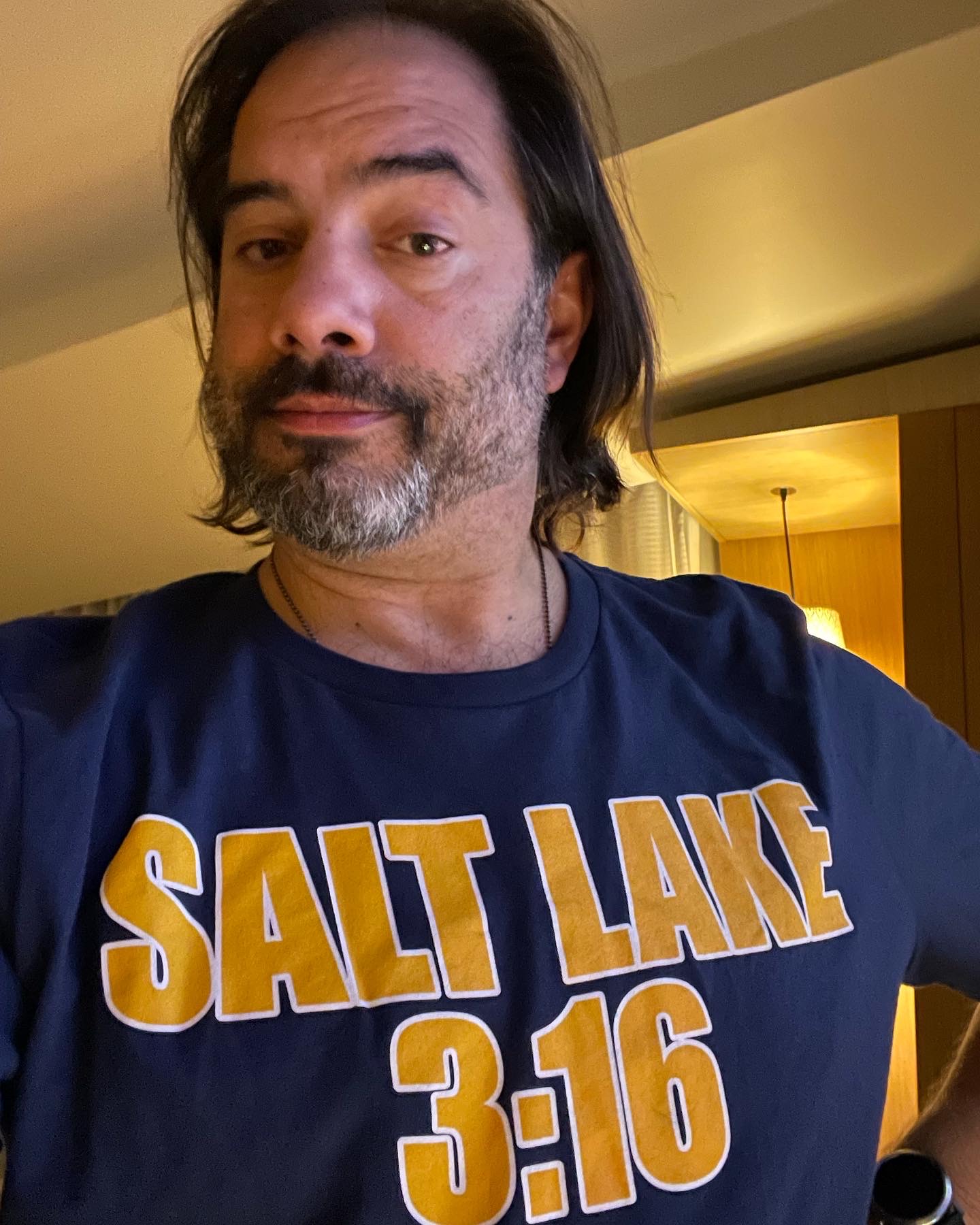 From the Author’s Camera Roll.